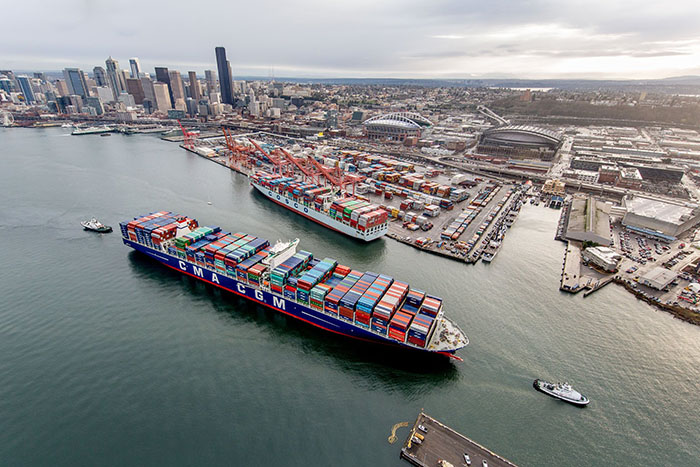 The Port of Seattle's T-46 terminal is now under the control of Mediterranean Shipping Co.'s terminal unit.

Terminal Investment has concluded the acquisition with Hyundai Merchant Marine, with TIL taking an 80 percent stake and the Korean carrier the remaining 20 percent. HMM’s stake enables it to expand its West Coast slot allocation and get the same port tariff rates as MSC, while improving the carrier’s sales competitiveness in the Asia-US market.

TTI leases and operates container terminals in the US West Coast ports of Long Beach and Seattle. The terminal in Long Beach is the largest in the port complex, and its traffic fell from about 1.3 million TEUs a year to about 650,000 after Hanjin’s failure, according to court testimony on Hanjin’s bankruptcy. Representatives of Hanjin Shipping said the loss of Hanjin’s cargo volume meant TTI started operating in the red, ending 2016 with a loss of $37 million in earnings before interest, tax, depreciation, and amortization.

The deal required TIL to pay $78 million, and forgive $54 million owed by Hanjin Shipping to TTI for accounts receivable.

“We are very pleased to be able to confirm the completion of the acquisition process, giving our employees, customers, and other stakeholders every confidence in our future plans,” said Alistair Baillie, president of TIL.

“Our focus throughout the acquisition consultation has been, and will continue to be, rebuilding the business and servicing the needs of our affiliate shipping line MSC, its 2M partner Maersk and our new venture partner HMM.”

The 2M in December signed a strategic cooperation agreement with HMM that takes effect in April when the other new shipping alliances, THE and Ocean, take effect.

“We very much look forward to using TTI’s terminal in Long Beach, and enhancing our trans-Pacific shipping operations to the benefit of our customers,” said Kim Choonghyun, chief financial officer of HMM.