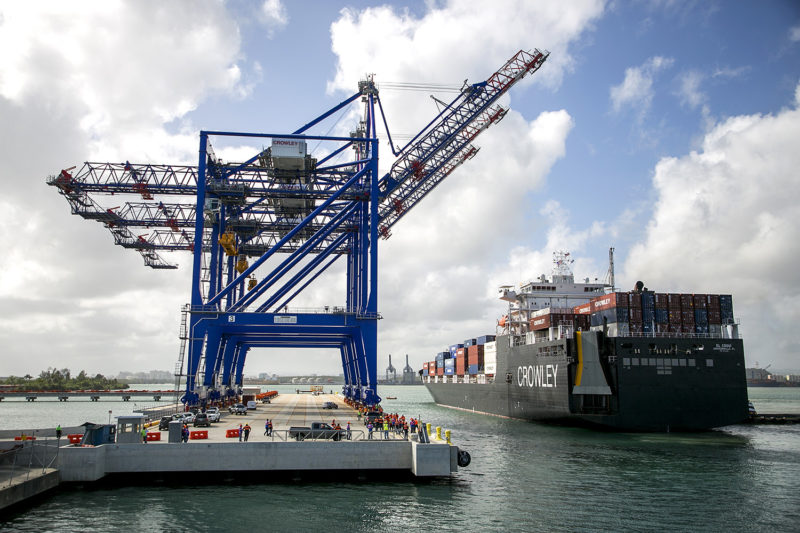 Crowley wanted to avoid the traps that come with customizing terminal operating software, so it adjusted its operations to fit Tideworks.

A change in the terminal operating system (TOS) used by Crowley Maritime Corp. has sped up truck turn times and allowed for better use of limited yard space within its three hubs in Florida and Puerto Rico. The shift is part of a decade-long operational change that’s paying dividends for the liner carrier and supply chain services provider.

The 10-year lag between Jacksonville-based Crowley making a shift in its physical operations model and the systems to support that shift underscores the need for third-party software to connect disparate supply chain activities and the role that terminal operators can play in aiding shippers, company executives told JOC.com.

“Our whole system was set up for a ro-ro model,” said Patrick Collins, Crowley’s vice president of terminal operations, told JOC.com. “Even though our vessels went to lo-lo, our terminals remained wheeled. We needed to move to a grounded terminal operation. And in order to go grounded, we needed a different system.”

Crowley had, until 2015, been using a homegrown TOS designed in the early 1980s that integrated with its homegrown container booking system. “It was perfect for our operation, but we had outgrown it,” Collins said.

That year, the company looked for an off-the-shelf solution instead of building something in-house again, and went with a TOS from Tideworks. The decision to go with off-the-shelf software at its hub terminals in Port Everglades, Jacksonville, and San Juan, Puerto Rico, was driven in part by wanting a new perspective on its operations, but also to get more ongoing value from its investment in technology, Collins said.

Avoiding too much customization

“One of our guiding principles through this process was that we didn’t want to ‘Crowley-ize’ the Tideworks implementation,” Collins said. “We didn’t want the Tideworks system to conform to all the Crowley characteristics. We learned lessons in other parts of the business, where we customized software so much we couldn’t take advantage of the newest version of the product. We wanted to use it as it was built and be able to take advantage of upgrades.”

That willingness to adapt to the benefits of the system in which they were investing was key, because manual, hard-to-scale processes had begun to develop around Crowley’s previous TOS, said Mike Porkert, Crowley’s director of terminal systems.

“Many of the processes and operations at any of our three Crowley terminals were maintained informally through post-it notes, tradition, or just sticking with what worked before,” he said. “Tideworks’ technology helped create structure and organization to our processes. Usually there’s a lot of apprehension from the business unit about a new system and it’s easy to want to customize things, but we really wanted to adopt the system.”

Crowley first implemented the TOS at Port Everglades in 2016, then expanded it to Jacksonville and San Juan in 2017.

Use of the standardized lo-lo-oriented TOS has resulted in an increase in gate volume and turn time reduction at all three facilities, Collins said. In Jacksonville, average turn time in the terminal has been cut by 37 percent, about 14 minutes, since Tideworks was implemented. In San Juan, in-gate times fell from an average of 45 minutes to 12 minutes. Time spent at gate kiosks at the Isla Grande terminal in San Juan went from an average of seven minutes to less than one minute.

Crowley was also able to reduce its leased footprint at its Port Everglades terminal by approximately 20 acres owing to its ability to move to grounded operations.

“Densification has been a key benefit,” Collins said. “Overall, we’ve decreased our footprint from 25 to 33 percent across those facilities. That’s while we took on another service through an acquisition, with more room to grow. Matching operations with lo-lo vessels means we can create stacks with gantry cranes and bomb carts instead of loading directly onto chassis. Less handling means better productivity under the cranes and better turn times for truckers.”

Collins also noted that the Tideworks system creates a safer work environment for employees in the terminals. “At the gate, where we had 12 people in the lanes working with truckers, all of that went away, to personless gates,” he said. “It's done via kiosks, with the employees working inside an office setting.”

Both Collins and Porkert said using a TOS that aligns operationally with Crowley’s lo-lo vessels feeds into the company’s broader ambitions. Crowley is unusual as a terminal operator in that the vast majority of the volume moving through its facilities is its own cargo. The company offers customs brokerage, inland transportation, ocean transportation, vessels, containers, and equipment, and 80 percent of Crowley’s ocean volume moves inland via its internal trucking transportation group.

Using the Tideworks TOS has created a shift in mentality at Crowley on the importance of data at the terminal level, because downstream, outside-the-terminal processes rely on the quality of that data.

“Beforehand, if there was a data quality issue, the idea was ‘it’s okay, just make a phone call to correct it,’” Porkert said. “This has created a shift in thinking, because if you put bad data in the TOS, it affects outgate and cargo availability. There was resistance off the bat, but within a few days, you couldn’t pry the computer out of their hand, as opposed to the paper and clipboard they used to use.”

Thomas Rucker, president at Tideworks, said TOSs are increasingly becoming the data platforms for terminals to serve as the backbone of supply chain management.

“I was previously a terminal operator myself,” he said, pointing to multiple stints with SSA Marine. “I think of it as access to data in the right format for stevedores to enable yard strategies, gate operations strategies, vessel strategies. I think back to my times in operations and what I want as I deploy equipment. Historically, I think of how much equipment costs — do I need three or can I stress two of them? You need multiple data sources to get that picture.”

Collins said the Tideworks system has been “the most successful rollout we’ve done”.

“We spent a lot of time and money early on investing to make sure the end-users drove how it operated and to make sure we changed our processes to leverage the system as best as we can,” he said.