US ports in no rush to follow Shanghai on automation path

US ports in no rush to follow Shanghai on automation path 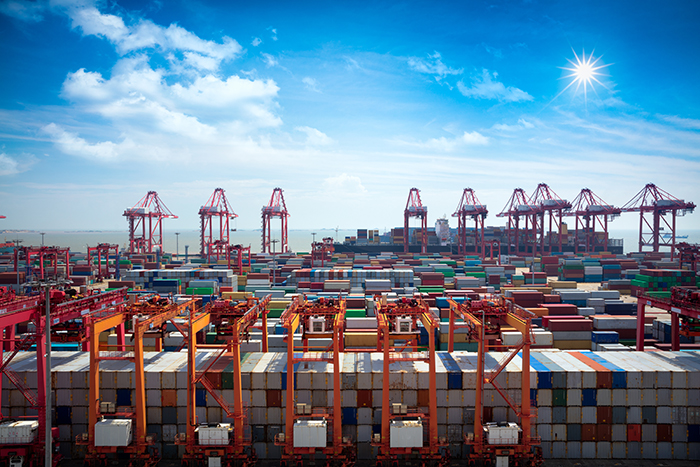 The port of Shanghai was the world's busiest in 2016, with 37 million TEU. Photo credit: Shutterstock.

The Shanghai International Port Group is taking the costly option of building an automated terminal to handle its growing container volumes or risk losing business to competing ports. But do not expect the automation wave to engulf US marine terminals outside of the major load center ports anytime soon.

Choosing this option, which invites pushback from longshore unions and can raise red flags among beneficial cargo owners about labor unrest, is being driven by a single fact, that the only way to handle today’s huge ships and container exchanges on limited land is to automate marine terminals. Shanghai, the world’s largest port, began test operations Sunday on what it bills as the largest automated container terminal. The Shanghai International Port Group opened what will grow into a $15 billion seven-berth automated container terminal that will start with the capacity to handle 4 million TEU a year, growing eventually to handle 6.3 million TEU.

Shanghai is following the lead of European ports such as Rotterdam and Hamburg, and US ports in Virginia and Southern California, in automating the handling of containers from the vessel to the container yard and onto the road trucks taking delivery of the containers. At its core, marine terminal automation is designed to deliver ultra-consistent cargo-handling activity at significantly lower labor costs and reduced emissions compared with traditional manually operated terminals.

The labor savings, which can be substantial, are a key goal of automation in the United States and in Europe, where labor costs are much higher than in Asia. Until now, marine engineers and terminal planners have described the operating technique at low-cost Asian ports as one of attacking the vessel with “brute force.” Phase IV of the Shanghai Yangshan Deep Water Port is therefore somewhat of an anomaly because labor costs in Asia are not considered to be an important consideration. Rather, Shanghai, which handled 37 million TEU last year, faces the need to handle rapidly growing cargo volumes on a limited footprint.

The use of automated guided vehicles to move containers from the vessel to the container stacks, and the use of rail-mounted automated stacking cranes (which replace diesel-powered rubber-tire gantry cranes) enables the terminal operator to stack containers higher in the yard, and to efficiently retrieve the boxes from the stacks and deliver them to truckers. Manually handling 4 million TEU per year at a single marine terminal would be problematic.

However, there is a trade-off in gaining the efficiencies of automation in that the upfront cost is quite high. OOCL’s Middle Harbor terminal in Long Beach, which is operating phase one and will finish the automation project in two years, is investing about $1.5 billion in the project. Upon completion, Middle Harbor will have an annual capacity of 3 million TEU, twice what could be handled in a manual operation on the same footprint. In order to recoup its investment, Middle Harbor’s lease is 40 years, almost twice the normal lease period in Los Angeles-Long Beach. That single facility will have a capacity of about 40 percent of the more than 6 million TEU the entire Port of Long Beach handles each year.

The Shanghai International Port Group describes the automated facility as “smart, green, high-tech, and efficient.” Ports around the world are facing pressure from governments and citizens groups to reduce harmful diesel emissions. Since many of the operations are electrified, the automated marine terminal comes as close to a zero-emission operation as is possible with today’s technology.

Push-back from labor is a given, especially at US ports. A fully automated marine terminal can reduce headcount 45 percent or more. In order to avoid going to war with the powerful International Longshoremen’s Association (ILA) on the East Coast, terminal operators such as the Virginia Ports Authority and GCT New Jersey developed semi-automated terminals. Indeed, the ILA and East Coast employers broke off talks last week on a contract extension, with automation being a key reason the the union walking out.

The Middle Harbor and TraPac terminals in Southern California are fully automated. The terminal operators met with the International Longshore and Warehouse Union (ILWU) locals to win acceptance of fully automated facilities. The West Coast longshore contract calls for consultation between the ILWU locals and management, but the union cannot veto the decision of the terminal operator, so the two sides worked out mutually agreeable solutions to get union buy-in.

Longshore unions say, and rightfully so, that a manually operated terminal will achieve higher per-unit productivity than an automated facility. For example, a manual operation can process 30 containers per crane per hour, but an automated operation may only do 26 moves per hour. Marine engineers, however, note that on a 24-hour basis, automated terminals are brutally efficient, processing 26 moves per hour round the clock, with virtually no need for labor in the nighttime hours. Felix Kasiske, partner in Hamburg Port Consulting, told the JOC’s Port Performance conference in Newark, New Jersey, in December 2016 that automated terminals deliver consistent and efficient operations “like a machine.”

Automated terminals are also much safer than manual operations because the perpendicular configuration of the container stacks keeps the street trucks on the landside of the stacks and the vessel traffic on the waterside of the stacks. When street trucks penetrate deeply into a terminal to take delivery of containers, and mix with yard vehicles and container-handling equipment, which also have human drivers, dangerous accidents are possible.

Permalink Submitted by ferrullig@minds... on Dec 11, 2017 6:46PM EST
Automated terminals at major ports is a must to keep abreast of the growing global trade and all that entails, including the eventual appearance of the mega vessels. The issue in the US is that labor doesn't want it, fear of loss of more jobs than hit with the evolution of containerization. There are ways to deal with that including training programs for some of the automated processes and systems. It is a costly initiative and if labor doesn't accept it, or worse, does and then continues to produce as they do today, then a huge waste of money. There has to be a happy medium where the US can get into the 21st Century at their ports and terminals, and a national direction on which ports need which new pieces of technology and equipment, not every port does. It should not be left to cities and states to decide, it needs a national interest, analysis and solutions.
Port News›Terminal Operators›Shanghai International Port Group
Port News›Asian Ports
Port News›Asian Ports›Port of Shanghai
Technology
Technology›Supply Chain Automation
Asia›China