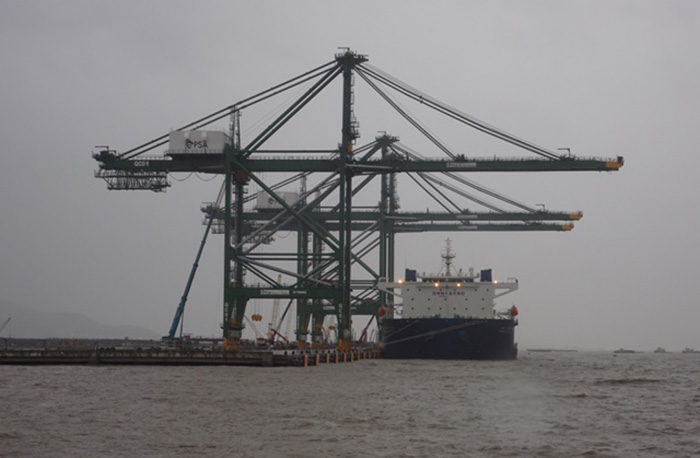 Nine more cranes will eventually join those that arrived at PSA's JNPT operation on Friday.

The cranes for Bharat Mumbai Container Terminals (BMCT), which is slated to open at the end of the year, have a lifting capacity of 66 tons and outreach of 63 meters (207 feet), capable of servicing large vessels of up to 22 containers wide, PSA Bharat Mumbai said in a press announcement.

They are the first batch of marine equipment the company ordered from Doosan Heavy Industries, Vietnam, which will deliver three more cranes in September and another six units during 2018 to 2019 in line with the staged development of the new terminal.

“BMCT will be a game changer for India’s port and logistics market given its unprecedented size, scale and dedicated infrastructural links; and in particular its capabilities in handling trains from the Dedicated Freight Corridor,” BMCT CEO Suresh Amirapu said in a statement.

Although the 30-year concession contract was awarded to PSA International in May 2014, with public-private investments amounting to Rs. 7,915 crore (approximately $1.2 billion) in two phases, construction on the project started in October 2015.

The Singapore-based company said it is already in the process of hiring waterfront workers from the local community for employment at the terminal as part of a previous government commitment to rehabilitate farmers who had surrendered land for the port development. “BMCT will continue to give priority to suitably qualified JNPT project-affected persons.”

Unionized dockworkers and political groups have in the past staged strikes and blockades of JNPT over compensation to those aggrieved people.

In addition to the PSA terminal, JNPT is positioning itself to handle higher volumes from general trade growth and a new special economic zone via a string of rail-road connectivity infrastructure projects with state investments worth Rs. 1,117.03 crore that include a common rail yard for all terminals, a rail link to the PSA terminal, a third rail corridor between JNPT and the Jasai rail station, refurbishment of connecting highways, centralized parking lots for trucks, a coastal cargo berth, and backup yard improvements.

At the same time, a doubling of capacity and aggressive shipper outreach efforts by private rival Mundra port could place heavy pressure on JNPT’s growth in the coming years.

How to Improve OTIF: 15 Tips for On Time and In Full Delivery
END_OF_DOCUMENT_TOKEN_TO_BE_REPLACED