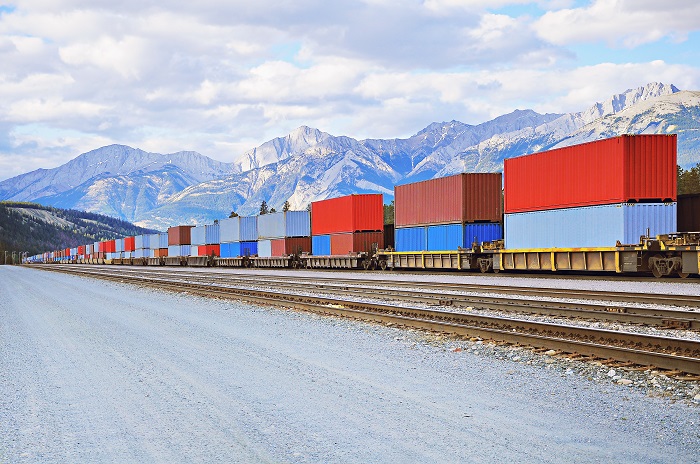 Western Canada has been “behind the curve” in developing inland ports compared with the US West Coast and South Atlantic regions. However, that will change with Ashcroft's expansion. (Above: a freight train travels in Canada.) Photo credit: Shutterstock.com.

Resource-rich Western Canada is extending its international reach with a planned $28.2 million expansion of the Ashcroft Terminal inland port about 211 miles east of Vancouver. Global terminal operator PSA International of Singapore, which has taken a 60 percent stake in Ashcroft, will link the transloading operations with potential markets in Asia and beyond.

“With 74 million TEU in 40 ports, PSA will give us the global reach,” said Kleo Landucci, chief commercial officer at Ashcroft. PSA has operations in 16 countries in Asia, Europe, and the Americas, but none in Western Canada.

Inland ports that loading bulk products into marine containers for intermodal transport to seaports provide multiple benefits for exporters. The inland location features lower land and labor costs for transloading operations. Transferring the bulk products to rail for the final leg of the journey to the seaport removes hundreds of trucks from clogged roadways in port cities, reducing traffic congestion as well as harmful diesel emissions.

Western Canada has been “behind the curve” in developing inland ports compared with the US West Coast and South Atlantic regions, Landucci said. Prince Rupert, 500 miles north of Vancouver, teamed up with Ray-Mont Logistics last September with the opening of an agricultural transloading facility, although that operation is adjacent to a port in a much smaller city.

Low vacancy rates and increasing rental costs for industrial property in Vancouver are forcing importers as well as exporters to locate their warehouse operations hundreds of miles from the booming port city. The 2016 Canada Transportation Act Review report identified growing congestion and rising costs in the Vancouver region as an obstacle to economic growth.

Ashcroft Terminal, located on 320 acres with direct access to the Canadian Pacific (CP) and Canadian National (CN) main lines, provides transloading for mining, oil and gas, agricultural, and forestry products, but its ability to reach global markets for these products has been limited, Landucci said. PSA Canada Holdings, a subsidiary of PSA International, in late July took a 60 percent stake in the inland terminal operator. “We had to find the right strategic partner. PSA is the largest terminal operator in the world,” Landucci said.

The Ashcroft investment also gives PSA a strategic position in Western Canada should it choose to bid on the future expansion of the Port of Vancouver at Roberts Bank Terminal 2 planned for the mid-2020s. Robin Silvester, president and CEO of the port authority, said that the growth of container shipping at Canada’s largest container port depends upon construction of Terminal 2.

In order to reach its potential as an inland port for Vancouver, Ashcroft Terminal will invest $28.2 million — with $9.2 million of the money coming from federal funding under Canada’s National Trade Corridors Fund — to expand the terminal, add a rail link to the CN mainline, expand the internal road network, and construct a large storage warehouse. The projects are scheduled for completion in the summer of 2021.

Landucci said commodities will arrive at Ashcroft via bulk rail or truck. The products will be transloaded into marine containers for the 211-mile journey to the Port of Vancouver. “From the hinterland to the port, this will give us more control over supply chain costs,” she said.

Initially, the resources to be transloaded are expected to be sourced in Canada, although the CN and the CP networks extend to Chicago and locations to the east and south either directly or through interlining with eastern railroads. Either way, Ashcroft will provide greater export opportunities for Vancouver and two-way hauls for the railroads. Vancouver in 2017 ranked 47th among global ports with 3.25 million TEU, an increase of 10.9 percent over 2016, according to IHS Markit ports and terminals, Alphaliner.