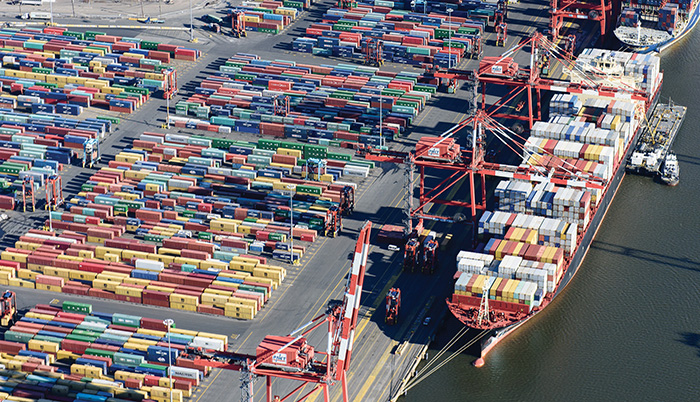 The upgrade includes the installation of two new super post-Panamax cranes, adding to three that arrived in 2014, and eventually the construction of a new administration building.

NEWARK, N.J. — A major upgrade that will double the capacity at one of the four main terminals at the Port of New York and New Jersey is unfolding as the port nears the end of a project to raise the Bayonne Bridge, enabling big ships for the first time to dock at the terminal.

The installation of a new computer “brain” at Port Newark Container Terminal three weeks ago that coordinates the operation of the entire terminal is part of a plan that is expected to eventually cost more than $500 million and includes land acquisition, a new gate, a dredging project, new cranes, and an additional berth. The upgrade will eventually increase the terminal’s capacity from about 1 million containers a year to 2.4 million containers per year by 2020. In 2014, the terminal handled 840,000 containers.

The development is the most vigorous at any of the six terminals at the East Coast’s largest port, as it readies for the conclusion of a project that will raise the Bayonne Bridge’s vertical clearance from 151 feet to 215 feet.

The project will enable larger ships to pass below and get to Port Newark Container Terminal, APM Terminals, and Maher Terminals. At present, most ships larger than 10,000 twenty-foot-equivalent units, and many smaller vessels, can get to only one of the port’s four main terminals, Global Container Terminal in Bayonne.

The bridge elevation is expected to usher in a new era of increased cargo volume and larger ships at the port, which has suffered sporadic truck congestion. GCT in December introduced an appointment system to help smooth the flow of trucks and containers, which, if successful, will likely be implemented at PNTC.

The port is also working on creating a universal chassis pool, one of several recommendations from a port performance task force created to help improve container flow and address other issues.

Terminals at the port have together spent $2 billion in private investment to upgrade the terminals in the last 10 years, and expect to spend another $1 billion in the next decade, said Bethann Rooney, assistant port director at the Port Authority of New York and New Jersey. Port Newark Container Terminal has the most work underway at present, she said.

PNCT has spent $200 million so far, and could eventually spend between $500 million and $600 million, said Jim Pelliccio, PNCT president and CEO. He said the upgrade work is effectively creating a new, modern terminal within the existing one — without shutting the facility down to do the work.

“We are basically adding a new terminal in the Port of New York,” Pelliccio said.

The upgrade also includes the March opening of 27 new acres of container storage, and the acquisition, expected in May, of 17 more acres of storage that will open next year. The terminal expects to open a new gate in the fourth quarter that will enable trucks to stop only once on entering the terminal, instead of three times at present.

A dredging operation to start in 2018 will deepen an existing berth from 42 to 50 feet, and another from 34 to 50 feet, creating a new berth to add to the three used at present.

Pelliccio said the introduction of the new Navis N4 computer, the “brain” which coordinates the terminal’s operation, on Jan. 14, had gone off without problems.

“We turned off the old one, and turned on the new one,” he said. “At this point in the process, it is working very well.”

Glitches in the introduction of a similar computer system at the port’s Maher Terminals in 2013, for example, caused days of truck lines and forced the terminal to subcontract several ship calls to other port terminals.

PNCT at the end of January suffered truck congestion that was intense enough that the Port Authority of New York and New Jersey’s police department issued warnings several days running of “heavy gate volumes” at the terminal, and limited the traffic going there.

Terminal officials said that the congestion was due to a heavy storm that pushed vessels off schedule and caused “bunching,” forcing the terminal to handle 5,000 containers from three vessels at one time — a record volume for the terminal, officials said.

The port authority issued similar warnings on Monday and Tuesday of this week, which Pelliccio said was the result of the earlier bunching.

“Our gates are running very smoothly,” Pelliccio said in an email. “The queue has been affected by early queuing of trucks pre 0500 [5:00 a.m.]. We are clearing through it in most cases by late morning, early afternoon.”

Upon completion, the expansion will increase PNCT’s footprint to 300 acres, up from 188 acres in 2010 and 269 acres in 2015, terminal officials said. The upgrade includes the installation of two new super post-Panamax cranes, adding to three that arrived in 2014, and eventually the construction of a new administration building.

The terminal about five years ago completed a flyover linking the terminal with its rail connection, passing over a main arterial road through the port and enabling trucks to get to the intermodal terminal in a six-minute drive, instead of the previous 40 minutes. In 2012, the terminal received the first four-container-high straddle carrier, and now has 36, and is the only port in the nation to use them, officials said.

“I believe we are in a much better position, and our footprint has improved,” said Pelliccio. “Our investors recognize the value of the strategic position of the New York gateway and the discretionary market, and have acted accordingly.”