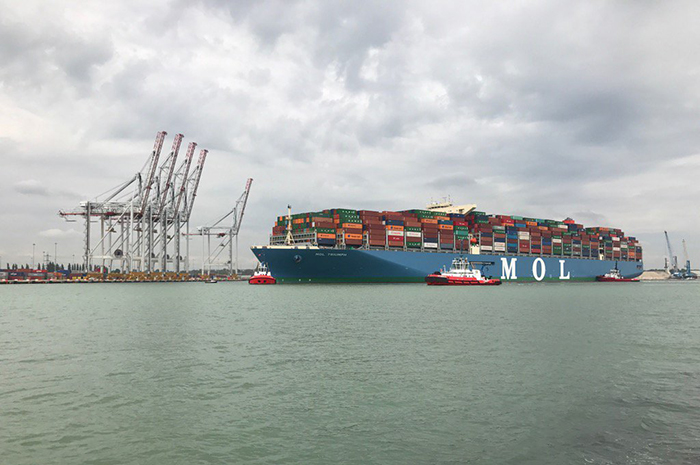 The 20,170 TEU MOL Triumph, seen at Southampton, is the largest container ship to ever call the United Kingdom. Such records are broken regularly around the world.

The forecast 4 percent growth in global container terminal throughput in 2017 is expected to hold into 2018 on the back of a strengthening global economic outlook led by the United States and emerging markets, according to shipping consultants Drewry, but ports and terminal operators expect less shipping lines and greater infrastructure demands will be a drag on profits.

Throughput at a sample of global ports selected by the London-based company grew by 3.6 percent year over year in the first quarter, a significant pick up from the 2.1 percent achieved in the final quarter of 2016.

“We have recently revised upwards our 2017 forecast for global container port throughput to around 4 percent, and 2018 is expected to be at a similar level,” said the company’s senior analyst for ports and terminals, Neil Davidson.

On a regional basis, ports in Africa and Latin America showed the strongest growth over the course of the first quarter. In Africa, throughput at ports handling more than 125,000 TEU annually rose by around 13 percent year over year, and throughput at a sample of similar-sized ports in Latin America rose by close to 10 percent.

The good numbers for Africa indicate volumes may finally be starting to come back following a lengthy decline mainly due to the low price of oil, which pulled down throughput at the major oil exporting economies of West Africa.

Despite the strong showing at the beginning of the year, throughput at African ports is still down by 13 percent since 2014.

“Volumes are slowly recovering and in the medium- to long-term; it is reasonable to expect good growth in the region,” said Davidson.

The outlook for business on the continent is further boosted by the increasing size of vessels deployed, which is expected to drive more hubbing in West Africa. Throughput at North American terminals also expanded above the global average of 3.6 percent in the first quarter, and the improving volumes are expected to continue with stronger economic data from the region.

IHS Markit expects US real GDP to jump from a 0.7 percent annual rate in the first quarter to 3.4 percent in the second as consumer spending is supported by rising employment, real incomes, and household wealth.

JOC.com senior economist Mario Moreno has forecast Asia to US TEU trade will rise by 6.9 percent this year.

Oceania and China port volumes also grew above the global average in the first quarter, but growth was more moderate in traditionally high-growth regions such as Southeast Asia, the Middle East, and South Asia.

Despite relatively good demand across most major regions, terminal operators say they expect pressure on margins due to the twin impacts of industry consolidation and ever-increasing vessel sizes to continue.

IHS Markit data show that with outstanding liner merger and acquisition (M&A) deals included, seven carriers will shortly control 70 percent of global fleet capacity, which currently sits at around 20.2 million TEU. At the same time, three resized alliances now account for 75 percent of the capacity of the fleet, the data show.

The more concentrated customer environment means some loss of negotiating power for terminals, and the so-called “tariff effect” from customer M&A — where merged lines are in a position to choose the lowest cost supplier contract — is also impacting revenue.

IHS Markit data show over 80 percent of the current orderbook consists of tonnage in excess of 10,000 TEU. The ongoing influx of larger vessels to the market continues to put pressure on port infrastructure, requiring investment in upgrades and new equipment.

According to Davidson, in locations such as the US East Coast, there is significant activity due to increased vessel sizes and although much of the infrastructure and equipment upgrades are complete, there is still work to be done.

“13,000-TEU neo-Panamax vessels are already calling and ship sizes will increase, service frequency will drop, and peaks will get worse …"

“By and large the US East Coast ports have done the physical investments and so now is the time to look at the soft side — sharing information, data, and coordinating operations, investments.”

Increased state input into port and terminal development is also adding considerable complexity to the global ports market at the moment.

Unprecedented in terms of its ambition and method, China’s Belt and Road program is generating a lot of new activity in the sector as well as a significant level of unpredictability.

In the case of some Belt and Road port projects with a strong geopolitical slant, the focus on ports and related infrastructure is secondary, which has implications for the capacity balance in some regions, such as the strategic Strait of Malacca.

Higher-level drivers behind Belt and Road port projects can also push up the price of asset acquisition when immediate financial returns are not prioritized.