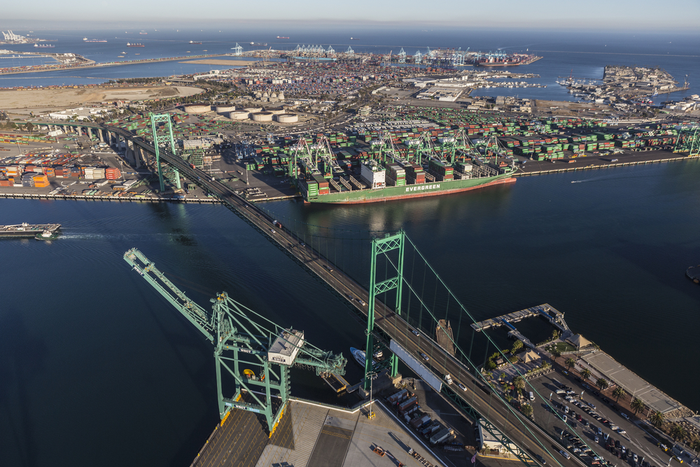 The traffic mitigation fee effective Aug. 1 will be $33.47 per TEU and $66.94 per FEU on both day and night shifts in LA-LB. Photo credit: Shutterstock.com.

In addition to the 8 a.m. to 5 p.m. weekday gates that most US ports offer, the 12 container terminals in Southern California normally operate four weeknight gates and one weekend day gate. When it was instituted in 2005, the TMF was charged only on container moves made during the peak daytime hours when traffic on local streets and freeways was the heaviest.

Originally, truck moves in the off-peak hours did not pay the fee, but that changed in late 2018.

By discouraging daytime traffic, the TMF created operational problems, including truck “bunching” in the late afternoon as truckers queued up outside the gates, waiting for the fee to end with the beginning of the night shift.

PierPass Inc., which manages the extended gates program for WCMTOA members, in late 2018 switched to a flat fee charged on all non-exempt truck moves, both day and night. John Cushing, PierPass president, told JOC.com last December that as a result of the new flat fee, truck bunching at terminal gates was eliminated, truck turn times improved, and the approximately 50-50 split between peak and off-peak hours remained.

Truck turn times in Los Angeles-Long Beach have steadily improved over the past two years due to an outreach program by the Harbor Trucking Association (HTA) with terminal operators and, more recently, declining cargo volumes during the coronavirus disease 2019 (COVID-19). The average truck visit time in May was 59 minutes. That compares with turn average times of 90 minutes or longer in early 2019, according to the HTA.

When the PierPass extended gates program was established in 2005, Los Angeles-Long Beach was the only North American port complex with a standardized program of night and weekend gates. In addition to extending gate hours to accommodate growing cargo volumes, the off-peak program was developed in response to community pushback over port-generated traffic congestion and pollution.

As other gateways in recent years encountered congestion and pollution problems, ports or their terminal operators in New York and New Jersey, Oakland, Montreal, and Vancouver, Canada, developed fee-based programs for extended gates.