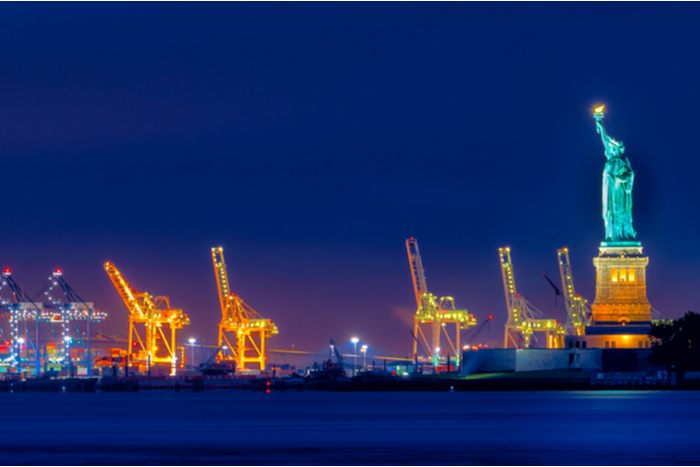 A US District Court in New York on Monday denied a request from GCT for a preliminary injunction to prevent Maersk from canceling its lease early. Photo credit: Shutterstock.com.

A US District Court judge has paved the way for Maersk to shift three South American services to a terminal operator affiliate in the Port of New York and New Jersey next month after rejecting an attempt by the operator of a Staten Island marine terminal to block the carrier from preemptively canceling its lease.

The US District Court for the Southern District of New York on Friday denied a request by Global Container Terminals (GCT) for a preliminary injunction to prevent Maersk from canceling its lease 20 months before it expires. Maersk’s decision to move the services to its sister company APM Terminals in Port Elizabeth, New Jersey, illustrates how general-use marine terminals are susceptible to carrier cost-cutting as liner companies accelerate blank sailings to cope with plunging container volumes due to the coronavirus disease 2019 (COVID-19).

GCT issued a statement on Tuesday saying it will continue legal proceedings against Maersk “in order to protect our business and the integrity of the contractual commitments by our customers”. GCT filed for the preliminary injunction on April 20.

In a statement on Tuesday, Maersk said it is leaving GCT “to achieve better operational efficiency in APM Terminals Elizabeth after its recent $200 million upgrade and expansion”. Maersk and APM Terminals are owned by A.P. Møller-Maersk, and while independent businesses, they have been working more closely together through the company’s integrator strategy.

Maersk earlier this month offered GCT a monetary settlement to compensate for its early cancelation of the lease, but GCT turned it down. “It is regrettable that GCT has violated its confidentiality obligations by making settlement discussions publicly available,” Maersk said in a statement last week.

GCT fired back on Tuesday. “It is important to clarify that GCT, in order to preserve the status quo, sought an extraordinary remedy from the court in the form of a preliminary injunction on an expedited basis,” it said. “This relief was sought to avoid disruptions to labor, operations, and other consequences from the breach at GCT NY.”

New York-New Jersey is a landlord port. The terminal operators lease facilities from the port authority, and in turn sign contracts with shipping lines for guaranteed space for their liner services. GCT is a general-user terminal and not affiliated with a shipping line.

In addition to the Staten Island Terminal, GCT operates a larger terminal in Bayonne, New Jersey. Maersk’s South American services were an important source of revenue for GCT Staten Island.

Terminal operators throughout North America, as well as operating ports, have been hit with dozens of blank sailings dating from the Lunar New Year celebrations in Asia, which began in late January. According to Global Port Tracker, which is published by the National Retail Federation and Hackett Associates, the double-digit deterioration of trade volumes due to COVID-19 in China and the United States has shown no letup and is projected to continue into the summer months.

According to Sea-Intelligence Maritime Consulting, collectively, the ports will take a hit of millions of dollars in lost revenue for blank sailings that have been announced into mid-June. Sea-Intel said additional blank sailings are possible if container volumes continue to decline, which is likely.