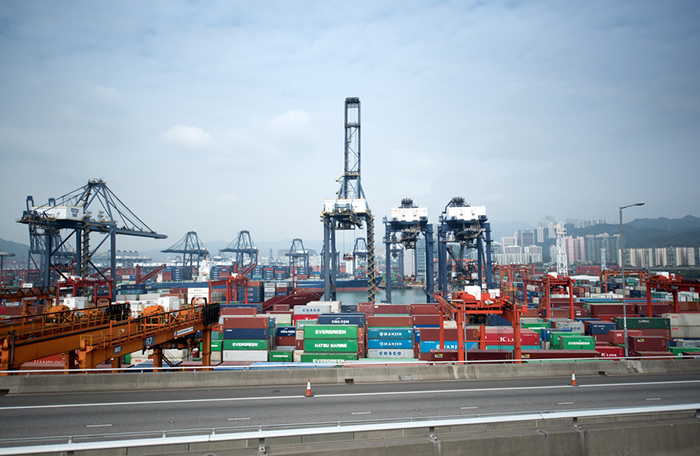 Traffic at Hong Kong International Terminals, pictured, along with the rest of Hutchison Port Holdings Trust's Hong Kong terminals, has fallen year-to-date on a year-over-year basis.

Weaker transshipment and intra-Asia cargo dragged down throughput and revenue at Hutchison Port Holdings Trust in the first nine months of 2016.

A 7 percent drop in throughput at the company’s deep-sea terminals in South China and Hong Kong was matched by a similar drop in revenue despite a third-quarter rebound in US trade.

Excluding a rent and rates refund at its flagship terminal operation in Hong Kong, and taking into account additional depreciation as a result of a change in a 2015 accounting estimate, year-over-year net profit was down by 12 percent and net profit attributable to shareholders was down 17 percent.

Of the HPH Trust terminals where throughput declined, the three terminals in Hong Kong — HIT, COSCO-HIT, and ACT — fared worst, with volumes down 11 percent during the period. YICT in Shenzhen saw throughput fall 4 percent.

“The service rationalization of various global shipping alliances has negatively impacted the transshipment volume of both HIT and YICT over the past few quarters,” the company said in the results announcement.

Outbound cargoes to the United States showed some rebound in the third quarter after a weak second quarter, but third-quarter outbound volumes to Europe slowed.

“Weak consumer sentiment, (the) high unemployment rate and the knock-on effects from Brexit continue to affect (Europe’s) economic recovery and the pickup of the European trade,” the company said.

Management said it remained cautious owing to the soft trade outlook and would continue to focus on cost reduction and that it will “respond promptly and effectively to any challenges, given its strong fundamentals.”