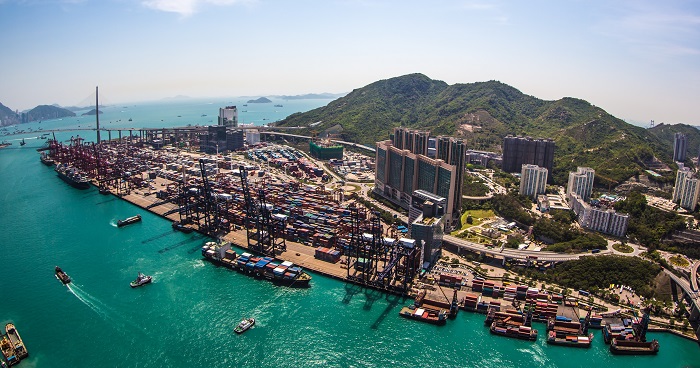 Yard productivity at one of Hong Kong’s main container terminals could increase by as much as 40 percent with the introduction of a pioneering, remote-controlled yard crane and automated stacking system.

Efficiency gains from the system implemented by Hong Kong International Terminals (HIT) at CT9 North will be felt by liner customers and improve the capability of the terminal to handle large cargo surges from bigger ocean-going vessels, HIT's head of engineering Simon Wong, told JOC.com.

“Bigger ships do not always mean bigger call sizes but when it does you can have situations when you are taking 5,000 boxes off a vessel and putting 3,000 on. That can mean 200 moves per hour coming into the yard, which puts a lot of stress on the terminal,” Wong said.

Using Japanese-developed technologies, the system is modelled on a version installed at the Tobishima Pier South Side Container Terminal in Nagoya, the first terminal in world to use automated rubber-tired gantry cranes (RTGs).

Cranes are installed with monitoring cameras and sensors to support remote operations and the system is integrated with a database at the terminal to work out where and how containers can best be grounded and stacked.

HIT expects to recoup the cost of about HK$4.5 million ($575,284) for each of the 29 RTGs involved through higher operational efficiency and productivity, increased safety, as well as labor benefits, including a major improvement in the working environment for crane operators.

The average productivity gain of the automated system is calculated at 20 percent more than the manual equivalent, but Wong said gains could turn out to be much more than that.

“If we are really serious about it, we can realize a 30 percent to 40 percent improvement in productivity,” Wong said.

HIT began working on the system in phases after a 40-day dock strike in 2013 crippled operations and resulted in a backlog of tens of thousands of containers, undermining the competitiveness of one of the world’s largest container ports.

Today, the port of Hong Kong suffers from a shortage of labor, with local workers shunning frontline jobs seen to be tough, repetitive, highly manual, and involving shift work.

A frontline worker at the port of Hong Kong currently earns about HK$300,000 per year. In a manual yard crane system, roughly four workers are needed to operate one crane in a 24-hour period.

The new system will eventually require just one worker for four cranes and allows operations to load and unload containers from trucks to take place entirely from an office setting.

The system was installed in phases over four years and was the first time in the world a container terminal transitioned to a remote-controlled and automated stacking system while maintaining full operations. According to Wong, major challenges included making sure the ground was sufficiently level and developing an outdoor communications system with the capacity to handle data loads with a high transfer rate.

HIT plans to start replicating the system at another of its terminals in Hong Kong from next year and will also implement the system in phases at the HPH Trust-operated Yantian terminals in Shenzhen.