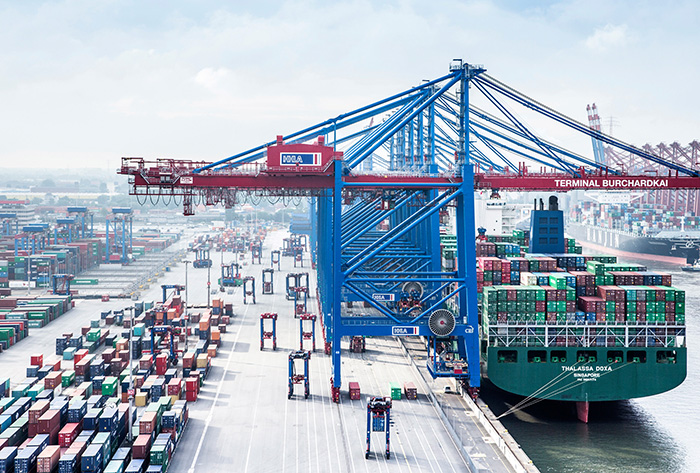 The port of Hamburg is Europe's third-largest container port and handled 8.9 million TEU in 2016.

Hamburger Hafen und Logistik AG (HHLA) posted significantly higher earnings and revenue in the first half of the year as Hamburg’s leading container terminal operator benefited from the launch of the new ocean carrier alliances.

The ports division accounted for 90.6 million euros of the profit, an increase of just over 54 percent from the first half of 2016.

“Following the reorganization of the alliances of the shipping companies, HHLA managed to maintain its strong position in contested market environments,” said Angela Titzrath, chairwoman of HHLA’s executive board.

The three Hamburg terminals posted an 11.8 percent increase in traffic to 3.4 million TEU, driven mainly by a 16.1 percent jump in Asian shipments and a 22.4 percent surge in feeder traffic with Baltic Sea ports.

HHLA probably also benefited from Russia’s continuing recovery from recession, as it was negatively impacted by the effects of lower oil prices and Western sanctions on trade with the country. Russian container volume increased 15.3 percent year over year to 2.3 million TEU in the first half, according to statistics from the country’s Ministry of Transport.

The container division’s financial performance outpaced the traffic growth, with earnings before interest and tax (EBIT) soaring almost 26 percent to 68.1 million euros on a 10.6 percent rise in revenue to 336.6 million euros.

Rail traffic to and from HHLA hinterland markets grew 5.9 percent to more than 568,000 TEU, and truck transport increased 11.8 percent to 176,000 TEU due to strong demand in the Hamburg area.