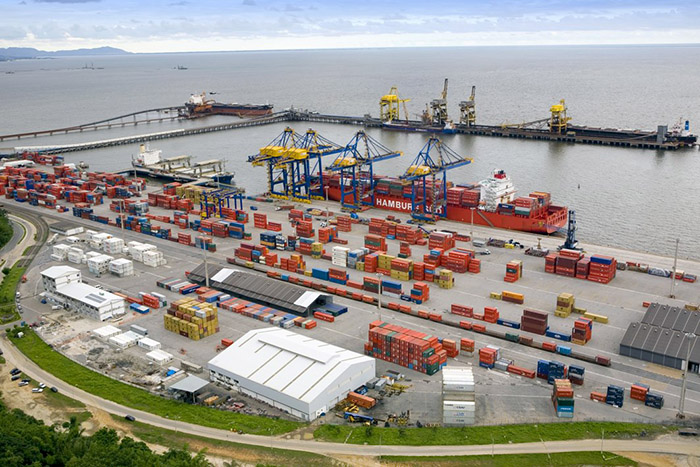 Global terminal operators are eying three private container facilities — even as the Brazilian government trudges through a $2.6 billion plan to sell off existing and new port concessions.

The largest and most prestigious of the three terminals being eyed by global operators is Sepetiba Tecon. The terminal, roughly 49 miles from Rio de Janeiro, is on the block for about $266 million, according to sources close to the holding company Companhia Siderurgica Nacional, Brazil’s national steel company. CSN wants to raise cash as it struggles to compete with cheap steel from China that has put the company under “serious financial pressures,” according to one source.

Sepetiba Tecon has an annual capacity of 400,000 TEUs, but only handled 110,000 TEUs during the first half of this year, according to the facility’s commercial department. But with two new services now in place, MOL's CSW service to the Far East and Hapag-Lloyd’s GS1 service to the U.S. Gulf, the terminal expects to handle more than 300,000 TEUs by the end of this year.

Ecoporto Santos, which has been struggling this year after losing services to its younger rivals, has been in talks with PSA International and Hutchison Port Holdings about “possible joint ventures” or a full-scale buyout, industry sources told JOC.com. The terminal has been unable to compete with these rivals because it must use a more expensive, unionized labor pool, allowing its competitors to charge lower handling fees. Its competitors can also rely on carrier sister companies, ensuring steady volumes. As a result, the terminal has had to lay off workers, leading to a strike.

The last terminal up for sale is  Terminal Vila Velha, in the city of Vitoria, in the state of Espirito Santo. Log-In, the Brazilian flag coastal carrier, wants to either offload its holdings in the terminal or entice more investors in to buy shares, sources told JOC.com. TVV handled 1.3 percent less TEUs in the first half on a year-over-year basis with 113,207 TEUs.

Luiz Fernando Resano, technical director for Syndarma, the association of Brazilian-flag shipowners, said there was “a lot of speculation” that Log-In was seeking more investment both for its liner division and also for TVV.

“Log-In is an open company on the Bovespa stock exchange so there is always the possibility that they can be bought,” he told JOC.com. “But there are strong rumors that they might separate the coastal services from the port operation and sell TVV separately. There are some suggestions that APM Terminals and the port operating branch of CMA CGM have had several talks with Log-In about this.”

PSA and HPH have been trying to enter the Brazilian market for several years and the following 12 months may present the best time to do so given the sales, concessions, and devaluation of the real against the dollar. Their competition will be stiff however, as APMT has declared publicly that it wants to expand further in Brazil and there are also a number of international and Brazilian infrastructure funds that have been monitoring the terminals closely.