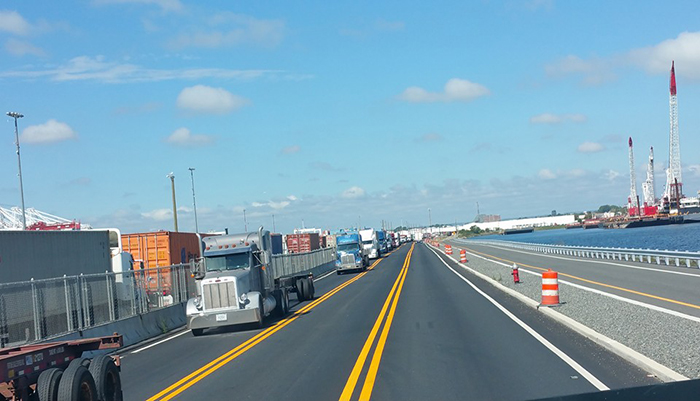 The Port of New York and New Jersey's Global Container Terminal is setting up a pilot appointment system to avoid long truck lines outside its gates like ths one pictured in early September. Credit: Port Driver.

A pilot program for the first truck appointment system in a terminal at the Port of New York and New Jersey will begin Oct. 13, enacting a much-discussed — and somewhat delayed — measure that has divided truckers and port leaders but is key to reducing sporadic congestion.

The system, at Global Container Terminal in Bayonne, will require truckers to make a reservation to deliver or pick up a container — between 6 a.m. and 8 a.m., initially — on weekdays. Trucks can arrive without an appointment for the rest of the day, but the terminal expects to gradually increase the time in which reservations are required.

The system, similar versions of which are in ports across the United States, is designed to smooth truck arrivals and avoid sudden bunches of trucks arriving all at one time, which can cause congestion and backups, and place stress on the terminal’s resources, workforce, and equipment. Global Container Terminal officials have been testing the system in recent weeks to get it as ready as possible for the start of the pilot program.

The terminal, in a message to truckers earlier in the week, said, “this new system will help reduce turn-time for motor carriers visiting the terminal and add a level of consistency to each trip.” The message included a lengthy explanation of how the system would work, and said the terminal is aiming for a turn time of 45 minutes and a “dual transaction” time of 60 minutes.

John Nardi, co-chairman of the port’s Council on Port Performance, welcomed the initiative, which his council had call for.

“The days of free flow receiving delivery of cargo are coming to an end,” he said. “We need the whole supply chain to be more coordinated.”

“The (GCT) took a very responsible path for the implementation, where they included all the interested parties, and they wanted to make sure (that) what they implemented works,” he said. “So they took their time about it.”

The system is one of three measures seen by leaders in the Port of New York and New Jersey as key to improving the flow of trucks and containers through the port and resolving the sporadic congestion and delays that have plagued the ports in recent years. The other two measures are extended terminal gate hours and a chassis pool.

The port’s Council on Port Performance in June 2014 recommended a version of the appointment system as one of 23 measures that could improve the service of the port. At the time, it was known as a truck management system, in which trucks advised terminals of their pending arrival. The task force stopped short of recommending an appointment system, which was vigorously opposed by trucking leaders because chassis shortages and delays at terminals might make it impossible for truckers to meet appointment windows.

Still, GCT said in December 2014 that it expected to have a pilot appointment system up and running in the first half of the following year, a target date that has since been revised several times.

“This is a major step forward in making the port big ship ready and a recommendation that’s finally coming to fruition after years of discussion and debate,” said Steve Coleman, a spokesman for the Port Authority of New York and New Jersey. He said an appointment system will be “critical to the port’s ability to efficiently handle new-Panamax ships now calling on the Port of New York and New Jersey.”

Jeff Bader, president of the Association of Bi-State Motor Carriers, declined to comment on the system until he had discussed it with the organization’s board next week.

GCT did not respond to a request for comment.

Support for appointment systems has been growing in various ports, as they wrestle with how to handle increased container volumes and the sudden surges in activity expected to come with the shift to larger ships, but also with few vessel visits.

On the Gulf Coast, New Orleans has one in place, and on the East Coast, Virginia tested one last year. On the West Coast, 10 of the 13 container terminals at the ports of Los Angeles and Long Beach operate appointment systems, as does the Port of Oakland, which launched one in June.

In the Port of New York and New Jersey, truckers must make a reservation through an online portal. They will book a one-hour timeslot, with a 30-minute lead time at the start and finish of the slot, effectively giving them two hours to fulfill the reservation.

If a trucker misses a previously booked reservation, “the terminal will indeed be monitoring and tracking 'MISSED' reservations and eventually enforce some rules concerning this,” the message said.

The terminal's message noted that the system was created and funded by the port’s Sustainable Terminal Services Agreement Members, which include all the terminals in the port.

“At this point, GCT Bayonne will be the first to implement but others have expressed interest in implementing the system in the near future,” the message said.