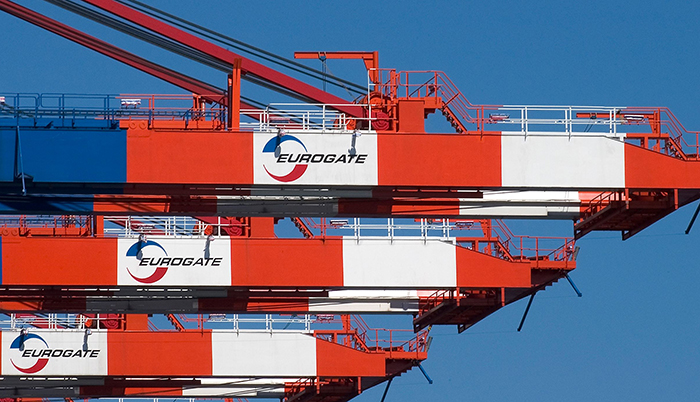 Wilhelmshaven, once derided as a white elephant, fueled the growth at Eurogate's German terminals.

The Bremen-based group’s traffic edged up just 0.4 percent to 14.6 million twenty-foot-equivalent units (TEUs) from 14.55 million TEUs in 2015 as a rebound in volume at its co-owned Italian terminals offset slight declines at its flagship German hubs resulting from negative market developments.

“2016 was a turbulent year for container shipping and one that brought a few surprises and changes,” said Michael Blach, chairman of the Eurogate board management.

“A number of shipping line mergers and the insolvency of the Korean carrier Hanjin Shipping led to realignment within the major alliances.”

Total German traffic stalled at 8.24 million TEUs as a 55,000-TEU dip in the combined volume at Bremerhaven and Hamburg to 7.75 million TEUs was offset by a 12.9 percent surge at Wilhelmshaven to just short of 482,000 TEUs.

The five Italian terminals operated by Contship Italia, in which Eurogate has a 33 percent stake, grew by 4.6 percent to 5.01 million TEUs, driven by the continuing revival at the Medcenter transhipment hub in Gioia Tauro, which boosted traffic by almost 10 percent to 2.5 million TEUs.

The shake-up in the container shipping industry has had negative and positive impacts on Eurogate’s German terminals and will continue to affect traffic through the year as the alliances battle for market share.

The Hamburg terminal was hit by Hanjin’s collapse and China Shipping Container Line’s switch to the rival HHLA terminal following its merger with Cosco in 2016. It also faces the loss United Arab Shipping Company, which is expected to move to an HHLA terminal in which Hapag-Lloyd has a stake, following its acquisition by the German carrier.

The Hamburg terminal will partially compensate for this loss when one of its leading customers, Maersk Line, closes on the acquisition of Hamburg Süd, which currently calls at an HHLA terminal.

Eurogate is also cashing in on the decision of the newly launched four-carrier Ocean Alliance to include its terminal in Wilhelmshaven, Germany’s only deep-water port, in its network.

The port, which opened in 2012 and was initially written off as a white elephant, also handles calls by the 2M Alliance members Maersk and Mediterranean Shipping Company as well as Hamburg Süd and Hyundai Merchant Marine, with which they have struck cooperation deals.

Eurogate raised fears, however, that the German terminals’ competitive position is being threatened by delays to infrastructure projects that would enable them to handle the largest vessels.

There is no definitive schedule for the extension of the outer Weser River at Bremen/Bremerhaven, and the deepening of the Elbe River, Hamburg’s link to the open sea, is not likely to be completed before 2020 at the earliest, the company said.

Other major projects, including the construction of the A20 motorway and the upgrading of the Kiel Canal, will take several more years to complete.

“All this sends out negative signals internationally and is a competitive disadvantage for Germany as a maritime location,” Blach said.

“Ultimately, it’s the shipping companies that decide which ports are attractive to them and which ports they include in their transport routes.”