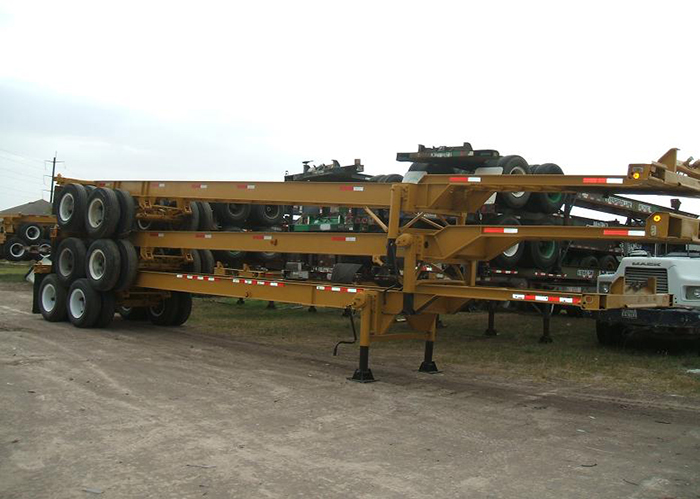 A new fee for chassis services at the ports of Los Angeles and Long Beach has raised shipper ire and already been postponed once.

Equipment-leasing companies, in a show-cause petition to the Federal Maritime Commission, are asking regulators to direct terminal operators in Los Angeles-Long Beach to “cease and desist” from imposition of a $5 chassis services fee scheduled to take effect on Sept. 1. The leasing companies charge the proposed fee violates the Shipping Act of 1984.

The FMC said Tuesday the commission at the staff level “is definitely gathering more information” through correspondence with the terminal operators in LA-LB. The petition is a ramp-up of pressure against the fee, which has also drawn the ire of shippers and truckers, because it goes beyond verbal complaints to a formal petition.

The chassis services fee is a residual development from the decision made several years ago by shipping lines to exit the chassis business in the U.S. trades. The controversy over the fee highlights while the carriers may have made a wise financial choice in shedding these costly assets, they also left it up to beneficial cargo owners, terminal operators and equipment-leasing companies to work out the details as to how the new regime will operate.

Three chassis-leasing companies — Direct ChassisLink, Flexi-Van Leasing and Trac Intermodal — last week filed a show-cause petition with the FMC charging that the chassis services fee published last month by the West Coast Marine Terminal Operating Agreement violates the Shipping Act of 1984 because the fee “is not specifically authorized by the agreement.” They estimate the $5 fee could end up costing members of the supply chain in Southern California an additional $28 million a year.

The leasing companies also charge that the fee is an unjust and unreasonable practice relating to the receiving, handling and storage of chassis at their facilities. Furthermore, the petition filed by the leasing companies states that while the three firms must pay the fee, the arrangement creates an unreasonable preference for BCOs and others who bring their own chassis to the terminals and are therefore exempt from the fee.

John Cushing, president of PierPass Inc., which manages WCMTOA on behalf of the 13 terminal operators in the largest U.S. port complex, said in an interview the agreement authorizes the member terminals to publish the fee in the schedule that is presented to the equipment providers. The agreement also specifically allows WCMTOA to establish rates, priorities, terms of service and conditions for the interchange of equipment.

“In short, the agreement allows WCMTOA to do this,” Cushing said.

Since the dawn of containerization more than 50 years ago, the cost of storing chassis on marine terminals, stacking and unstacking of chassis with the use of longshore labor and the delivery of the chassis to truckers at the facilities was paid for in the throughput agreement that shipping lines signed with terminal operators. In fact, many of the marine terminals are owned by or are part of the same corporate families of the shipping lines they serve.

Several years ago the shipping lines began to sell their chassis to the three leasing companies at locations around the country, culminating in early 2015 with their largest U.S. operations, which are in Southern California. In order to promote efficiency, the leasing companies formed a “pool of pools” through which they interchange the equipment.

Although the ownership of the chassis has shifted from the shipping lines to the leasing companies, the equipment is still stored on costly waterfront land at the terminals. The petition states that in order to ensure there are sufficient chassis available to meet customers’ needs, the terminal operators established schedules “requiring that 31,000 chassis be available daily on the 13 terminals served by the pool of pools.” There are approximately 80,000 chassis in use at marine terminals, rail yards and moving to and from BCO warehouses in the vast region.

The shipping lines no longer pay the terminal operators to store and handle the chassis, and to notify the equipment owners, for use in their billing processes, which truckers and BCOs have the equipment at any particular time, so now the terminals want the leasing companies to reimburse them $5 every time a chassis enters and exits their facilities.

The leasing companies do not like this provision. “If a chassis made multiple entries and exits from a terminal or terminals, with loaded or empty containers, on the same day, the chassis services fee would be assessed for each entry and exit, so that the daily charges for the chassis services fee could exceed the daily published lease rate for a chassis,” the petition stated.

“Yes, we did calculate the fee,” Cushing replied. He said the terminals derived the fee based upon “acreage covered, labor costs and the cost of EDI.” He said terminals provide chassis usage  information to the leasing companies via EDI “so they can bill their customers.”

The leasing companies also object to a provision in the WCMTOA schedule of charges that states the fee and its terms will be “adjusted annually to reflect increases in labor costs based on Pacific Maritime Association maritime labor cost figures.” The petition states that this basis for the annual increase would have no relation to storage charges or EDI provisions. Cushing said that labor costs do, however, play an important role in the stacking and unstacking of chassis on the terminals, and longshore wages normally increase every year under the West Coast waterfront contract.

In addition to dealing with the legal requirements under FMC regulation of marine terminal operations, the terminals must also deal with the commercial and logistical realities of the complex port supply chain in which BCOs normally resist fees that are passed on to them by truckers or equipment-leasing companies.

These pressures are well known by shipping lines, which oftentimes absorb container storage and per diem charges on behalf of their largest customers. In the case of the chassis services fee, the charge would be issued to the equipment-leasing company, which presumably would pass it on to the trucker who would then pass it on to the BCO.