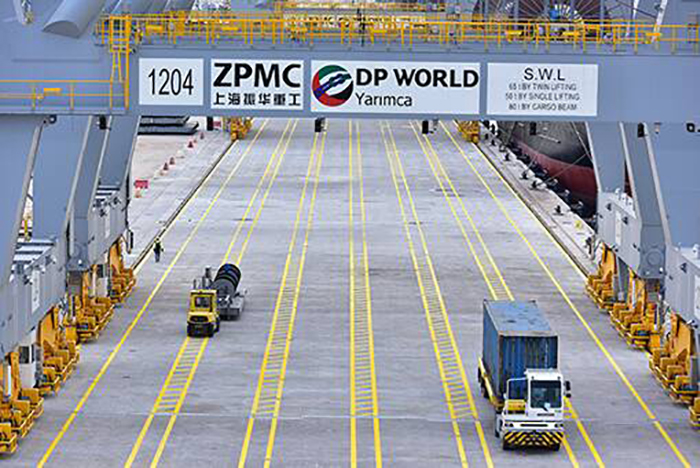 DP World hopes its Yarimca terminal, pictured, along with several others, will provide the growth it needs in the future.

DP’s World’s container traffic increased just 2.2 percent in the first nine months of the year as robust growth in Europe and India was offset by a decline at its flagship terminal at Jebel Ali in the United Arab Emirates.

Traffic in the consolidated terminals under DP World’s control edged 0.3 percent higher to 21.9 million TEUs but was down 2.3 percent on a like-for-like basis.

Volume in Asia-Pacific and the Indian Subcontinent was up 2.9 percent at just over 22 million TEUs, and the Americas and Australia posted a 5.4 percent increase to 5.68 million TEUs.

The negligible 0.6 percent growth in Europe, the Middle East, and Africa to 19.77 million TEUs was due mainly to a 6.7 percent shrinkage in the United Arab Emirates to 11.1 million TEUs as a result of a reduction in lower-margin transshipment cargo.

The slowing growth at Jebel Ali caused the company to delay expansion of the port. The addition of 1.3 million TEUs in capacity to be added at Terminal 3 will be postponed into 2017. The expansion of Terminal 4 will also be slowed down, but DP world has not provided exact details on that delay. Terminal 4 was initially set for a 2018 completion.

In pursuit of a more diversified portfolio in the future, DP World is investing $1 billion in India and has made plans to vastly increase its presence in Africa. The terminal operator also has plans to replicate its success at Prince Rupert on the west coast of Canada with an east coast terminal at Saint John, New Brunswick.

The company also recently won a 50-year concession to develop a new, $1 billion port in Posorja, Ecuador, 40 miles from the country’s primary business hub of Guayaquil. The greenfield port, which is expected to be completed in early 2019 and have an annual capacity of 750,000 TEUs, will focus on containers but have some capacity for additional types of cargo.

“While the near-term global growth outlook appears soft, we expect our new developments in Rotterdam, Nhava Sheva (India), London Gateway, and Yarimca to drive growth in our portfolio.”