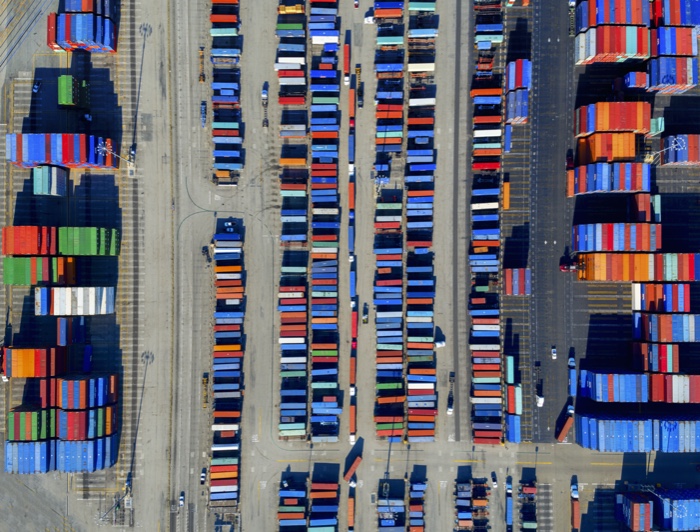 Data collection entities envision a prescriptive model that advises clients on how they can plan their supply chains at those locations to expedite the container move from the vessel to delivery at their warehouses. Photo credit: Shutterstock.com.

Service providers that gather data on truck visit times at US marine terminals and rail ramps are giving clients greater insight into operating conditions at those facilities. But firms that collect and analyze data believe the real gains will come when they can perform predictive, and eventually prescriptive, analytics in supply chain management, transport providers argue.

“The data exists,” said Weston LaBar, CEO of the Harbor Trucking Association (HTA). “Let’s share this data and use it as a predictive tool.”

Currently, the HTA, which collects and publishes truck turn-time data in Los Angeles-Long Beach and Oakland, provides its members with monthly information on operational conditions at the terminals expressed in average truck visit times at each of the terminals. Truckers, and some beneficial cargo owners (BCOs), use that information over time to recognize trends such as which days are the heaviest-volume days when terminal congestion and longer gate times are common.

In the future, however, LaBar said the HTA intends to be more predictive in its analysis, both for redundant events and in real time when exceptions occur, so truck dispatchers and BCOs can respond more quickly to an event, such as by redirecting drivers from a trouble spot to another terminal that is fluid. Eventually, artificial intelligence (AI) and machine learning will make the pushing of that data to users automatic so responses can be made in real time.

For example, Kuehne + Nagel provides its clients that ship through specific marine terminals and rail ramps with estimates of how long it is taking on average for delivery of containers at those facilities.

“They do what they need to do in real time to get stuff delivered,” Rooney said.

The next step, data collection entities say, will be to analyze specific trends and develop a prescriptive model that advises clients on how they can plan their supply chains at those locations to expedite the container move from the vessel to delivery at their warehouses. “For that we must use machine learning,” Rooney said.

The HTA since 2013 has collected and published monthly data on turn times at each of the 12 container terminals in Los Angeles-Long Beach, and over the past year in Oakland. HTA members use the data in outreach programs with the terminals. The outreach has resulted in reduced truck visit times and improved productivity for the terminal operators.

January marked a milestone in demonstrating that the cooperative efforts are working, LaBar said. The harbor as a whole in January achieved a record-low average truck visit time of 63 minutes. Declining container volumes this year are contributing greatly to the faster turn times, but during the six-year process of collaboration, both the terminals and the truckers have made changes in their operations that continue to enhance productivity and cargo velocity. “We have a great story to tell,” LaBar said.

Having achieved positive results with collection of turn-time data, the HTA is now working with BCOs and truckers to measure and use other key performance indicators to further enhance productivity at the marine terminals, LaBar said. The HTA is looking at turn time consistency at the terminals, the number of dual transactions that take place at each facility, and appointment availability, all of which feed off of each other and affect the total truck visit time, he said.

Such precise measurements take on special meaning in today’s environment where vessels deployed in carrier alliances scatter containers from a single vessel call throughout the harbor, in many cases resulting in deteriorating conditions for truckers.

A problem faced today by terminals, truckers, BCOs, and equipment providers in Los Angeles-Long Beach is the growing number of blank sailings — 111 in February and March in the trans-Pacific trades to both US coasts. As carriers slash weekly capacity, there are not enough vessels available to carry containers that have been unloaded back to Asia, so the empties are piling up at the terminals, in warehouses, and at truckers’ yards.

Access to real-time, accurate data from the carriers on blanked sailings and from the terminals on the cancellation of work shifts, combined with the use of artificial intelligence and machine learning to develop possible solutions, would help mitigate the current conditions, LaBar said.

“The BCOs should request this data,” he said. “The customer will be the driving force here.”

Even in normal times, though, data collection can drive progress. For example, truckers thrive when they are able to complete dual transactions. The driver arrives at the terminal with an export load or an empty container, and then picks up an inbound load in the same trip. With the consolidation of carriers into three large vessel-sharing alliances, containers are scattered throughout multiple terminals, and the incidence of dual transactions has dropped from 80 to 85 percent several years ago to as low as 10 percent at some facilities, LaBar said.

The HTA is investigating whether the data on turn times can be integrated with the appointment systems that are now mandatory at most terminals to increase the number of dual transactions.

“If we integrate the appointment systems with the trucks’ TMS [transportation management system], we can share the data two ways. Then we can use AI and machine learning to create real-time models,” LaBar said.

Kuehne + Nagel is analyzing shipment data for a customer going back to 2015 at various terminals and inland hubs and using AI and machine learning to predict port and door estimated arrival times, with the intention of using the data to develop a prescriptive transportation model for that customer, Rooney said.

When a single entity collects data in a standardized form at two different locations, such as in Los Angeles-Long Beach and at rail ramps in Chicago, the opportunity exists to develop a predictive model for the intermodal move through the ports to the rail ramp, LaBar said. For example, if vessel arrivals are running late in Los Angeles-Long Beach, or a snowstorm in the Midwest is affecting rail service in Chicago, the model should be able to revise estimated times of arrival (ETAs) in the supply chain, he said. The HTA is working with GeoStamp to see if such models can be developed.

Yet another step would be a collaborative process in which data collectors with a presence in certain locations agree to share the data with others who do not have a presence there, and those firms in return would share data from the locations they serve.

“Why not use the data to make our entire industry better?” LaBar said. The hurdle, he added, is to convince stakeholders that their information does not have to be considered proprietary.

In addition to improving supply chain efficiency, which would result in fewer delays and reduced congestion at marine terminals and inland hubs, predictive and prescriptive measures should result in measurable cost savings for supply chain partners, Rooney said.

For example, a trucker or BCO that must retain a chassis a day or two longer than they planned will incur a daily lease cost of $30 to $35. “Somebody has the pay that cost,” he said.