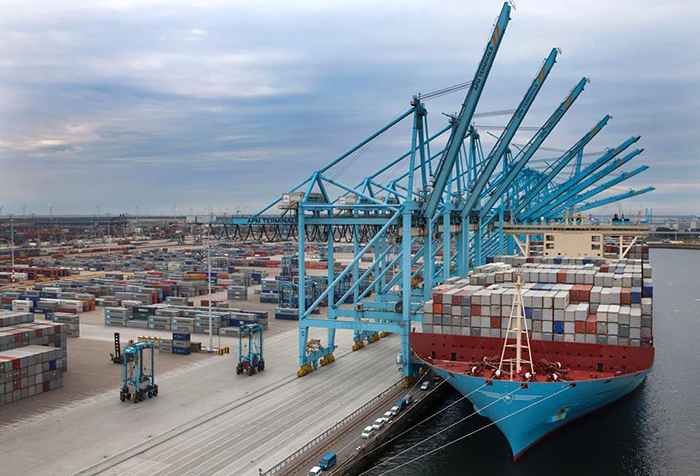 APM Terminals is looking for synergies with sister companies in a low-growth environment.

Terminal operators can expect downward pressure on tariffs to continue in certain markets over the course of 2017, according to the new chief executive of the world’s fourth-largest terminal operator.

In an interview with JOC.com, APM Terminals’ CEO Morten Engelstoft said he expected global throughput growth of between 2 percent and 3 percent in 2017, with little prospect of a return anytime soon to the high growth rates enjoyed by terminals in the past.

“There will be growth, but we need to get used to a situation where the levels of growth are well below the high single-digit growth levels that we saw in the past.”

“There is no doubt there is pressure on tariffs in a number of locations. This has been the case for some time and it is probably fair to say it will persist in some locations in 2017. Pricing pressure is likely to continue in those places where the supply and demand balance is unfavorable.”

The past year witnessed a significant drop in container volumes at terminals in major oil exporting economies including Russia, Nigeria, and Angola, in part because the low oil price eroded the hard currency needed to pay for imports.

The most recent official figures available from Nigeria, for instance, show container traffic in the West African country fell by close to 30 percent in tonnage terms over the first nine months of 2016 compared with the same period the year before. The number of vessels calling at Nigeria’s ocean terminals during the period fell to an 11-year low of 3,347 compared with 5,014 the previous year.

“At the end of the day, if you have an unfavorable supply and demand situation, you will have pressure on rates. We are seeing volumes starting to stabilize in some of these locations and we are expecting some further improvement with the better oil price.”

Englestoft replaced former APMT CEO Kim Fejfer on Nov. 1 last year after a strategic review and reorganization of the businesses within the Maersk Group. He joined the group as a management trainee in 1986 and has held several executive posts, including CEO of Maersk Tankers, chairman and COO of A.P. Moller Singapore, and COO of Maersk Line.

He said there are a number of locations where the supply and demand balance appears to be firming up and that parts of Asia and India are looking positive in terms of growth.

“We see some bright spots in Asia and India where there is generally quite decent growth and quite a good balance between demand and capacity. Volumes are very strong at our facility in Vietnam, and we are also seeing fairly decent growth in China.”

There is currently a high degree of activity in relationships between terminal operators and shipping lines at the moment ahead of the resetting of the alliance networks in April.

“There is a lot of business out for negotiation at the moment. Because the alliances are larger, the potential to win or lose business is also larger. We have remained in very close contact with our customers over the past few months in order to make sure we are responding properly to their needs in this changing environment.”

APMT is pursuing synergies with sister company Maersk Line including joint initiatives to improve operational efficiency and productivity and to reduce costs.

According to Engelstoft, the position of the terminal operator alongside Maersk Line and Damco in the group’s newly formed transport and logistics division is an important advantage for the company in the global market, but APMT remains an independent company with its own objectives and targets.

“We can find synergies and ways to support each other in terms of business, operational efficiencies, digital solutions, and so on."

“However, more than half of our business is business that does not come from Maersk Line. We are an independent brand, with an independent headquarters and P&L [profit and loss] and we have a mandate and responsibility to serve all our customers.”

In addition to working on exploiting synergies with partners in the group, building cost leadership into the business in an integrated fashion is a core priority for the coming year.

An extensive cost cutting program, which included a 20 percent reduction in corporate costs at the company’s headquarters in The Hague, enabled APMT to reduce costs per move by 5 percent on average over the course of 2016, from $181 to $172.

The company has no immediate plans for new capital investments and will focus on bringing existing committed investments online as well as improving utilization of its existing 73 terminals in 69 countries.

APMT reported a 33 percent drop in profit to $438 million in 2016. The company handled 37.3 million twenty-foot-equivalent units last year, a rise of 3.7 percent on the previous year, mainly due to the acquisition of the Spanish Grup Maritim TCB, which added 2 million TEUs in equity weighted volume. Like-for-like throughput in 2016 expanded by 1 percent.