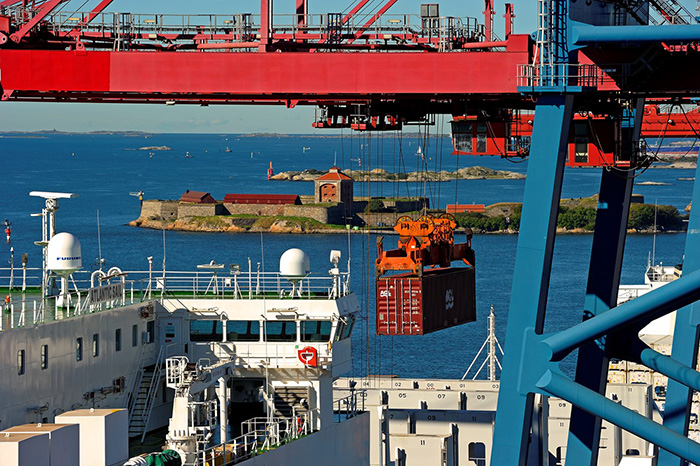 The low rate of crane moves per hour at Gothenburg is poised to sink further.

The Swedish government is coming under increasing pressure to intervene in the year-long industrial dispute at APM Terminals Gothenburg, Scandinavia’s largest container hub, which handles the bulk of the nation’s seaborne exports.

The terminal, which normally handles around half of the country's container traffic, is now operating at just 40 percent of its capacity in the wake of APMT’s partial lockout that began on May 19, triggering a unanimous vote by members of the Swedish Dockworkers Union (SDU) to continue a ban on overtime and the hiring of pool workers.

An extended dispute likely will force major exporters to overhaul their supply chains, with reports that some companies, including ball bearing manufacturer SKF, are considering trucking their shipments south to continental Europe to major deep-sea ports including Bremerhaven, Hamburg, and Rotterdam, an option which will significantly increase their freight costs.

“The port’s operation is crucial for us to be able to shift our forestry products to global markets in a cost efficient,” Karl-Henrik Sundstrom, CEO of Stora Enso Oy, one of the terminal’s leading customers, said in a letter to the government.

Shipping costs have escalated significantly since the lockout began, with Maersk Line imposing congestion charges of $100 per TEU and $200 per FEU for all cargo to and from Sweden in response to “substantial” traffic increases at other ports.

Using ports in mainland Europe would add $200 to $300 in costs and 4 to 7 days in transit times, according to a source close to the matter.

Smaller Swedish ports such as Helsingborg and Varberg are not a viable long-term solution as they cannot handle the latest generation of mega-ships that call at Gothenburg.

APM Terminals has said it will be able to offer “only a limited daytime” service during the lockout, which is scheduled to run through June 30 and has forced several container lines to stop calls at Gothenburg and divert shipments to increasingly congested smaller ports.

Delays have become so bad that Atlantic Container Line, which has been calling the port since the 1960s, is contemplating an exit, as the dispute has made Gothenburg ACL’s most expensive and least productive port of call in Europe.

Gothenburg’s poor productivity is likely to fall further, as a source close to the matter expects that the lockout coupled with the continuing bans on overtime and hiring of pool workers will bring crane lifts per hour down to 16.

The dispute centers on the SDU’s key demand for a separate bargaining agreement from that across the rest of the Swedish waterfront.

The dispute, which shows no sign of an early resolution, has prompted a move by the Swedish government to review the country’s labor system.

“I think we need to strengthen legislation of the Swedish model to make it work,” Labor Minister Ylva Johansson said following a visit to the port Tuesday.

“The long-running conflict in the port of Gothenburg is an example of when the Swedish model does not work in a satisfactory manner because the parties are unable to resolve the question of which organization is to sign a collective agreement.”

Johansson said the government plans to launch an investigation in the summer to review the right to take industrial action, blockades, strikes, and lockouts for purposes other than to regulate the terms and conditions of a collective agreement where the employer is already bound by an agreement.

APM Terminals has an agreement with the Transport Workers Union, but the SDU represents around 85 percent of its workforce.

“This is a measure to strengthen the Swedish model. It has not worked in the port of Gothenburg,” Johansson said.

Changes to the labor system could be in place within a year, she said.

But for now there is no peace deal in sight as relations between the two sides deteriorated at the end of last week after the SDU rejected APM Terminals’ offer to withdraw the lockout if it agreed to suspend its industrial action to allow negotiations to resume.

Following 14 blockades, 9 days of strike action, and an absenteeism rate of 25 to 30 percent over the past year “the situation has now reached the point where customers can no longer take reliable service for granted in Gothenburg,” said Henrik Kristensen, CEO of APM Terminals Gothenburg.

Maersk has canceled a call at Gothenburg by the 18,300-TEU Merete Maersk on the Asia-Europe service scheduled for May 30, with all import cargo to be discharged at the German port of Wilhelmshaven for onward shipment to Sweden.

A call by the 19,224-TEU MSC Oscar on the 2M Asia-Europe service, planned for June 6, has also been pulled due to a national holiday.

“The next step is for the Swedish Mediation Institute to resume its mediation efforts,” APM Terminals Managing Director Henrik Kristensen said.

Kristensen said APM Terminals, working alongside the mediator and the Confederation of Swedish Enterprise, will step up discussions with the government, in a bid to amend current legislation so that employers covered by a CBA cannot be subjected to blockades and other industrial action by a trade union that refuses to sign a sector-wide agreement.