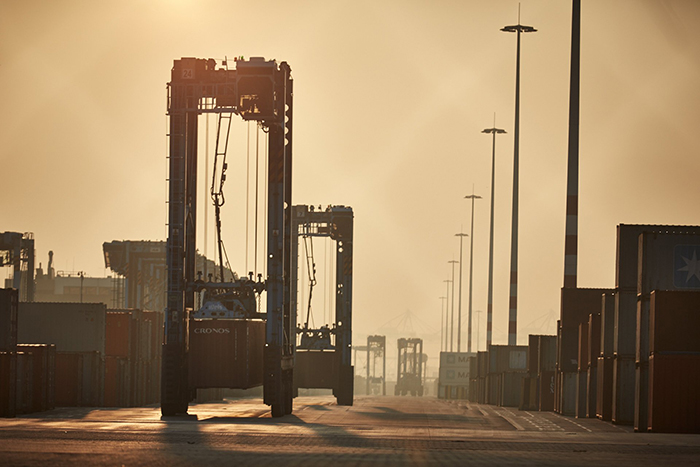 APM Terminals floated the idea of divesting from some assets, if overcapacity and rate pressure persist.

APM Terminals (APMT) said profit fell 15.7 percent year-over-year in the first quarter to $91 million as overcapacity led to increased rate pressure and its operations in West Africa continued to struggle.

The global terminal operating arm of the Maersk Group also said it lost services in the alliance reshuffle as lines chose more terminals based on ownership interest.

APMT handled 9.4 million TEU during the first quarter, up from 8.7 million TEU in the same period last year, mainly owing to the integration of volumes after the acquisition of Spanish Grup Maritim TCB. Like-for-like throughput expanded by 2.7 percent.

“The launch of the new container carrier alliances THE and Ocean and the cooperation of Hyundai Merchant Marine and Hamburg Süd with the 2M alliance has significantly shifted the market landscape in many ports. APM Terminals have in several locations lost services in this transition as the new and larger alliances in many ports have chosen terminal operators based on their equity interests.”

The company said there are no major new investments in the pipeline and that divestments may be considered. No indication was given of which facilities might be divested.

“While no major investment projects are being launched, the enlarged APM Terminals portfolio including the projects under implementation creates opportunities for consolidation and potentially divestments.”

Average revenue per move declined by 5.5 percent compared with the first quarter of last year, from $200 to $189.

APMT’s Latin America terminals were hurt by the consolidation of liner services. Terminals in the United States and Russia showed improved results although they still faced competitive pressure, it said.

An important development in the first quarter was the start of operations of the APMT Lazaro Cardenas facility in Mexico on April 4.

APMT said the integration of the TCB portfolio is now largely complete and that those terminals are generally performing according to expectations.

APMT reported a 33 percent drop in profit to $438 million in 2016 despite an extensive cost-cutting program and an increase in throughput at its global terminals, which handled 37.3 million TEU, a rise of 3.7 percent over 2015.

Industry consolidation had a detrimental impact on terminal operations in 2016, with fewer alliances and lines reducing the bargaining power of terminals in many locations, the company said. This factor contributed to a 9 percent fall in average revenue per move from $218 in 2015 to $198.