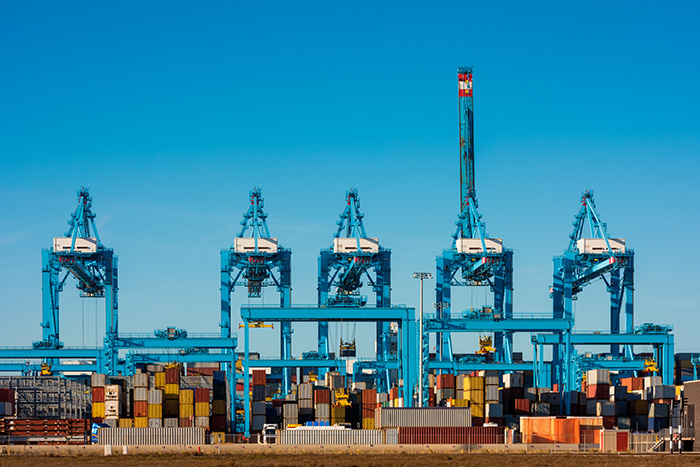 Maersk has reopened six container terminals crippled by a massive cyberattack earlier this week, but its automated terminal in Rotterdam remains closed.

The owner of Maersk Line and APM Terminals (APMT) said since yesterday it has re-established operations at its terminals in Algeciras, Tangier, Callao Lima, Mumbai, Itajai (Brazil), and Buenos Aires. Maersk said it is still working on expanding its services at Pier 400 Los Angeles and Port Elizabeth New Jersey.

Maersk said services that were due to call at the Maasvlakte II terminal in Rotterdam are being diverted to other terminals in and around the port.

“These facilities have already restored systems and are able to gate cargo in and out,” the Danish transport and energy group said.

The Rotterdam Port Authority said the cyberattack had not had a great impact on the port, Europe’s largest container hub.

“Although a very unpleasant situation has arisen for APMT and all its partners in the supply chain, no infections were found at other companies in the Port of Rotterdam, which was only affected to a very limited extent,” said Rene de Vries, the harbor master and port cyber resilience officer.

“We are seeing great progress in restoration of our infrastructure,” Maersk said in a statement to its customers.

“Our vessels remain fully operational, and cargo in transit is being handled close to normal.”

As it tries to resume normal operations, Maersk is using a mix of old and new technologies to communicate with its customers and service providers in order to unload and load vessels and move containers to and from affected terminals.

That is case at APMT Mumbai, where import operations are gaining momentum, but the terminal is not accepting exports, although it said it would gate in some export cargo, mostly refrigerated, for select sailings. Rail operations are also taking place manually, and three trains were dispatched from the port on Thursday.

Maersk Line is now accepting bookings both via INTTRA, online forms accessible on maerskline.com, and through electronic data interchange (EDI).

“EDI bookings you made since Tuesday are stored safely and will be batch confirmed early next week. All channels that have been open are confirmed safe for you to use.”

All bookings made before the cyber attack at 8 a.m. on June 27 “are secured and the date is saved in our systems.”

“For those bookings that were confirmed, equipment will be released as normal and you do not need to duplicate bookings,” Maersk told its customers.

Damco, an international freight forwarder and supply chain logistics provider and Maersk affiliate, was mentioned in the Maersk advisory as handling documentation without interruption. “Damco and its customers are working together on receiving and dispatching of container freight station shipments. With this Damco remains operational across all of its main products,” the advisory stated.