Maersk booking cargo but some US terminals still shut

Maersk booking cargo but some US terminals still shut 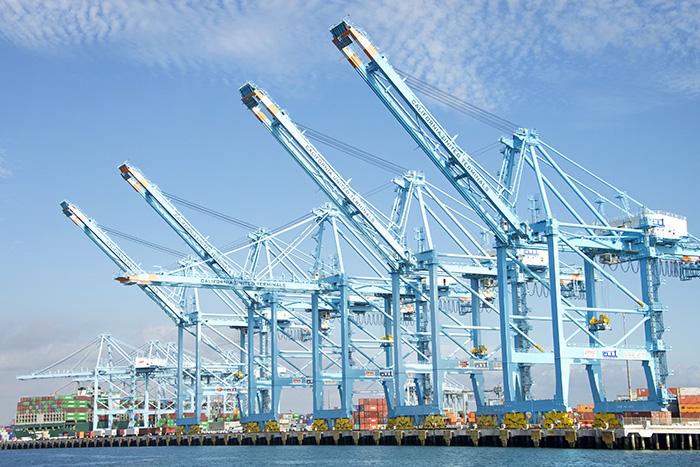 APMT's Pier 400 in the Port of Los Angeles has been closed since it was struck by a cyberattack Tuesday.

Maersk Line says it is close to bringing its operations back to normal after a massive cyberattack temporarily prevented the booking of cargo, but the largest US container terminals in Los Angeles and New Jersey operated by its sister company remained closed Thursday.

Although no serious delays or congestion problems are being reported, APM Terminals (APMT) and Maersk are bracing for a busy weekend with additional vessel arrivals. Marine terminal conditions up and down the West Coast and in other major gateways such as New York-New Jersey are further complicated by the global vessel-sharing 2M Alliance arrangement between Maersk and Mediterranean Shipping Co. (MSC) because some MSC vessels call at APMT and vice versa.

As it tries to resume normal operations, Maersk is using a mix of old and new technologies to communicate with its customers and service providers in order to unload and load vessels and move containers to and from affected terminals. In a customer advisory Thursday, Maersk said it is accepting new bookings throughout its operations via the booking platform INTTRA, via electronic data interchange (EDI) and online through a new simplified booking form.

“Rates issued prior to the system outage still stand, and no rate increases will be issued until our systems are restored,” Maersk said in a notice to customers sent Thursday afternoon. Shippers can determine which APMT facilities are open and which are not via this website. Experts said it resembled May’s “WannaCry” assault that crippled thousands of machines worldwide.

The liner shipping company was initially unable to offer new quotes or accept future bookings after the Petya cyberattack on Tuesday hit its information technology (IT) and communications infrastructure, with no access to EDI messaging that limited its ability to contact customers.

Los Angeles-Long Beach is ground zero in the United States for complications that can result from a global alliance arrangement such as the 2M. The Marine Exchange of Southern California reported Thursday that the MSC Lauren was scheduled to call at the APM terminal in Los Angeles but that terminal remained closed. The ship could have shifted immediately to MSC’s Pier T in Long Beach, but both berths at that facility were occupied Thursday by other vessels, said Kip Louttit, president of the exchange. The vessel went to anchor, and the exchange reported that it will call at Pier T as soon as a berth is available.

The situation at other West Coast gateways is not as complex. Oakland International Container Terminal (OICT) handles calls by Maersk, and OICT was not affected by the cyber attack on Maersk. Ed DeNike, chief operating officer at SSA Marine, which operates OICT, said Maersk is sharing its documentation via email, so the Northern California terminal is able to handle Maersk vessels without incident, he said.

Maersk vessels call at the Northwest Seaport Alliance berth at Terminal 46 in Seattle, which is not affiliated with APM. Therefore T-46 was not affected by the cyberattack and is able to handle Maersk ships, said port spokesperson Tara Mattina. The APM terminal in Tacoma handles only Matson ships, and the terminal operator is able to get the documentation it needs from Matson, Mattina said.

On the East Coast, the APM terminal in Elizabeth, New Jersey, said it would open Friday after being closed for most of the last three days. The terminal said it will operate a “modified” gate process, opening at 6 a.m. and operating with gate hours extended from the regular closing time of 3.30 p.m. to 7 p.m.

“Only import loads with US Customs and carrier freight release will be processed,” the terminal said in a statement. “APM will not accept export loads,” adding that it expected heavy demand for cargo and urging truckers to “meter your motor-carrier arrivals to minimize delays and congestion.”

At the same port, Port Newark Container Terminal saw more empty volume from the 2M Alliance as a result of APMT being shut down.

“There is a lot of confusion,” said Dick Jones, executive director of the Association of Bi State Motor Carriers, adding that “we are seeing more traffic congestion,” in large part because the closure of APMT means empty containers are being diverted to other terminals.

“They have got three days without being open,” he said. “It’s going to be chaos. The companies are going to send the drivers to pick up the boxes. The drivers are not going to be happy because of long lines.”

Vessel arrivals posted on the Marine Exchange of Southern California show the coming week will be busy for the APM terminal in Los Angeles and for Maersk vessel arrivals. Work on the Gunvor Maersk, which arrived on Monday, is scheduled to be completed on Friday. The Maersk Evora, which arrived on Tuesday, is also being worked and is scheduled for departure on Sunday. The Gjertrud Maersk is scheduled to arrive in Southern California on Monday and the Maersk Antares on Tuesday. Six Maersk or SeaLand vessels are scheduled to arrive at the APM terminal in the coming week.

Damco, an international freight forwarder and supply chain logistics provider and Maersk affiliate, was mentioned in the Maersk advisory as handling documentation without interruption. “Damco and its customers are working together on receiving and dispatching of container freight station shipments. With this Damco remains operational across all of its main products,” the advisory stated.

In Southern California, truckers have not yet reported any significant changes in their operations, said Weston LaBar, executive director of the Harbor Trucking Association, although APMT has not yet reported when it expects its Los Angeles terminal will reopen.