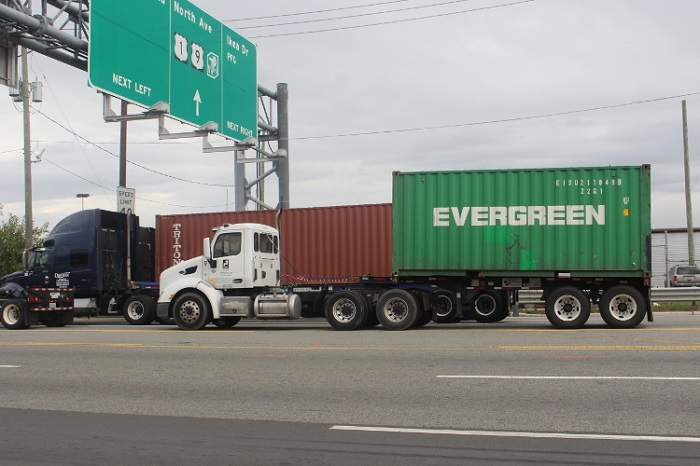 Shippers will likely see a substantial benefit from a new refrigerated container option for a peel-off pile program at the Port of New York and New Jersey. Photo credit: Hugh R. Morley.

APM Terminals is adding a refrigerated container option to its peel-off pile program at the Port of New York and New Jersey that the terminal said can cut trucker turn times in half and help with space limitations, as it undergoes a $200 million upgrade in preparation for a surge in mega-ship arrivals.

The terminal launched the refrigerated box program last week after a successful test with a large customer that included removing 50 boxes in five hours, said Giovanni Antonuccio, general manager of client services for APM Terminals, adding that two companies have already opted to participate in the refrigerated peel-off program.

Peel-off, also referred to as free flow or flow stacks, is a productivity strategy in which all the import boxes for a single shipper are removed from a ship and placed in a single pile in the container yard of the terminal, so that truckers assigned to pick up the cargo go straight to the stack. Each driver takes the first box available as it is peeled from the pile, rather than waiting to pick up a specific container buried in a container stack.

APM Terminals has been running a dry-box peel-off program for three years that can handle loads of up to 300 containers, with a price per box that varies depending on the situation, but ranges between $50 to $75. At least 10 customers use it regularly and the terminal tested the refrigerated peel-off after a trucking company inquired whether one was possible, he said.

The test, using underslung generators that clip onto the trucker’s chassis and don’t need to be mounted each time a box is placed on the chassis, proved that the peel-off pile could be a “creative way to rapidly deliver full import reefer loads,” Giovanni Antonucci, director of APM Terminals, said. Reefer containers account for about 6 percent of the terminal’s volume of about 900,000 containers a year.

The ports of Los Angeles and Long Beach pioneered the peel-off concept in 2015, and the strategy is often used by large beneficial cargo owners (BCOs), which have enough volume to warrant the creation of their own pile. The two ports are now teaming up with technology provider E*Dray on a system that will help coordinate the different parties involved in a peel-off pile and help them communicate, an effort which is partly aimed at enabling small- and medium-sized customers to take part in the program. Oakland International Container Terminal also uses peel-off piles, and the ports of Tacoma and Seattle have experimented with the concept.

In New York-New Jersey’s peel-off program, “the benefit to the customer [is that] the trucker can reduce turn times by at least 50 percent,” Antonucci said.

The main benefit to the terminal is that containers are swiftly removed from the terminal, vacating space needed for other cargo, rather than the containers remaining on the terminal for days and waiting to be picked up one by one, Antonucci said. “Our goal isn’t the revenue. Our goal is the space we get back for the delivery the next day and get our truckers out faster.”

The program doesn’t necessarily work only for larger volumes of containers, and the efficiencies can work for small peel-off piles if the containers can be easily removed from the vessel, Antonucci said.

APM Terminals, like others in the Port of New York-New Jersey and urban ports elsewhere around the United States, is grappling with how best to use the limited space available as cargo volumes rise with little extra space to expand into. The terminal in December enacted a plan to remove a chassis depot from the terminal, a strategy which has been adopted by all of the four main terminals in the port.

The terminal’s $200 million upgrade includes new gates, cranes, and other equipment as well as dredging and strengthening of berths that will enable the terminal to handle ships up to 18,000 TEU. The upgrade will increase the capacity by more than 65 percent, from about 1.55 million TEU to 2.75 million TEU.

Steve Schulein, vice president of drayage and industry relations for National Retail Systems, in North Bergen, said he has used APM Terminals’ peel-off program several times, in some cases to pick up 100 containers, and found it “very productive.” He said he needs to pick up at least 50 containers to make it worthwhile, after which the claim that it can cut turn times by 50 percent is “not far off.”

“You get an exclusive lane. There is no wait. We are the first ones in the terminal,” said Schulein, adding that his drivers can get at least one additional turn each day when the peel-off pile is functioning.

APM Terminals is one of three terminals that in June 2017 became accessible for the first time to vessels greater than 9,500 TEU with the completion of a project that raised the height of the Bayonne Bridge from 151 feet to 215 feet. That elevation, and the opening of the expanded Panama Canal in June 2016, have increased the number of mega-ships calling at New York-New Jersey and the flow is expected to increase in the future. In the first 10 months after the raising of the bridge, the number of vessels larger than 10,000 TEU increased by more than 63, to 93, compared with the same period in the year before.

Loaded cargo volumes through New York-New Jersey grew by 6 percent in 2017 over the year before, to 4.77 million, as the East Coast volume grew by 6.2 percent. The volume of loaded TEU handled by the port in the first five months of 2018 grew by 8.3 percent over the same period in 2017, to 1.18 million TEU, with imports increasing by 8 percent and exports by increasing by 9 percent over the same period in 2017.

“What we are expecting is you are going to have more volume on less ships,” Antonucci said. “So we think that the BCOs are going to be shipping more freight, but less frequency of freight.

So I think this is going to be something in the future, where it’s going to be incumbent on them to move freight in this manner.”

However, the removal of large numbers of boxes, although an improvement at the terminal end, can create problems for the shipper, Antonucci said.

“The main challenge I hear from the customers is they don’t have warehouse or staging space to hold 50 or 100 containers to pick up on one day,” he said. “But I have seen customers work around that and acquire some property or have buddies say I can hold 20 for you, just to get them off the terminal.”

James G. Overley, CEO for East Coast Warehouse, said the company has used APM Terminal’s peel-off program for dry and refrigerated containers, and found it “enables us to pick up large blocks of containers in a short period of time with increased productivity that surpasses normal turn times.”

“The success of a program such as this depends on many factors: equipment availability (chassis, gen sets, owned equipment, etc.), close coordination with the terminal on details, and focused efforts on dispatch and driving teams,” he said. So far, “it works very well and helps advance the ultimate goal of helping to achieve supply chain optimization.”