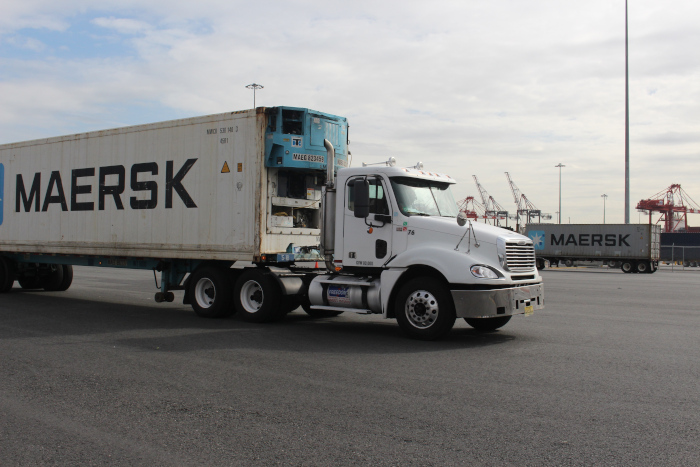 Truckers at the Port of New York and New Jersey will soon be able to monitor containers and book appointments through a new system at APM Terminals Port Elizabeth. Photo credit: Hugh R. Morley.

APM Terminals Port Elizabeth is looking to launch a trucker appointment system in the Port of New York and New Jersey at the end of February, creating the second reservation system at the East Coast’s largest port as it faces rising cargo volumes.

The terminal, in a statement on its website, said it would initially pursue a “soft roll-out” of the system. The terminal will use the TERMPoint system, which is used at other APM terminals, including Los Angeles.

APM’s announcement comes just over three years after GCT Bayonne launched the port’s first appointment system in December 2016. A third terminal in the port, Port Newark Container Terminal, has said it expects to launch a reservation system at some point, but has not set a date.

The APM appointment system is part of a $200 million terminal upgrade that includes a new gate system, new ship-to-shore-cranes, and new terminal operating system and berth strengthening that will enable it to handle three mega-ships simultaneously.

Details of the program’s soft launch weren’t immediately available. APM spokesperson Thomas Boyd said the terminal would reserve further comment on its appointment system until a training phase for truck dispatchers that began in late January is completed.

NY-NJ’s stakeholder committee, the Port Performance Council, has for several years said the introduction of an appointment system at the busiest terminals in the port was needed to ensure fluidity as vessel sizes and discharge volumes grow. The total volume of cargo handled by the port increased 1.5 percent last year to 5.23 million loaded TEU, according to figures released Monday by the Port Authority of New York and New Jersey. The port overtook Long Beach in 2019 to become the second-largest port in the US by loaded TEU, behind only Los Angeles, according to figures from PIERS, a sister company of JOC.com within IHS Markit.

In another initiative to improve flow, the port’s six terminal operators last week announced they are launching a pilot program to enhance the centralized information portal, known as Terminal Information Portal System (TIPS), that was launched in 2015 to provide greater visibility for containers in the port. During the pilot program, a shipper and trucker will receive information from the system that can be integrated into their in-house container management systems, rather than the two users having to go to the TIPS portal to look up the information.

Port truckers, including the largest trucking group in the port, the Association of Bi-State Motor Carriers, initially opposed the reservation system, fearing truckers would run into difficulties picking up or dropping off containers if they arrived late for an appointment due to traffic or other factors beyond their control. As the system proved its worth, the group and many truckers eventually embraced it.

Still, Tom Heimgartner, the association’s chairman, expressed concern in September that despite the success of the GCT system, having two appointment systems in the port could limit the flexibility of truckers and make it difficult for them to complete multiple moves in a day.