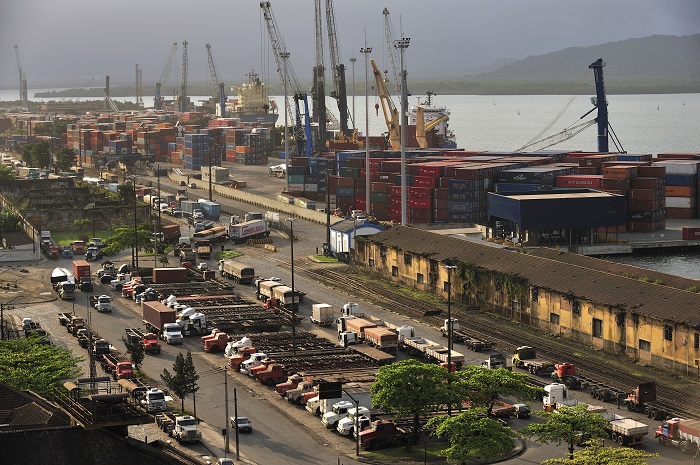 Above: The Port of Santos.
Photo credit: Shutterstock.com.

Dockworkers at Brazil’s port of Santos invaded a CMA CGM container ship, in the latest in a series of strikes and protests affecting container shipping, with the action causing a two-hour delay for shippers using South America’s leading port for containers.

Federal police (Policia Federal: PF) reported that seven dockworkers were arrested Wednesday evening, including the president of the Sindestiva dockers’ union, Rodnei Oliveira da Silva, and were detained overnight before being released on bail, following the invasion of the Mercosul Suape, a 2,474-TEU ship owned by CMA CGM. (In October, CMA CGM purchased Mercosul Line from Maersk Line.)

The Mercosul Suape, which operates in the Brazilian cabotage trades linking eight ports from Manaus in the Amazonas region to Itajai in the south, was berthed at Santos’ Terminal 35, owned by Grupo Libra when the incident occurred. (Grupo Libra recently filed for bankruptcy protection.) The ship was delayed two hours while the PF made the arrests but has since continued its service toward Itajai.

“The invaded ship was the Mercosul Suape, which was berthed at the Libra Terminal, and the federal police detained seven stevedores [dockworkers] who were taken to the police station,” José Roque, executive president of Sindamar, the Santos Shipagents Association, told JOC.com. “The focus of the strike has been on the container terminals operating in the organized port [Codesp] area. The strike should not affect the private terminals that will continue working as normal. The invasion of a vessel is neither good for the reputation of Santos nor for Brazil.”

Meanwhile, concerning the current three-day dockworkers strike at Santos, scheduled to end Saturday, reports are coming in from exporters and importers that they are suffering delays. Sindestiva is claiming that 5 percent of cargo had been affected by the strike by the second day. (Santos handled 3.83 million TEU in 2017.) Shippers are fearing the worst, as customs officers are also set to strike again. Those two actions follow the backlog that was created by a mixture of customs strikes and the 10-day truckers’ strike that ended in May. Those latter actions led to seven-day export delays in June and July — a backlog that only recently started to decrease.

Sindestiva, which represents the freelance OGMO workers, has experience in this type of job action. In 2013, it invaded/boarded vessels in Santos when DP World Santos (then known as Embraport), a private port entity — in accordance with Brazilian labor laws — sought to deploy only its own dockworker workforce, both onshore and offshore. Fifty members invaded the Maersk La Paz and camped out on board for two days, before they were persuaded to leave on conditions: Sindestiva won that battle, as Embraport/DP World continues to use OGMO workers for 25 percent of all operations.

Also, in 2013 Sindestiva boarded the Zhen Hua 10 heavy-lift vessel that was transporting cranes for Embraport and also threatened to board the Mercosul Manaus that same year. Sindestiva wants container terminal operators to allocate OGMO workers for 50 percent of all onboard operations, a workplace condition it last had four years ago.

“They [Sindestiva and OGMO] are fighting a losing battle, but they keep on fighting,” said one veteran Santos shipping consultant, who spoke on condition he not be identified. “In March of next year, the Supreme Labor Court [TST] has given Sopesp [the Santos port operators association against whom Sindestiva is battling] the right to dispense with all OGMO labor. In the meantime, the unions are upping the ante and trying to ask for a 50 percent share again, in the belief that Sopesp might extend the period for them to keep 25 percent.”

He added, “But boarding vessels is terrible for the crew and paints a very poor, and mainly unfair, picture of how we do things in Brazil.”

Currently, 2,500 workers are registered with OGMO. Its arrested leader, Nei Da Silva, defended his actions through a lawyer, alleging that the Mercosul Suape was using illegally its own crew to shift containers on board; he alleged he and six others had merely entered the Libra terminal and gone onboard “to investigate.”

An effort to contact the terminals was unsuccessful, but Sopesp, which represents all container terminals in the port, waived away all suggestions of illegal actions by its members.

"Our members carry out their operations, complying with all safety standards and with Brazilian labor and legally contracted," Sopesp said in a statement.

Sergio Aquino, the main negotiator for Sopesp versus the unions, said on Globo, the national Brazilian TV network, that it was absurd to think the terminals and shipping lines would break the law in this way.

“I can state categorically that no foreign labor is being used in Santos,” Aquino said. “But the TST has ruled that from March of next year the container terminals do not have to use OGMO or any casual labor. However, we are still happy to negotiate with Sindestiva.”

After the boarding incident, authorities upgraded security in Santos to Grade Two, which means Brazil’s military police are on standby to assist the PF, if picketing at the gates becomes violent in the days ahead.

Further, as noted, dockworkers in Santos by Saturday at 7 a.m. Brazil time will have completed the third day of their strike action, and the group is threatening to continue the picketing and strike, if progress is not made in talks with Sopesp.

Meanwhile, another complication for shippers may resurface Monday, as the Receita Federal (customs officers) voted this week to restart their strike action — which had been suspended since the beginning of July — because of a lack of progress in their union’s discussions with the government of President Michel Temer.

As a goodwill gesture, the Sindifisco union, which represents the customs officers, called off the strike actions, but now say they are ready to resume their protests to obtain a back-dated pay rise, a promise to maintain an existing generous pension plan, and an above-inflation wage increase.