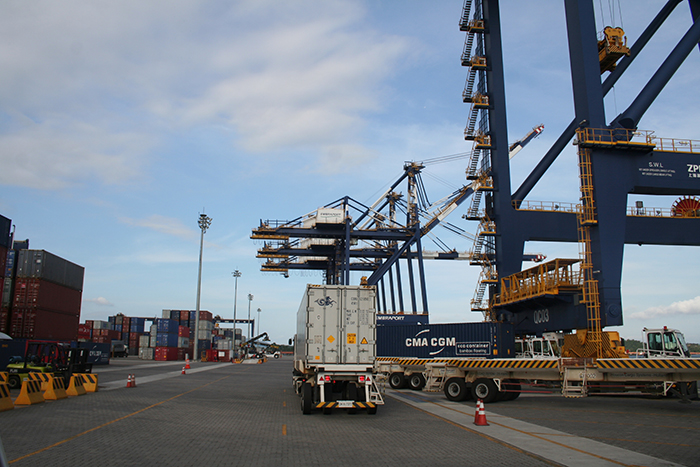 Embraport, one of Brazil’s newest container terminals in the Port of Santos, is looking to bring in a new partner to spread the risk of running the operation against a background of falling box volumes in Brazil, sharp falls in profitable imports, and overcapacity at Santos.

The terminal also needs more investors because its largest shareholder, Odebrecht Transport is part of the Odebrecht Group, a company whose CEO and president Marcelo Odebrecht was arrested as part of the Car Wash scandal involving the state oil company Petrobas and titans of industry and policy. The arrest of Odebrecht has tarnished the namesake brand and taken a serious toll on the firm’s revenues both domestically and internationally, forcing the company to raise cash, according to a source close to Embraport quoted in the respected Brazilian financial newspaper Valor Economico.

Embraport’s location on a greenfield site and ample room to grow on the left bank of the port gave it an immediate advantage over its competitors Libra Terminais, Rodrimar and Ecoporto, which are cramped together on the right bank.

Embraport and BTP came online in 2013 when it was believed Santos would continue to grow by 10 percent or more each year, but that has now proved to be a pipe dream owing to a poorly performing economy beset by political and economic problems mostly arising from the scandal. Embraport and Santos as a whole are also facing stiff competition for container loadings from Paranagua, the next major port to the south.

Overcapacity and a lack of growth have forced a roughly 20 percent cut in terminal handling charges, hitting terminal profits hard.

A shipping agent who works closely with Embraport said that he too had heard from reliable sources that DP World and Odebrecht Transport were seeking to refinance Embraport.

“The container business in Santos is not as lucrative as it was a couple of years ago because of the oversupply of capacity, but also the devaluation of the real, which is having a bad impact on imports,” the agent told JOC.com. “This is really hurting the bottom line for terminals like Embraport, who can make a lot of money from storing import boxes. Bringing in fresh money makes a lot of sense to spread the debt and share the risk.”

Embraport is a joint venture between Odebrecht Transport and DP World, with Odebrecht holding 66.6 percent of the company and DP World the remainder. The terminal operator had debts of around 2.2 billion reais ($614.3 million) as of October and its main creditors are the Inter-American Development Bank and Brazilian state-owned banks Caixa Economica and the BNDES, according to Embraport.

The 33 percent share Odebrecht Transport is considering selling is worth around 1 billion reais, according to Valor Economico.

So Far DP World and Odebrecht Transport have spent 2.3 billion reais on the 2.3 million square foot site, which currently has 2,142 feet of berthing length and annual capacity for 1.2 million TEUs, with another 3.2 million square feet to expand when the time is right.