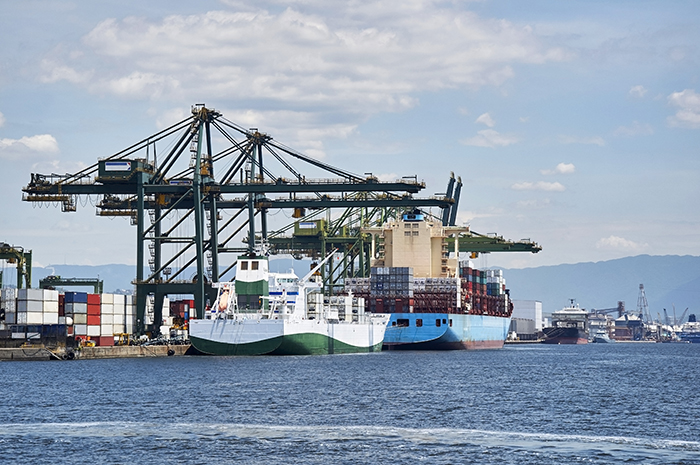 With freelance dockworkers striking over looming job losses, terminal productivity is down as much as 20 percent in the port of Santos, Brazil's largest container gateway. Photo credit: Shutterstock.com.

Entering a second week of strike pressure, Santos container terminals are holding the line against casual dock workers at the largest South American container gateway, as cargo is delayed due to some facility productivity being down by as much as 20 percent.

With the Brazilian Carnival season ending this weekend, employers fear that the striking stevedores from the OGMO casual labor pool and the longshore trade union Sindestiva will ratchet up the pressure on the five key Santos terminal operators to grant them concessions and continue to provide at least 25 percent of the stevedoring workload to OGMO members, as was required by previous labor laws.

Under port legislation implemented in 2015, the five terminals — Brasil Terminal Portuaria (BTP), DP World Santos, Libra Terminais, Santos Brasil, and Ecoporto Santos — are no longer legally bound to hire any OGMO workers as of March 1, the day the strike began. Five hundred to 600 of the 3,500 freelance laborers may find full-time employment once tensions settle, terminal managers tell JOC.com, but conversations around which workers will be retained stagnated in the weeks leading up to the March 1 deadline.

BTP, which is jointly owned by CMA CGM’s and China Merchant Holdings’ Terminal Link and APM Terminals, went as far as to build a wall of empty containers around the perimeter of the facility last week in an effort to prevent any incursion by the striking longshoremen. Backed up by federal police and the Brazilian Navy, terminal officials feared a repeat of last August, when OGMO dockworkers boarded a CMA CGM vessel during a similar strike.

The “manifestacoes,” or strong protests, and picket lines began at 8 a.m. local time Monday and will “continue indefinitely,” according to Sindestiva president Rodnei Oliveira da Silva. The protesters have returned to picketing outside Libra Terminal, where they began Friday, after having spent several days last week picketing outside Santos Brasil on the left bank of the port.

"We call on all our colleagues, both casual and bonded, to join our strike as it is very important to demonstrate that we can show that the companies are working with labor that does not have qualification for the stevedore function, and are thereby breaking the labor laws,” Da Silva told local media. “We need to call the attention of the authorities, the media, and society in general, so that they know what companies are doing with the life of the workers of the Port of Santos.”

The accusations have been falling on deaf ears, however, with the Santos port authority (Sopesp) remaining silent over the past week after reiterating its position in a succinct statement 10 days ago: “We no longer need to employ casual workers and we are complying with the laws.”

But with a 25 percent reduction in their stevedore numbers, many full-time workers are working long, even double shifts, which means negotiations on bringing in some of the 3,500 OGMO workers will have to take place soon. Sources tell JOC.com the five Santos terminals are also trying to bring in dockworkers from outside of Santos if the remaining OGMO workers are unwilling to work on full-time contracts.

A São Paulo-based port consultant said there have been some cargo delays as a result of the strike, “but nothing major as the unions are losing their power.” With regular stevedores working longer hours, productivity at the terminals is said to be low and getting lower by the day, causing delays and missed bookings.

“Whenever there is a strike in Santos, and there have been many in recent years, it usually takes about three to five days before it takes full effect,” said one shipping agent based in Santos. “This year it seems to be taking much longer because many shippers had the foresight of knowing the strike was coming just before Carnival and so already got their boxes into the terminal.”

The line manager of a major Europe-based carrier told JOC.com another reason the stevedores have not had the “intimidatory success” of previous years — when they successfully boarded vessels at Libra Terminais facilities and DP World Santos (then called Embraport) — is that the terminals and Sopesp have worked very closely with local authorities to mitigate the impact of the picket lines.

“A lot of the workers have been ferried across to the terminals by specially hired boats,” he said. “Also, mini-buses have been picking up other workers from carefully chosen sites in Santos and Guaruja [on the left bank] to avoid confrontations with the Sindestiva members and all the authorities have been very strong when the usual intimidations have become too aggressive,” adding that this “would never have been the case under the old PT [Workers’ Party] governments of Lula [former president Luiz Inacio Lula da Silva] and Dilma [former president Dilma Rousseff].”

Joao Emilio Freire Filho, a director with M A Consultoria e Eventos Ltd., a consultancy based in Rio de Janeiro, said the next few weeks might be the “final hurrah” for OGMO in the container category at Santos, and for Sindestiva as a “powerful union to be feared.”

“At last with a government that is prepared to stand up to over-powerful trade unions, our ports will become cheaper and more efficient to use and the whole country will gain,” said Freire.