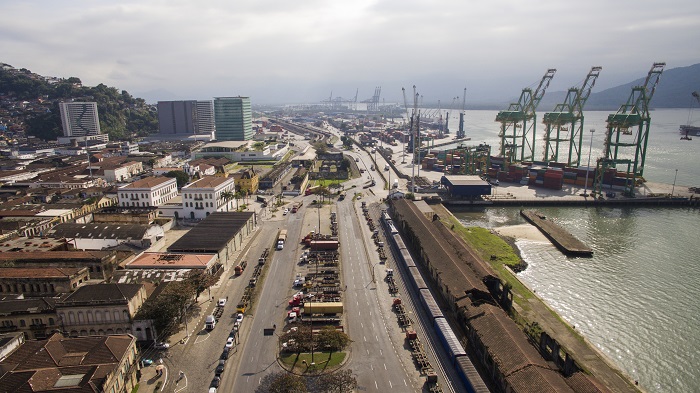 Within a year or so shippers and shipping lines will be saving shippers and ocean carriers a substantial sum, according to an industry official. Photo credit: Shutterstock.

The new year started on a happy, positive note for Brazilian Port of Santos users, with word that dredging costs could fall by 22 percent — to by 48.07 reias ($14.88) per TEU — as early as next year, and by as much as 39 percent in 2027, if the service is privatized.

That is according to the working group set up by transport authorities in Brasilia to find an alternative to the current inefficient dredging tender process, which one senior government agency official described as “a very Brazilian hell.”

The news is joyous for Santos port shippers and carriers because their costs have been substantially above the Brazilian national and international averages in recent years, due to poor management of the dredging tender process by Codesp, the port authority for Santos.

But now, after more than three years of heavy lobbying from various port and shipping industry groups, the old, deficient, and problematic system looks set to crumble and be replaced by a mostly privatized system — but one with possibly some involvement of a government body, such as Antaq, the regulatory body for ports and waterborne transport in Brazil.

At a meeting held at the Codesp headquarters in Santos, Sergio Aquino, the president of the Federation of Port Operators (Fenop) said that early findings from research undertaken by local universities in Santos and São Paulo suggest there will be major savings by giving the private sector the opportunity to carry out emergency and capital (deepening) dredging in the future, with the gains increasing over time.

Within a year or so shippers and shipping lines will be "saving millions of dollars each year,” according to the Fenop president.

"We presented the cost projections to the working group and they show that, considering the container movement forecasts for the Port of Santos, we will have major cost reductions in this service,” Aquino said after the meeting. “This will allow, in the future, for further tariff reductions and also for engineering studies, which will also improve the efficiency."

The Fenop president was referring to the plan to dredge down the entrance to an unprecedented 16 meters plus (52 feet), compared with today’s 13.2 meter draft if the geological and engineering surveys permit it.

One Santos-based shipping agent who has much experience of the machinations of Codesp and Brasilia — and indeed the political interplay between the two of them — said the privatization of the Santos dredging practice was “long overdue.”

“I think this is the only feasible way to keep costs down and maintain transparency,” said the veteran agent, who did not wish to be identified. “Over the years political parties and certain individuals have gained from their handling of the dredging budget, and part of it has gone to Codesp to help maintain more jobs than are necessary. There is also political patronage in the employment of many Codesp staff members and when a new regime comes in they have not always got rid of the existing staff, so over-staffing has traditionally been a problem.”

According to Aquino, this cost reduction should increase with the passage of time and the growth of the volumes moved. In 2027, the study’s projections indicate that dredging will cost 2.07 reias per ton of cargo moved or 37.51 reias per container, if dredging management is in the hands of the private sector.

Also sources in Santos and Brasilia are claiming a decision should be reached in the first half of 2018 on how the new privatization process can go ahead, and that it will be implemented before 2019.