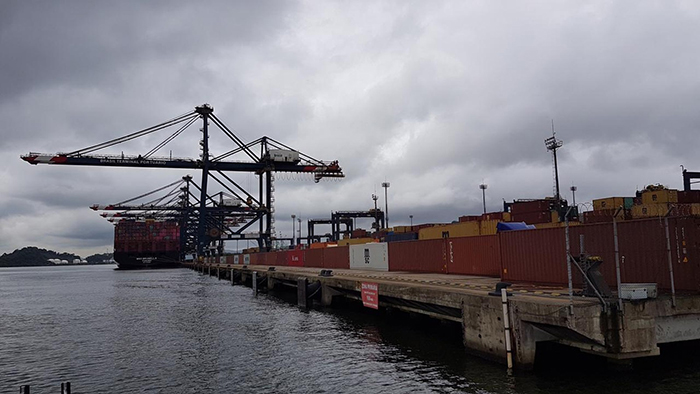 Terminal operators at Santos, Brazil's busiest container port, have built a wall out of empty containers in an effort to keep striking dockworkers from invading vessels. Photo credit: Sopesp.

Shippers using the Brazilian port of Santos are beginning to suffer delays amid a strike by freelance longshoremen, and terminal operators are going to great lengths to prevent dockworkers from invading facilities and ships.

One such terminal, Brasil Terminal Portuaria (BTP), came up with a novel way to avoid a repeat of last August, when dockworkers from the OGMO freelance labor pool boarded a CMA CGM vessel, causing major disruption in the port. BTP, which is jointly owned by CMA CGM’s and China Merchant Holdings’ Terminal Link and APM Terminals, built a wall of empty containers around the perimeter of the facility. They were backed up by federal police and the Brazilian Navy, who were in launches ready to block any boarding of vessels or access to the terminal via the quay.

One container terminal manager told JOC.com that the measures taken so far by the authorities were working in terms of stopping invasions of premises and vessels berthed, but delays were inevitably occurring and some cargo was being rolled.

“Because of the Brazilian Carnival celebrations, many exporters got their cargo in early and, of course, we can still unload boxes, but our shift workers are at full stretch and so delays are occurring and becoming longer,” he said. “I think if the strike continues beyond this Thursday and there is still no agreement with the unions, we will start to see more serious delays and problems at all of the container terminals.”

Sindestiva, the union representing the freelance dockworkers, says it sees this showdown as OGMO “fighting the final fight for their existence.” Under previous labor laws, terminal operators were obligated to use OGMO workers for a portion of all longshore work. Legislation passed four years ago, however, allowed terminals to gradually phase out the use of OGMO, from 75 percent to 66 percent, then to 50 percent, 25 percent, and finally down to zero.

Beginning at 7 a.m. on Friday, the official first day operators were permitted to use 100 percent employee labor, OGMO and the union formed picket lines outside the port, attempting to persuade full-time workers to join them. A few hours later, the strikers tried to storm the Libra Terminals’ T-35 facility, the same terminal invaded last year, only to be pushed back by Guardia Portuaria — port guards hired by port authority Codesp — with the Military Police on standby.

Sindestiva president Rodnei Oliveira da Silva said that the “incursion” was necessary because there were reports that in order to compensate for the lack of manpower caused by the strike, Libra Terminals’ regular longshoremen were “working illegal, longer-hour shifts and not taking their breaks.”

"We fight for our category to stay alive and for our rights to remain,” said Oliveira. “We are mobilized to make this even clearer and we do not offer any risk to the port, where it is our place of work.”

After the ship invasion last year, however, Codesp has promised to “use all means at our disposal” to make sure “there is not [a] blockade either on land or on sea,” including a daily fine of 100,000 reais ($26,475) on the union if such blockades occurred. The right-wing, anti-union government of President Jair Bolsonaro has also threatened severe consequences if the country’s transport arteries are blocked again, as they were last May for 11 days.

Meanwhile, Oliveira has argued that the initial decision to allow box terminals to eliminate freelance longshore labor was illegal. He claims the Santos Port Operators Association (Sopesp) changed the wording of the document from “casual labour and permanent staff” to “casual labor or permanent staff.”

As the port terminal manager told JOC.com, “This saga could run for some time yet, as Sindestiva and the OGMO workers have nothing to lose and a lot to gain.”

In addition to BTP and Libra on its right bank, Santos hosts three other box terminals: Ecoporto Santos, which is also on the right bank, and DP World Santos (formerly Embraport) and Santos Brasil’s Tecon Santos facility on the left bank. The port handled a total of 4.3 million TEU last year.