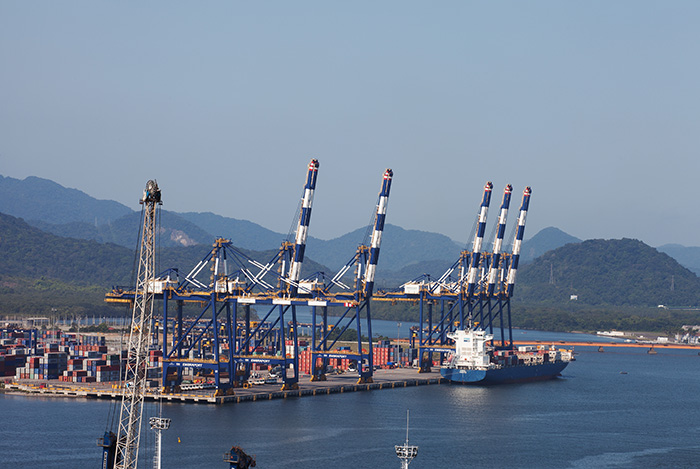 Shippers are concerned that capacity in the port of Santos will be stretched thin by the shuttering of Grupo Libra's T-35 and T-37 terminals. Photo credit: Shutterstock.com.

A Brazilian bankruptcy judge has told Grupo Libra it must “maintain its operations” at the T-35 and T-37 box terminals in the port of Santos, despite the terminal operator announcing last week it would shutter both facilities for good due to mounting debt and the loss of several weekly liner services.

Judge Paulo Furtado de Oliveira Filho of the Brazilian Court of Bankruptcy and Judicial Recovery ruled Grupo Libra must “honor its original 25-year contract,” which runs through May 2020, and continue paying its staff. The judge also ordered the family-owned operator to continue to pay tariffs to the Santos Port Authority (Codesp) equivalent to those that would have been charged on an annual throughput of 400,000 TEU, per the original contract. Libra handled 525,812 TEU in Santos last year, 12.8 percent of the port’s total volume, down from a peak of 801,500 TEU in 2012, when it handled 25 percent of the port’s throughput.

“Considering the unusual announcement of the recovery, I order that Grupo Libra take all measures to continue its operations while the judicial recovery process is in progress, keeping all the contracts in place,” Oliveira said.

The decision is a win for Codesp, which will receive additional income on top of the 2 billion reais ($515.2 million) Libra already owes the port authority as a result of a 20-year-old contract dispute.

With container ship calls ceasing at the end of the month, Codesp said Libra will continue to employ 400 of its 800 current workers in “warehousing activities” and handling less-than-containerload (LCL) cargoes, competing with Ecoporto Santos and Rodrimar. In the meantime, 11 ship-to-shore (STS) gantry cranes will lay idle in the Libra yards. The terminals’ 17 rubber-tire gantry cranes (RTGs) and 19 reach stackers, however, can be used by the LCL and warehousing business.

Shippers, especially coffee exporters, complained about a lack of capacity in Santos last year, and although DP World Santos says it can handle the extra 500,000 TEU switching over from Libra, operations could quickly become stretched at the three remaining Santos container terminals if the Brazilian economy picks up significantly, as many are predicting. Ecoporto Santos, which is likewise handling only LCL cargoes and warehousing services, also has four idle STS cranes, but shippers worry that if terminal capacity is affected, cargo handling rates would increase as a result.

After filing a request for judicial recovery (equivalent to Chapter 11 proceeding in the United States) in July 2018, Libra had hoped that an informal agreement with CMA CGM would develop into a long-term deal for the French carrier’s stevedoring arm, Terminal Link, to operate T-35 and T-37.

Prior to Libra’s announcement last week, Codesp president Casemiro Tércio Carvalho told JOC.com the authority had also been hoping CMA CGM would take over the container handling in Santos on a transitional basis, adding that it would begin a new concession process early next year.

A Codesp spokesperson said late last week it was “disappointed that the transition contract did not work out,” noting that the authority did not receive prior notice that Grupo Libra would be winding down on April 29.