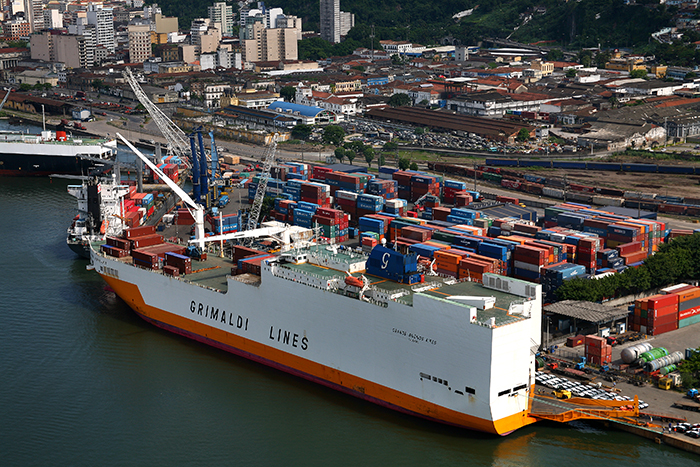 Grimaldi Group has thrown its hat into the ring for two multi-purpose terminals that will be concessioned in Brazil in the next two years.

The Italian-owned company, which has been operating roll-on, roll-off vessels and shuttling containers between Brazil and northern Europe for decades, has declared that it would be “very interested” in the government of Brazil’s concession plan for port terminals in both Suape and Santos, South America’s biggest port for containers and automobiles.

Grimaldi would be keen on joining the concession process for the sites if the tender documents – due for release early next year – are reasonably clear and transparent, Miguel Malaguerra, who is about to succeed his father Helder at the end of this year and become joint managing director for Grimaldi do Brasil, told JOC.com Wednesday.

Grimaldi is most interested in those concessions that tie into their core ro-ro business, which the concessions and Santos and Suape complement nicely, Malaguerra said. Grimaldi has long called at Santos’ Deicmar car terminal, and potential auto industry growth in Suape makes that northeast port alluring to the company.

Ford Motor Co. is growing its business in the region, which led to the Suape Industrial Port Complex dedicating Berth Four to ro-ro cargo. That facility will probably be concessioned out to private owners in early 2017.

But it is the Santos concession that is, in many people’s eyes, the jewel in the crown of the entire concession process.

The concession in question is the area originally dubbed the Super Terminal two years ago, when Brazil first mooted the process. This right bank facility will comprise the present day Deicmar car terminal, plus the sites of the Rodrimar container terminal, Termares inland box depot, the Suco Citrico Cultrale fruit terminal and three public berths (Santos Port Berths 1,2 and 3) stretching to 186 meters (610 feet) and covering an area of more than 120,000 square meters.

The new tender document for the “Super Terminal area” and three other berths will be broadly similar to that outlined back in 2013 by SEP, and the tender terms will include clauses that will insist the majority of operations will not be for containers, thereby guaranteeing that Santos, which is currently over-loaded with box terminals, will maintain a multi-purpose terminal into the future, Malaguerra told JOC.com. The facility will handle containers, but the emphasis will be on ro-ro and breakbulk.

Like many international terminal operators, as well as several from Brazil, Grimaldi was not at all interested in the initial concession ideas that were touted by the government shortly after the new Brazil port law (12.815/2013) was passed in July of 2013.

After unanimous dismay in the port community regarding those initial concessions, a federal government watchdog known as the the Tribunal de Contas da Uniao investigated the planned concessions and insisted on various changes, including awarding concessions to the highest bidder and not the company offering the lowest tariffs. These changes have since been adopted for the latest concessions of more than 110 port terminals that are expected to spur $10 billion in investment for Brazil’s ports.

“Now that the SEP (Special Ports Ministry) is giving concessions to the highest bidder it gives the winner the chance to take better advantage of the market and help get back the initial investment,” Malaguerra said. “And this kind of package is much more attractive to Grimaldi and other companies in the private sector. We are following the concession process closely and we will certainly consider the opportunities that might appear in 2016 when the new tender documents are revealed.”

“For sure we are interested in these two concessions,” he said, “and it is important for us that Santos sustains a multi-purpose terminal, so why shouldn’t we operate it. However, firstly we have to take a close look at the tender documents. As we all know, in Brazil, the devil is in the details.”