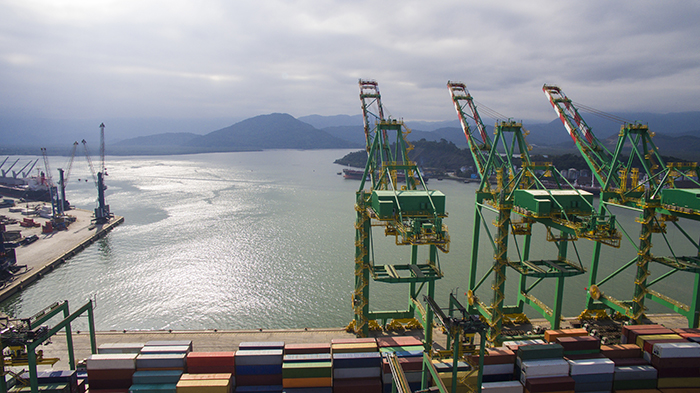 Shippers in the key South American port of Santos are bracing themselves for Carnival chaos after stevedores began an indefinite strike this morning at 7 a.m. local time.

Dockworkers from the OGMO freelance labor pool in Santos, Brazil’s busiest container port with 4.3 million TEU handled last year, will mount picket lines outside all five of the main container terminals in an effort to stem job losses at the port.

Under a new Port Law signed in 2013, March 1 is the first day that port operators in Brazil can use 100 percent of their own employees to handle dockside labor needs, as opposed to the previous legislation, which stipulates that 25 percent of that work must be carried out by stevedores from the OGMO pool.

There are 2,500-3,000 casuals registered with OGMO, and of these, approximately 500-600 will be asked to sign full-time contracts with the five Santos box terminals but at “much lower rates” than they would receive working their casual shifts, according to JOC.com sources. Compounding matters further, those sources say negotiations over which stevedores will be chosen for full-time employment have reached a standstill.

Terminal managers say they expect the strike to last until at least next Thursday, “to the end of the official Carnival holiday” and “possibly longer,” but one manager told JOC.com, “Savvy shippers will already have their export boxes in the terminals by now with Carnival on the horizon.” Even so, productivity will likely be down by around 20 percent, and the terminal executive said he is expecting “some dislocations and delays,” but nothing major provided stevedores return to work by next Thursday. “Because the strike, and indeed Carnival, has been pending, many exporters already have their boxes at the terminals, but with no OGMO workers, we will see productivity suffer for a few days and delays will be inevitable.”

Over the past year, stevedore union Sindestiva has been trying to get the Santos Port Operators Association (Sopesp), which represents 38 private terminals including the five box facilities at Santos, and Brazilian lawmakers to freeze the OGMO participation at 25 percent, having failed to get it boosted back up to 50 percent. After two weeks of discussions, Sindestiva on Wednesday announced it would begin the industrial action just one day before the Carnival holiday begins on Saturday.

Although only OGMO dockworkers will be on strike, they will mount picket lines and try to persuade regular, salaried workers at the terminals to go home. With most of the country on holiday until Wednesday, OGMO workers hope to capitalize on regular workers looking for an excuse to take time off to enjoy the all-encompassing Carnival celebrations.

Joao Emilio Freire Filho, a veteran port consultant for Rio de Janeiro-based M A Consultoria e Eventos Ltda. who used to work for both the Association of Brazilian Ports and Terminals (ABTP) and the Commissao Portus — two of the most influential port and transport lobbies in South America — said he believes the “once powerful dockers’ unions in Santos [are] now going through their death throes. They are desperate now and they are in the last chance saloon. The Ministry of Workers last year said that the private terminals do not have to call the OGMO and unions anymore, so they are losing all the work that they were entitled to, and they are losing all their power,” he told JOC.com. “Therefore, they are very worried.”

One port consultant based in São Paulo, Brazil said he thinks the “age of the casual worker in the container sector” is coming to an end in Santos, but he added that OGMO and Sindestiva must be monitored closely over the coming months.

“We should all remember that desperate people take desperate measures, and OGMO workers invaded a CMA CGM vessel at Libra T-35 [a box terminal in Santos] last August and invaded three different ships a few years before that at Embraport,” said the port consultant. “The terminals and the authorities must be wary that something similar does not happen this week.”

An executive at one of the five major box terminals at Santos said, “The unions have steadily been losing power over the past 15-20 years, so they must have known this day would come as casual labor is disappearing all over the world. I just hope things pass off peacefully as we work out which OGMO workers we take on to work with us full time.

“We don’t want to see ship invasions, Molotov cocktails, or any kind of violence,” the executive said. “When the previous invasions occurred, the political situation was very different. Now, the Military Police are aligned with the port authority [Codesp] and the government is a ‘law and order’ government, so the unions would be very foolish to provoke them.”

Since December, terminal operators in Santos and Brasilia have been respecting a regional labor court decision to extend the 25 percent minimum threshold for OGMO labor. Legislation passed four years ago allowed box terminals to gradually phase out the use of OGMO, from 75 percent to 66 percent, then to 50 percent, 25 percent, and finally down to zero.

Sopesp is coordinating the response from the five container terminals operating in Santos but has declined to comment on the impasse this week that led to the strike action.