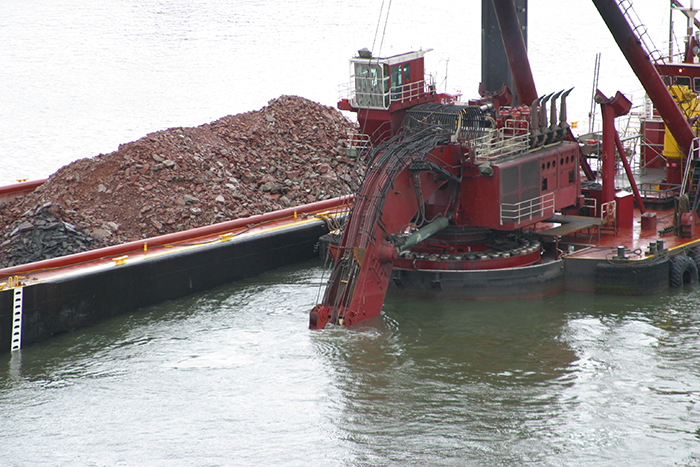 Ports throughout Brazil have been suffering from draft restrictions, but the decision to privatize dredging could offer relief to the country's busiest harbors.

The Brazilian Ministry for Transport, Ports, and Civil Aviation has decided to privatize dredging operations at the country’s top three ports of Santos, Paranagua, and Rio de Janeiro.

Santos in particular will welcome the news because it has faced draft restrictions throughout the last year, and the privatization effort could give hope to other ports that have been struggling with inadequate dredging, such as Itajai, that relief may be on the way.

“The government is pushing ahead with new regulations to transfer responsibility over to private companies and this will work much better and solve these various problems,” said Frederico Daguer Abdalla, the deputy secretary for port affairs at Santos city hall, who noted there are hundreds of different requirements to get dredging work approved.

Beginning the middle of next year the three ports will have private companies that are responsible for allocating dredging projects for maintenance and capital dredging.

The exact terms of the privatization have not been finalized, but reliable sources told JOC.com that the new set up will most likely be new joint ventures made up of the terminal operators at each port.

Each port is strategically important for Brazil. Santos, which handled 3.64 million 20-foot-equivalent units last year, moves 30 percent of all Brazil’s foreign trade. Paranagua is the world’s largest chicken-exporting port and is also a major gateway for soya shipments, while Rio de Janeiro has a large captive market in the country’s second-biggest city.

The privatization should make it easier to approve dredging projects, which in the past have been held up for a number of reasons including corruption, incompetence, and local or national political games, port users told JOC.com.

Santos, for example, has had a regular maintenance dredging contract cancelled three times since March 2015.

“The berths silt up and container vessels have to leave with draft restrictions, costing millions of dollars of losses to all parties concerned,” one user said.

The government now must approve an emergency dredging bill to bring the port’s current depth of 15 meters (49 feet) to 15.4 meters, which would still fall short of the intended depth of 15.7 meters. It has become so difficult to get even maintenance dredging done that Santos stakeholders have all but given up on their dream of going to 17 meters to handle the largest mega-ships on the water.

While shippers and other port users will likely welcome the shift to privatized dredging, not everyone will be happy.

The Santos port authority Codesp, for example, gets most of its income from the approval of dredging works and disbursing of related funds, and it is unclear where the agency would find other sources of income were it to be cut out of the dredging process, a Brazilian port consultant told JOC.com.

The privatization itself could be another issue, the consultant said, because of possible disagreements over how much share each terminal will have in the ventures, and how much each terminal is willing to pay for dredging.

How to Improve OTIF: 15 Tips for On Time and In Full Delivery
END_OF_DOCUMENT_TOKEN_TO_BE_REPLACED