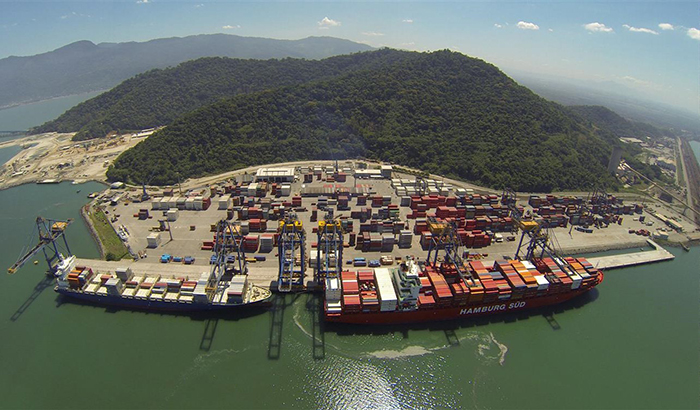 Sepetiba Tecon, pictured, is up for sale, and a delegation of Chinese visitors might be interested in the terminal.

The Chinese Olympic team wasn’t the only group of visitors from the manufacturing powerhouse in Brazil this month. Two different Chinese delegations toured the country looking for investment opportunities in Brazil’s ports, railways and other transport infrastructure.

Brazil is targeting Chinese investment to bring down its logistics costs in order to bolster an export-led recovery to its embattled economy.

One delegation of high-ranking Chinese businessmen included Hu Hong Rui, the director for Shanghai Port Services and several other leading officials from Shanghai. The group traveled throughout the country with freight forwarder Mac Logistic looking at investment opportunities in the city of Manaus, where a new port in need of funding is planned adjacent to a free-trade zone.

The delegation also visited the state of Rio de Janeiro, where the Sepetiba Tecon container terminal is looking for a buyer to spend about 1 billion reais to 1.5 billion reais ($470.5 million). In Rio, the group met with directors of the port authority and were brought up to date with current port tender regulations.

The group also met with executives from Multiterminais, which operates a container terminal in downtown Rio de Janeiro and is in the running to buy Sepetiba Tecon. Sources told JOC.com Multiterminais may be trying to get the Chinese to help them fund the purchase of Sepetiba Tecon and future investment there.

The delegation met with Taques to discuss funding and support for the 40-billion-reais Bi-Oceanic Railway connecting the Pacific and Atlantic oceans.

One experienced Brazil port watcher, who has worked in both private and government sectors, said the likelihood of Chinese investment in Brazilian ports was high, but investment in the Bi-Oceanic Railway was still “somewhat speculative.”

“It is very interesting that the Chinese delegation was in talks with Multiterminais as this company is one of the final three bidders for Sepetiba Tecon,” he said. “With its deep draft and proximity to Rio de Janeiro (45 miles away) Sepetiba Tecon has all the essentials to become a hub port for Brazil. A tie-up with Multiterminais to obtain a stake in a key hub port would be a strategic and profitable move for the Chinese.”

Brazilian companies need help as well, because economic and political turmoil has made it more difficult for them to secure long-term financing, the industry observer said.

Speculative as Chinese investment in the Bi-Oceanic Railway may be, it has the support of Brazilian shippers, particularly those in the landlocked state of Mato Grosso, who stand to gain from the lower transportation costs and shorter transit times that would make exports of soya and iron ore as well as chicken, beef and other foodstuffs more competitive internationally. Mato Grosso is Brazil's largest exporter to China, sending mostly soya, but growing volumes of beef as well.

The Brazilian Association of Animal Protein has eight target countries with which it aims to expand pork and chicken exports and five of them — India, Japan, Indonesia, Malaysia and China — would see transit times slashed if the Bi-Oceanic corridor became a reality.

Major food companies BRF Brasil Foods, JBS SA, Marfrig, Boi Brasil, Seara and Doux Frangosul are just some of those that would benefit.

When China’s Premier Li Kegiang in May 2015 visited Brazil, he signed an agreement between the two countries that promised 50 billion reais in infrastructure investments, which created the impetus for these most recent visits by Chinese officials.

The Bi-Oceanic Railway would involve the construction of 560 miles of track that would help complete the 2,800 mile Bi-Oceanic Rail Corridor, which was announced in an agreement between the Brazilian, Chinese and Peruvian governments last year.

During the visit between the ambassador and the Matto Grasso governor, the ambassador said he would need the state’s full support for the project to go forward, and the governor promised to lobby Brasilia for extra funding while carrying out feasibility and technical studies on the project.