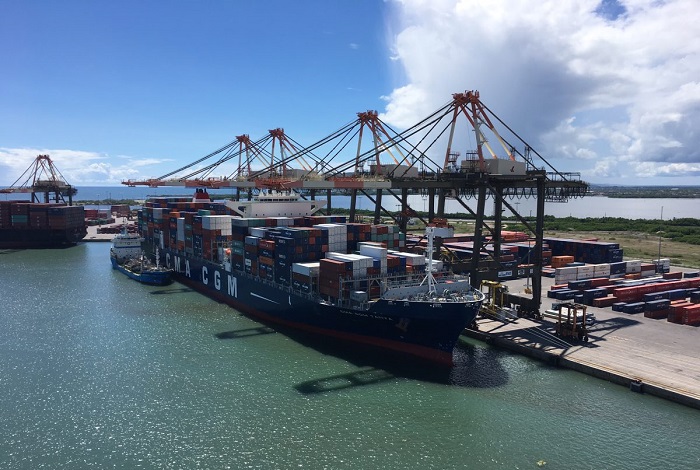 The good news for container lines considering hub options in the Caribbean Basin — and the bad news for terminal operators seeking to entice them — is that there is more than enough port capacity to go around, and it is about to get even more excessive.

Moin is a domestic facility with a heavy focus on the nation’s fruit exports, not a transshipment facility. “Moin Container Terminal [MCT] will handle more domestic cargo instead of transshipment cargo,” Serrano said. However, regional executives have long expressed concern in the medium and long term, [and] transshipment business will be added.

“Moin will have major implications for the Caribbean,” said Carlos Urriola, president of SSA International, which operates the Manzanillo International Terminal (MIT) in Panama. “For the first three years, yes, they will be doing gateway cargo. But after that, they will probably try to do some transshipment,” he predicted.

Michael Kristiansen, president of consultancy CK Americas, believes Moin’s domestic business could have a negative effect on regional transshipment. “Simply because it will be able to take bigger ships, it may favor direct shipments [to Moin] over transshipment [to and from Costa Rica] from elsewhere. The same thing happened on the Pacific side at Port Quetzal in Guatemala, where you now have Asian and European services coming in directly because of the 14-meter draft.”

When asked about this possibility, Serrano said Costa Rica currently has almost 12,000 container moves per week and the terminal is expected to boost trade by 23 percent. He said Moin’s direct business could supplant Caribbean transshipment “only if shipping lines berth at MCT with bigger vessels.”

Waiting for the go

A second major APM Terminals project in the region is the Compas SA Cartagena Terminal Operator (CCTO) facility in Colombia. In 2015, APM Terminals purchased a 51 percent stake in the multipurpose terminal, with local partner Compas SA retaining 49 percent. The facility has an initial capacity of 250,000 TEU a year, and a $200 million expansion plan was announced.

Asked about the project’s status, Serrano told Fairplay, “The environmental license [for the expansion] was issued on March 12. After the license was issued, the Ministry of the Interior requested a public consultation. To go forward, we need to first close the public consultation. The duration of this process in normal conditions is between six and nine months.”

In light of the takeover of Hamburg Sud by A.P. Moller-Maersk (APM), there is market speculation that a decision by APM Terminals to proceed with the CCTO expansion would be a major blow to SPRC, which operates two terminals in Cartagena — Contecar and Manga — and counts Hamburg Sud as one of its largest clients.

When asked about CCTO space limitations, Serrano replied, “Based on 2017 stats, the total volume of domestic cargo in Cartagena is about 550,000 TEU. After Phase 1, the capacity of CCTO will be 600,000 TEU, enough capacity to handle an important share of all domestic cargo and part of the transshipment in the Cartagena market. Phase 2, subject to volumes and approval, will increase the capacity to 750,000 TEU.”

Beyond the two APM Terminals projects, capacity is also being added by Chinese interests in Panama. The new transshipment project, Panama Colon Container Port (PCCP), which has been under construction since last year, is being developed by Shandong Landbridge Group and partners, with piers designed by Port Design Institute, based in Beijing, China. Including all phases, capacity would be 2.5 million TEU a year.

Despite skepticism toward PCCP — which has yet to secure liner clients — Panamanian sources confirmed that construction is well under way and the first phase is expected to be operational by the end of 2019. Kristiansen said PCCP’s arrival will render the Caribbean transshipment outlook increasingly “chaotic.” According to Giovanni Benedetti, vice president of SPRC, the emergence of PCCP “may bring some turmoil for Panama and us.”

Even more capacity is being built elsewhere in the Caribbean. In the Dominican Republic, DP World Caucedo is moving ahead with a long-discussed expansion. In an interview with Fairplay, DP World Caucedo CEO Morten Johansen confirmed, “We are adding another 400 meters of mainliner berth, which is already dredging to 17 meters, bringing the total to 1 kilometer of mainliner berth. We have already ordered three additional cranes, which will be delivered at the end of 2019, and we will start [operations at the new berth] in early 2020. Capacity would go from 1.4 million [TEU a year currently] to about 2 million.”

Capacity is also rising at CMA CGM-operated Kingston Freeport Terminal Ltd (KFTL) in Kingston, Jamaica. The first 600 meters of new berth at KFTL’s South Terminal was completed in February, allowing the terminal to accommodate ships of up to 14,000 TEU. The remaining two 300-meter sections were scheduled to be completed by the end of this year. Fairplay was previously told that the work would increase KFTL’s capacity from 2.1 million TEU a year to 3.2 million TEU a year.

On top of these capacity additions, there is more space available at Hutchison’s Freeport Container Port (FCP) in the Bahamas. FCP’s facilities were devastated by Hurricane Matthew in 2016, but it has since been rebuilt to its pre-hurricane capacity, bringing three new super-post-Panamax cranes online in July. But even though capacity is back online and FCP recently serviced its largest-ever arrival, the 12,000-TEU MSC Shreya B, Fairplay was told by a port source that “it is still awaiting the return of business” to bring it back to pre-hurricane throughput. In other words, FCP reconstruction has effectively led to more free capacity in the Caribbean hub sector.

This year is shaping up to be a strong one in terms of transshipment volume for the Caribbean hubs. In Panama, MIT’s January-July volume was up 14 percent year over year, while volume at Evergreen’s CCT grew 12 percent, according to data from the Panama Maritime Authority.

In Cartagena, Benedetti said throughput at SPRC’s Contecar and Manga terminals is on track to increase 10 to 11 percent this year over 2017. “Domestic cargo is growing — the Colombian economy is doing better — and transshipment is also growing,” he asserted, adding that SPRC plans “to expand our business more into the logistics side and warehousing to have a bigger domestic base, because we cannot focus only on transshipment.”

In the Dominican Republic, Johansen estimated that DP World Caucedo should handle about 1.31 million to 1.32 million TEU in 2018, up from 1.2 million last year.

For multiple Caribbean islands, this year’s cargo volume trend has been driven by recovery from the hurricanes of 2017, which left crippling damage in Puerto Rico, the US and British Virgin Islands, St. Maarten/St. Martin, Dominica, and Barbuda.

Island economies are enormously reliant on tourism, and the storm damage on some islands was so severe that the tourism industry was effectively shut down, causing the traditional flow of hospitality and retail cargoes to cease. But simultaneously, storm damage prompted a surge in emergency supplies and reconstruction materials as infrastructure was rebuilt.

From a cargo volume perspective, the balance appears to be positive. Data from the Government Development Bank for Puerto Rico show the value of the island’s imports fell from $3.7 billion in August 2017 to almost zero the following month when Hurricane Maria struck, then rapidly rebounded to pre-storm levels by December 2017 — and kept rising. By January of this year, import values reached $4.4 billion, peaking at $4.9 billion in May, marking the highest monthly total ever recorded.

Despite climbing imports, Puerto Rico’s near-term economic outlook is challenging. IHS Markit forecasts that GDP will fall 4.3 percent this year, by 1.2 percent in 2019, and by 1.9 percent in 2020, finally turning positive with a slim gain of 0.9 percent in 2021.

For the Caribbean as a whole, a key aspect of the hurricane-recovery equation is that regional cargo volumes tied to tourism did not appear to decline regionwide, as a result of certain islands temporarily losing their tourism product. Instead, tourism (and tourism-related cargoes) flowed to undamaged islands.

John Price, co-founder of consultancy Americas Market Intelligence, said, “The demand coming out of the US for Caribbean travel continues to grow. The US economy is doing very well and the other islands that were not affected [by hurricanes] are also doing very well. There was also some displacement beyond the Caribbean, to Florida and Mexico.”

According to Juan Carlos Croston, vice president of the Caribbean Shipping Association, “What we have seen is that the cruise industry has been a lifeline for the islands. The cruise lines have to continue serving their customers who want to go to the Caribbean, so the fact is that economic activity in the islands is continuing, just not on the same islands.”

Another important issue that affects Caribbean economies — and thus shipping volumes — is energy prices. The higher the price, the more pressure on consumers and the lower their discretionary spending on imports. “Every market in the Caribbean, except for [oil- and gas-producing] Trinidad, is very sensitive to oil prices,” Price explained. “The fact that we had relatively low oil prices from the end of 2014 until last year was really helpful to the Caribbean and Central America, and the creeping up of prices [in 2018] will hurt. The Caribbean has some of the highest electricity rates in the world because they’ve done a very poor job of converting to more energy-saving technologies and to non-oil sources.”

In addition, the region faces a looming challenge from the International Maritime Organization’s (IMO’s) 0.5 percent cap on sulfur in marine fuel, which takes effect on Jan. 1, 2020. The islands are served by small freighters and container ships that are unlikely to be equipped with scrubbers. As such, regional carriers will be forced to shift from heavy fuel oil to the significantly more expensive low-sulfur fuel. For regional carriers to remain in business, those costs would have to be passed along in the form of fuel surcharges, leading to inflation for locally consumed goods, almost all of which are imported by sea.

According to SSA International’s Urriola, “A lot of people feel that this [the IMO enforcement date] may be extended because nobody is going to be ready, but I think it’s going to happen and I think the Caribbean people should be concerned. They are not paying enough attention to this situation. Also, who in the Caribbean will be selling this [fuel] product?”

Croston believes there will be volatility in fuel pricing, but he is not particularly concerned about regional inflation from shipping fuel surcharges. “In the Caribbean, transportation is probably only 10 percent of the cost of goods, and maritime is a third of that, so if that 3 percent increases if you have a spike in freight costs [because of higher fuel surcharges], the effect on the price of goods shouldn’t be that bad, although it is a situation we’re following closely.”