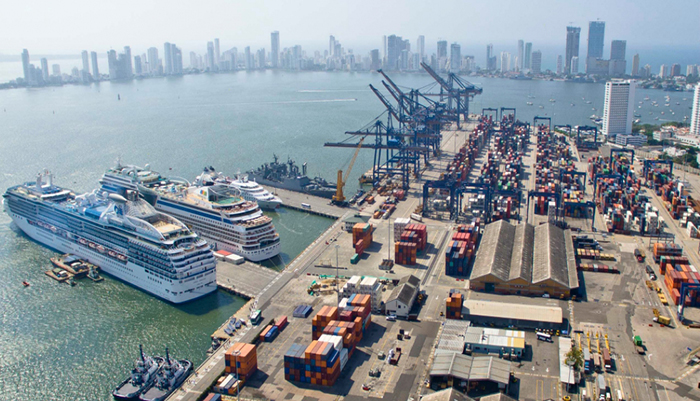 As vessel alliances change, SPRC of Colombia, pictured, and terminals around the world will face new challenges.

The days of multiuser container terminals could be coming to an end in the Caribbean, and dominant vessel-sharing agreements are leading the way as container lines push for more stability and certainty at their transshipment hubs, according to the head of a Colombian container terminal.

“Carriers are saying: ‘We want to be with you, the volumes are going to be large, we can commit for the long term, but we need to change the rules of the customer-provider relationship,’” said Giovanni Benedetti, the vice president of SPRC, which operates two highly successful multiuser terminals in Cartagena.

SPRC has recently received “a lot” of offers from carriers that have featured joint venture, long-term partnerships, dedicated facilities, and/or equity-for-volume structures, he said.

“Because these services are getting so large, the alliances’ concerns about their hubs are understandable,” he said. “If they are at a single hub, they think: ‘If these guys collapse, my system collapses.’”

The challenge from the terminal operators’ perspective is that in return for longer-term commitments, carriers “will of course press you on rates,” said Benedetti.

“The alliances are now driving most of the decision-making process,” said Juan Carlos Croston, the marketing vice president at Panama’s Manzanillo International Terminal, which is operated by SSA International. “This decision-making process is not necessarily based on which terminal is providing the best service, but on which of the partners (in the alliance) have equity in which of the terminals.”

This dynamic could create more pressure on unaligned terminals to partner with container lines, lest they be left out of future service maps. “You could see more terminal operators allowing shipping lines to take stakes in their facilities in exchange for volume,” said Croston. “If you’re a hub and you’re seeing volumes being driven somewhere else because of equity, you may try to find a partner.”

Croston said CMA CGM’s recent JV deal with terminal operator PSA International in Singapore is a sign of things to come. The deal covers four berths at the port of Singapore, allowing CMA CGM “and its affiliates” to better serve “mega vessels” at that hub.

MIT has not experienced the kind of carrier offers reported at SPRC. “We have not yet had an approach,” said Carlos Urriola, the senior vice president of SSA parent Carrix. When asked about the trend generally he said, “We’ve seen it. Not in our house, but in our neighborhood.”

Olivier Tretout, the CEO of Kingston Freeport Terminal Ltd., agreed that container lines are trying to put down more roots at transshipment hubs. “When you [a container line] are a shareholder in a terminal, you can negotiate some commercial conditions and you are represented in the management, so you can see what the numbers are. It is logical for a shipping line to elect a 'domicile,' to be at home. And the strongest long-term commitment you can have is equity,” he said.

However, the alliances’ evolving hub strategy faces several challenges, the first of which is severely depressed freight rates. In downturns of the past, liners have tried to sell non-core assets like terminal interests to boost liquidity, not increase their non-core investments.

“The curious thing is that these terminal facilities cost a lot of money and container lines supposedly don’t have a lot of money,” said Benedetti. “A lot of capital is needed to develop or acquire existing facilities.”

Urriola speculated that ocean carriers will push for volume-for-equity deals that do not involve cash investments. “The problem with equity-for-volume deals for terminals is that you get hit twice: you give equity away for free and then you get hit again because the carrier wants a lower-rate,” he said.

Another hurdle alliances’ hub strategy must overcome is conflict between alliance members over which hub to use. Such a conflict is already apparent in the Caribbean among Ocean Alliance members CMA CGM and Evergreen Line. CMA CGM operates a container terminal in Kingston, Jamaica, while Evergreen Line owns Panama’s Colon Container Terminal. The location of both in the Caribbean means that the lines must choose which one to use as their main transshipment hub.

One possible solution to such an impasse is an equity swap of terminal interests among alliance members, and several sources said that the Ocean Alliance is discussing this possibility.

The last challenge to long-term relationships between alliances and hubs is the fragility of the alliances themselves. “Alliances don’t last more than a few years, so I would expect that these deals (with terminals) would be subject to the alliance still being together,” said Urriola. “In other words, if the alliance is broken, the deal is broken.”

In a volume-for-equity deal, this could take the form of an agreement wherein an alliance that pulls back on promised volumes would lose a commensurate amount of its JV equity and decision-making power. This would not provide much assurance for the hub partner, Urriola believes.

“It would be like marrying a sailor,” he said. “You know that six months after the wedding, he’s going back to sea and you’ll probably never see him again.”

Global Shipping Outlook: A Sneak Peek at 2021
Port Performance North America: Managing Cargo Flow During a Pandemic — and Beyond
END_OF_DOCUMENT_TOKEN_TO_BE_REPLACED