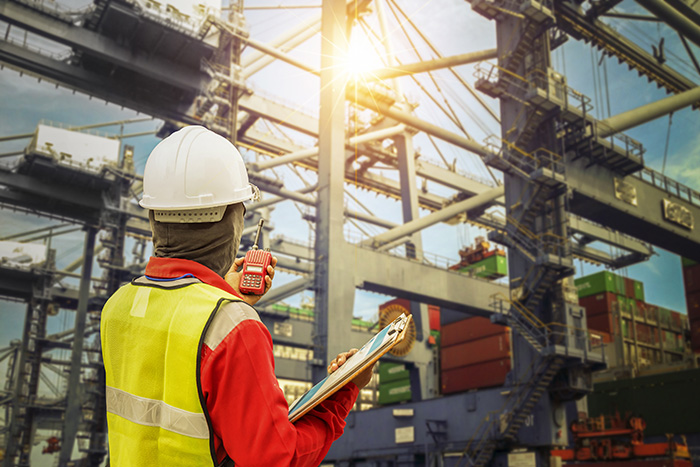 For ship calls greater than 6,000 TEU, it takes 48 seconds to move a container at Los Angeles — basically double the amount of time at some key Chinese ports. Photo credit: Shutterstock.com.

With a state of crisis continuing to plague container logistics in the US, resulting in severe cargo delays affecting everything from product availability to automotive supply chains and corporate earnings, bigger questions are starting to be asked about what led to the situation and what can be done to fix it.

The easy answer about what led to six straight months of container ships at anchor awaiting berths at the Los Angeles-Long Beach ports is the COVID-19 pandemic. The wholesale shift in spending by homebound consumers from travel and entertainment to home improvement has overwhelmed the capacity of the end-to-end system. Containers have been unable to be quickly offloaded and moved through terminals and then unloaded at jam-packed distribution centers, which has slowed down repositioning of containers back to Asia, reducing the capacity of the entire system.

With the US economy currently forecast by IHS Markit to grow by 6.2 percent this year, the fastest pace since 1984, several more months of port congestion is anticipated. No surprise, therefore, that the issue is coming onto the radar screen of policymakers, especially as the Biden administration promotes a $2.3 trillion infrastructure spending bill, which includes $17 billion for inland waterways, coastal ports, land ports of entry, and ferries.

As US President Joe Biden said in a March 31 fact sheet announcing his major infrastructure plan, “Our ports and waterways need repair and reimagination.”

But in looking at container freight transportation as a national policy question, uncomfortable issues need to be raised if any meaningful progress is to become a reality. Unfortunately, the industry regularly goes down rabbit holes. In recent months, for example, the conversation in the US around ocean transportation has been dominated not by how to fix or improve the system overall, but by a vocal agriculture exporter lobby complaining about their own specific issues around lack of capacity and container lines’ prioritizing higher-revenue imports over exports. Political pressure by exporters led the Federal Maritime Commission to open a formal inquiry and on April 7 to cite “reports of container ship lines and terminal operators unfairly taking advantage of the situation or denying service to exporters in a way that may violate the Shipping Act.”

But in terms of a national policy, ag exports are nothing if not a distraction. Agricultural exports in containers are moving in significant volumes despite the container shortage, while many have pointed out that capacity constraints at the root of ag exporters’ issues are hardly limited to the US market. As FMC commissioner and chairman-designate Daniel Maffei on March 2 wrote in Supply Chain Dive, along with fellow FMC commissioner Louis Sola, “Container shortages and export difficulties are an issue across the globe.”

The real issues that for years have served as a check on any discussion of shipping policy are related to terminal productivity and, by extension, longshore labor.

According to a carrier source referring to longshore labor on the West Coast, "that is just a hollow ground. You don't even talk about that. You know, we don't even try to influence that. But it's really the root cause."

"All of the talk on infrastructure spending is interesting, and realistically needed, IF they have a willing labor pool who will produce somewhere near major global productivity numbers and keep facilities open for business. Otherwise it's just an exercise in futility," said Gary Ferrulli, CEO of Global Logistics and Transport Consulting.

A long history of toxic labor-management relations, particularly on the West Coast, has led to many of the issues at the heart of US container flow today. Huge cost increases, limited ability to automate terminals, chronic avoidable disruption during contract negotiations, and far lower productivity and working hours compared with ports in Asia and elsewhere around the world are at are core of the issue.

As just one example, for ship calls greater than 6,000 TEU, i.e. most mega-ship calls, it takes 24 seconds on average to move a container at Yangshan, Qingdao, and Yantian, versus or 48 seconds at Los Angeles — basically double the amount of time, according to an analysis of three years of IHS Markit Port Performance data.

Ocean Network Express CEO Jeremy Nixon told TPM21 that berths in Asia work ships 24/7, or 168 total hours per week. Ships are worked 16 hours per day or only 112 hours per week at LA-Long Beach, and terminal gates only operate 88 hours per week versus 24/7 operations in Asia.

“Most factories are working 24/7; the terminals in Asia are generally working 24/7. Unfortunately, as we get into North America, we don’t have that 24/7 working environment here. We create this bottleneck,” Nixon said. Consider an issue like detention and demurrage, a chronic flashpoint between carriers and terminal operators on one side, and shippers, forwarders and truckers on the other; how many of these issues arise or are made worse because of underlying issues of productivity and working hours?

Because of the politics that surrounds organized labor, it is a third rail when issues of US container throughput are addressed. Concerns exist, for example, whether automation will lead to slowdowns or other disruption during the upcoming 2022 West Coast negotiations.

But if the only meaningful discussions with labor occur within the context of contentious and disruptive contract negotiations, no policy approach to the issue can hope to yield lasting solutions. Transportation Secretary Pete Buttigieg seemed to acknowledge the difficulties in stating last month that there when it comes to port congestion issues, there are no “easy fixes.”