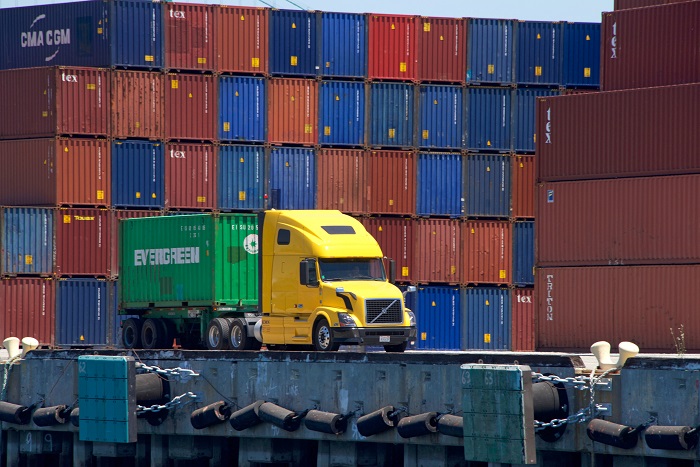 The E*Dray platform will enhance the ability of beneficial cargo owners and their truckers to aggregate containers into peel-off piles at the ports — and with the new system the potential is there for a substantial reduction in truck turn times. (Above: A truck at the Port of Los Angeles.) Photo credit: Shutterstock.com.

Harbor truckers and beneficial cargo owners (BCOs) in Los Angeles-Long Beach are teaming up with technology provider E*Dray to expand the use of container peel-off piles beyond just large BCOs to include smaller and mid-size BCOs and create a critical mass of shippers to expedite cargo flow in the largest US port complex.

Other US ports can view the expansion of the peel-off program in Southern California as an example they can capitalize on to establish a portwide network of shippers who aggregate containers into special piles that truckers can access for quick receipt and delivery of containers. Technology that links BCOs with truckers and terminal operators will allow this to happen.

Peel-off, also referred to as free flow or flow stacks, is a productivity measure that aggregates containers bound for BCO warehouses or nearby container yards into one large pile at a terminal. Truckers working for the drayage company or companies participating in the arrangement enter the facility and proceed directly to the stack, with each driver taking delivery of the next available container as it is peeled from the pile.

Los Angeles-Long Beach pioneered the peel-off concept in 2015, but growth has been limited because so far it has appealed mostly to large BCOs that generate enough container discharges from each vessel to justify a terminal assigning labor, and possibly a special gate, to make it work. Basic peel-off usually involves a single drayage company with whom the BCO has a contractual relationship.

Trucking companies support peel-off because it improves driver productivity. Rather than driving deep into the terminal in search of specific containers, drivers line up at the pile much like taxis at an airport, with each driver picking up the next container that is peeled from the pile. An efficient peel-off operation in Los Angeles-Long Beach can cut the average truck visit time of 87 minutes per truck in half. Harbor Trucking Association (HTA) data show that terminals with regular peel-off or dray-off operations maintain average truck visit times of 40 minutes or less.

In order to significantly impact productivity in a port complex with 12 container terminals that serve thousands of BCOs who contract with hundreds of trucking companies, which is the goal of both truckers and terminal operators, small and mid-size BCOs must be able to participate in the program. However, the port supply chain is a complex web of contractual relationships among BCOs and their truckers as well as relationships between those parties and shipping lines and terminal operators.

Connecting these supply chain partners manually is not possible, but information technology can make it happen. E*Dray has created a single platform for arranging truck dispatches, container pickups and deliveries, and billing. The HTA and E*Dray on July 31 announced the roll-out of a collaborative logistics platform that will link the marine terminals with inland destinations. “E*Dray standardizes and scales the blockstow, flow stack, and export street turn processes for the import and export community, including cargo owners and drayage companies of all sizes,” the company stated last week in a release.

Weston LaBar, CEO of the HTA, said the E*Dray platform will be the technology backbone for the type of peel-off operation that is needed to expand container free-flow throughout the massive port complex. Los Angeles-Long Beach this year will handle about 16 million TEU. “We look at free flow as the key to our members’ success in moving containers quickly and efficiently,” he said.

The complexities of cargo flow have intensified the past couple of years due to ocean carrier mergers and acquisitions and the formation of three large vessel-sharing alliances, LaBar said. Container exchanges from 14,000-TEU ships can exceed 10,000 containers per vessel call, but the ability of BCOs to generate a critical mass of containers for peel-offs is compromised because the port complex is visited by dozens of vessels calling at 12 terminals. Furthermore, BCOs have contractual arrangements with hundreds of trucking companies, with each BCO having negotiated its own rate to various destinations within the sprawling region, LaBar noted.

The E*Dray platform takes in all of the information from participating BCOs and truckers, allowing them to coordinate container pickups and deliveries, while reconciling the billing and payment for trucking services through its backroom operations, said Reade Kidd, president. For example, four trucking companies may collaborate to each pick up 20 containers from a peel-off pile and deliver them to a specific destination. Working through the E*Dray platform ensures that each trucking company assigns 20 drivers to that particular pile at the requested time. The BCOs have better control and visibility into the operation, and container velocity is enhanced because the drivers are dispatched directly to the peel-off pile for the next available container, rather than having to wait for a specific container to be delivered, he said.

By making it possible for a greater number of BCOs to aggregate their containers into peel-off piles for more destinations, the terminal operators, truckers, and BCOs — and for that matter, the entire port complex — will benefit through reduced congestion, shorter lines at terminal gates, quicker and more consistent delivery of containers to the receivers, and an overall reduction in diesel emissions in the region, said Kidd, who formerly served as international logistics director at Home Depot.

LaBar said the HTA has been working with E*Dray in recent months on a pilot project to address any glitches. They feel the platform is now able to deliver the improved productivity that is promised, he said. This will also entail support from the terminal operators, who appear to be on board with the project. “We support the peel-off piles,” said Alan McCorkle, vice president of Yusen Terminals in Los Angeles. “If they’re gaining traction, we’re ready,” he said.

As the peel-off effort attracts participation from more BCOs and trucking companies, the goal is to establish destination clusters throughout the region, LaBar said. For example, various locations ranging from Carson, California, about 13 miles from the ports, to Moreno Valley, 75 miles inland, house clusters of distribution warehouses. If land-use and environmental issues are successfully addressed, drop-off and pick-up yards in various inland locations will be developed. The improved efficiency at the ports will enable harbor truckers to make multiple trips per day, while truckers who shuttle containers between the stop-start yards and the warehouses will also experience improved productivity, he said.

The peel-off partners would also like to work with vessel operators for block stowage of containers in Asia to expedite the discharge process. The required number of truckers would be notified in advance of each vessel arrival, and the peel-off containers would be discharged from the vessels in blocs so the drivers can immediately pull them to destination. “Eventually we see free-flow extending from the stow at origin all the way through to the importer’s distribution center,” Kidd said.