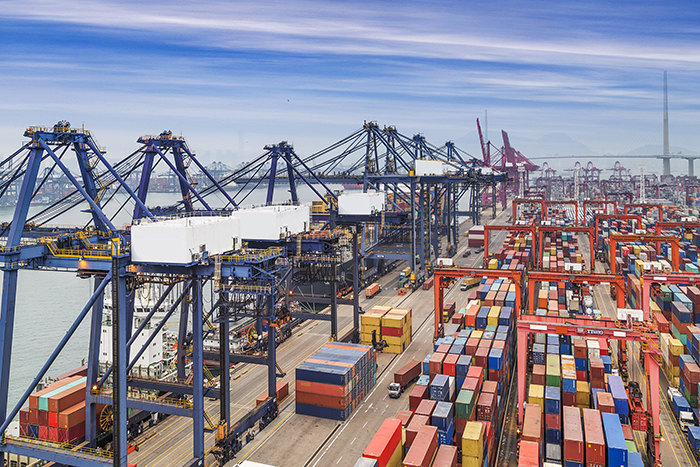 Average ship size increased between 2 percent and 5 percent year over year in all world regions except Latin America in 2019. Photo credit: Shutterstock.com.

The average capacity of container ships calling ports around the world, and the average amount of cargo exchanged per call, continued to grow in almost all regions in 2019, increasing pressure on global container terminal and port efficiency.

With the exception of Latin America, average ship size increased between 2 percent and 5 percent in all world regions in 2019 compared with 2018, according to IHS Markit port productivity data provided by the world’s largest ocean carriers. Capacity of ships calling at North American ports expanded 2 percent year over year, while ports in Southeast Asia saw the largest increase in average ship capacity at 5 percent.

Continuing the trend from previous years, average call size — the number of boxes exchanged per port visit — expanded at a significantly higher rate than average ship capacity in 2019.

“This can increase pressure on terminals [that] cannot always be mitigated through deployment of additional cranes,” said Andy Lane of CTI Consultancy.

Mediterranean ports registered a dramatic 13 percent increase in average call sizes during the year, while call sizes in Northern Europe were up by nearly 10 percent.

Call size growth outstripped growth in the number of cranes deployed to handle calls, resulting in each deployed crane needing to make more moves, which can prolong port stay times. The biggest gap in this respect was in North America, where a 7.4 percent jump in average call size was accompanied by a crane intensity growth rate of just 1.9 percent.

The larger call sizes and resulting higher number of moves per crane per port call resulted in an overall negative trend of ships spending more time in port. Looking at trends in port hours within specified call size bands — i.e., for similar workloads — a slight negative trend of 0.3 hours (1.2 percent) increase in hours per port call was observed in 2019 compared with 2018.

Although the average crane intensity per ship increased in Northeast Asia, Southeast Asia, the Middle East, and Northern Europe, the improvement was not enough to offset the increase in the number of moves per crane per ship. The global average gross crane productivity benchmark stood at 25.6 moves per hour in 2019, a 1.1 percent uptick from the year before.

When comparing these numbers to design maximums of about 40 moves per hour and to actual performance at the highest-performing terminals of over 35 moves per hour, it’s clear that there remains a significant opportunity to further improve efficiency.

“The other — and probably more significant — negative impact of larger call sizes is felt in container terminal storage yards, as the larger batches of demand result in higher yard utilization levels that in extreme cases can also reduce operating efficiency,” said Lane.

Impacts of bigger call sizes can also be felt at terminal gates and in intermodal corridors.

The continuing trend of expanding call sizes due to bigger ships, higher load factors, network rationalization, and consolidating port calls means that more than 20.2 percent of average call sizes at container terminals globally came in at 4,000 moves or higher, up from 18 percent in 2018.

“Although the change is relatively modest between 2018 and 2019, this is a continuation of the same trend from previous years dated back to before 2016. It is a well-known and documented challenge, so new solutions are needed to avoid undue impact on supply chain efficiency,” said Lane.

The amount of time vessels spend idle between their arrival at port limits and commencing steam-in to berth also increased on a global level in 2019. Although some regions, including Latin America, saw an improvement in average idle times, others such as Southeast Asia and the Mediterranean saw a significant deterioration.

Global average idle time was 1.75 hours, about 8 percent of total average port time in 2019. In productivity terms, idle time is considered “pure waste” that can be eliminated by better port call optimization and closer cooperation among ports, terminals, and ship operators. With more than 170,000 port calls globally per year, a total of 300,000 hours is lost to idle time, which if regained could save the industry up to $500 million in fuel costs.

The source data in the IHS Markit port productivity program is provided by 12 of the world’s largest liner shipping operators, which collectively control about 65 percent of the global container fleet. It comprises more than 2,800 individual ships making more than 170,000 calls at 458 ports globally, exchanging 217 million containers (350 million TEU). The data is enhanced with data from other IHS Markit proprietary databases, including ship movements and ship registry data. IHS Markit is the parent company of JOC.com.