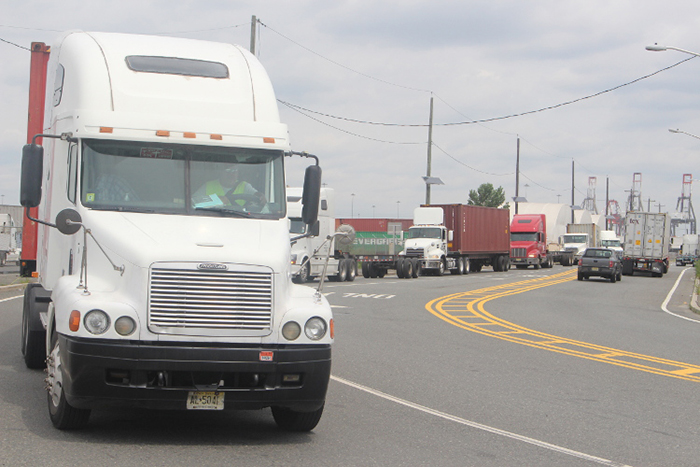 A line of trucks waiting on Tuesday to get into the APMT terminal in Elizabeth, New Jersey, where drivers complain of hours-long delays to get in the gates.

A major port drayage group said Tuesday that APM Terminals (APMT) should have kept its facility in the Port of New York and New Jersey closed until it had recovered from a cyber attack on parent company, Maersk Group, to the extent it could process cargo at near strength.

The terminal was shut down June 27 but reopened three days later, and the recovery has been marked by long truck lines outside the facility. Jeffrey A. Bader, president of the Association of Bi-State Motor Carriers, criticized the strategy after releasing a two-page action plan compiled by the association board of directors for addressing the problems that have plagued the terminal since the attack.

The association said members had suffered “incalculable losses” at the terminal in Elizabeth, New Jersey, due to the terminal’s difficulties. And Bader said the terminal should extend beyond Wednesday, the period in which it offers free demurrage and detention, saying that the difficulties truckers have in picking up containers at the terminal are likely to go on considerably longer.

In the 12 days since it reopened, the terminal has struggled to maintain the flow of cargo, going for much of that time without computers, email, and phones and documenting container arrivals and departures on paper. Even when the terminal was closed, it continued to accept vessels, which officials say created a container backlog that has slowed the recovery.

As a result, truckers say the line of vehicles waiting to enter the terminal has at times stretched for a mile, with drivers reporting waits of six or more hours to get in and out of the facility.

In response, Richard Carthas, senior director of operations for the Elizabeth terminal, said, “[APMT] took the position of looking to meet our customers’ needs in delivering service, and moving commerce, despite our operations running less than 100 percent.

“Many organizations were adversely impacted, including financially, by this unfortunate cyber attack, and had to adapt their operations to meet the challenge,” he said.

The attack crippled Maersk Line, third-party logistics provider Damco, and APMT, leaving customers of the world’s largest shipping line anxious for answers and wondering how long the disruption would last. The carrier said Monday that it was “servicing both import and export customers close to normally.”

APMT officials say the Elizabeth terminal is close to operating at normal strength. The computers have been up and running in 22 gate lanes for several days and will be in operation for the first time Wednesday morning in another eight lanes at a different gate, giving the port “full gate capability.”

Still, Giovanni Antonuccio, manager of client services and support for the terminal, said the facility was at about 70 percent speed processing trucks at the gate Tuesday.

“We are getting there, but we definitely have a long way to go to get back to where we were,” he told the association meeting.

Bader said the association is supportive and appreciative of APMT’s efforts, but said the problem for truckers is that if the vessels are arriving at the terminal, and it remains open for business, customers demand that cargo be picked up. Truckers then have no option but to oblige, despite the fact that in many cases it is the trucker or trucking company that bears the cost of waiting for hours in line, he said.

Bader cited the example of Maher Terminals, which in 2013 subcontracted vessels to other terminals after problems with implementation of a new operating system caused extensive truck lines and forced drivers to wait for hours to get into the terminal.

The association, in its plan of action, which was delivered to an APMT representative at the meeting, said “the loss of productivity in the trucking community as a direct result of this cyber attack has been staggering and sustained.”

The association plan called for all the terminals in the port to create and maintain an “Emergency Action Plan” with clear guidelines for how they will deal with a catastrophic event, including a cyber or terrorist attack, power outages, and total computer shutdown.

“In the instance of a catastrophic event, where lives are at risk or levels of service cannot be maintained, the Port Authority of New York and New Jersey must order a shutdown of the affected terminal until acceptable service levels can be consistently restored,” the plan said.

The plan also said there “must be no detention or demurrage billed on any container” from the date of the catastrophic event until two weeks after “systems are back to normal and/or turn times consistently resume to pre-attack levels.”

The association said that if another catastrophic event occurs it would “file a petition with the Federal Maritime Commission to institute guidelines/regulations that would automatically set these actions into motion.”

Bader said he would raise the issue at next week's meeting of of the port’s Council on Port Performance, a gathering of key stakeholders that seeks to improve efficiency in the port.