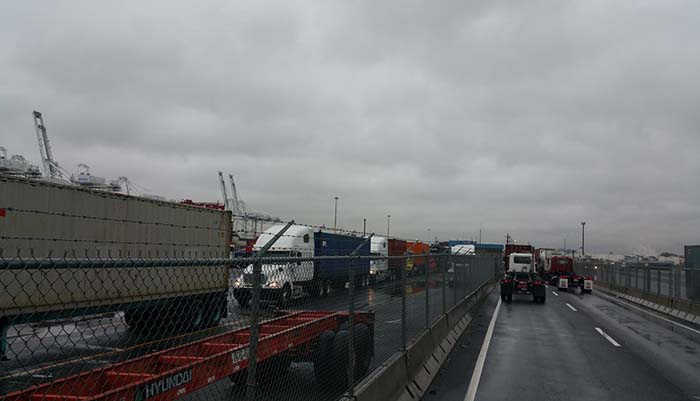 New York-New Jersey harbor truckers hope the new system will provide the information needed to make improvements that will help prevent long truck lines such as the one pictured.

The main trucker advocacy group at the Port of New York and New Jersey is preparing to launch a satellite-based system to compile data on truck turn times at the port’s five main terminals in an effort to prod terminals into reducing delays.

The Association of Bi-State Motor Carriers in recent weeks has tested the system with information from 800 to 900 trucks fitted with global positioning system devices. The data are used to measure queue times outside gates and the time that vehicles spend inside terminals.

Association officials hope the data will highlight concerns about the difficulties their drivers endure when taking containers in and out of the nation’s third-busiest port. Sporadic bouts of congestion and delays in recent years have routinely increased queue and turn time at some terminals to well above an hour on the best days, and often to several hours.

“It’s not about pointing fingers, it’s about improving efficiency,” said Lisa Yakomin, spokesperson for the association. “That’s all we are looking for. We are not looking to call people out … It’s a tool for our members.”

The initiative echoes those at other ports, in particular on the West Coast, where truckers enacted GPS-based systems three years ago and have found some terminal operators responsive to problems underscored by the data. Shippers have also paid to receive the data, finding it useful in planning their supply chain.

The Port of New York and New Jersey’s Council on Port Performance has discussed ways to reduce congestion and ease truck backups. The problem has become more critical as container volumes have surged and the port prepares to cope with the arrival of larger ships and the intense, short-duration stress on resources, labor, and traffic they bring.

A pilot program for an appointment system aimed at smoothing the arrival of trucks throughout the day rather than in bunches at certain periods was set to start Thursday, but was postponed for technical reasons. The start date has yet to be rescheduled. Two other council proposals, extended gate times and a port-wide chassis pool, have yet to come to fruition.

The trucking association’s system gathers data from member companies' GPS-based fleet tracking systems, which monitor each truck’s path through virtual “geofences” that mark the boundaries of the marine terminals and three near-dock chassis depots. The “fences” include the approach to the gates so the GPS catches the wait time before trucks enter the terminal.

The system documents the time at which each truck's GPS system passes through the “fences” on arrival and departure, and combines the information from all participating trucking companies into an aggregated average of the total turn time for each terminal.

Association members have for several years compiled a monthly evaluation of the wait times at each terminal, grading each from A to F based on the trucking companies’ perceptions. An A is given if there is “minimal” delay, a D goes for a wait of more than an hour and an F is awarded for an “unacceptable … prolonged” wait.

Those evaluations are published in the association newsletter and provided to terminals, some of which questioned their accuracy, Yakomin said.

“They still question it, because they say, ‘How do you know your members are giving a proper evaluation? What if they are angry at the terminal, and they just want to give them an F every month?’” Yakomin said. She noted that the grading system has checks in place to remove anomalies. “We approach the terminal. We say, ‘Listen — this is our data. Let’s talk about it,’ if we see the service drop below an acceptable level. They (the terminals) are members. We reach out and talk to them.”

She said the GPS data so far has matched the members’ evaluations, demonstrating their accuracy. However, although the association believes that all terminals compile their own figures, only one — Global Container Terminals, the operator of the Bayonne and Staten Island terminals — has provided them for comparison with the association evaluations.

On the West Coast, turn times at the 13 terminals of the ports of Long Beach and Los Angeles are calculated through two systems: PierPass, which is compiled for the terminals and measures only the time spent within their boundaries, and a system created for the Harbor Trucking Association. Both systems look at queue times as well as the time spent inside the terminal.

Weston LaBar, executive director of the Harbor Trucking Association, said the organization’s GPS-based system has had a significant impact since its launch three years ago. The system initially provided a monthly report on turn times. It was enhanced six months ago to provide real-time data. It’s now used by beneficial cargo owners, trucking companies, terminals, government agencies, and others, LaBar said.

Aside from turn-time averages, the system provides trends and allows trucking companies to track their own vehicles and compare their turn times to the averages, LaBar said.

“We felt that the individual terminals were routinely under-reporting what they felt the turn times were,” LaBar said. “It allowed us to show what the problems were. And what’s been really great is we have had some marine terminals that have really stepped up to the plate. They have taken a lot of ownership of this data, and they have put a lot of efficiencies in place that have helped them continue to drive down the turn times pretty consistently.”