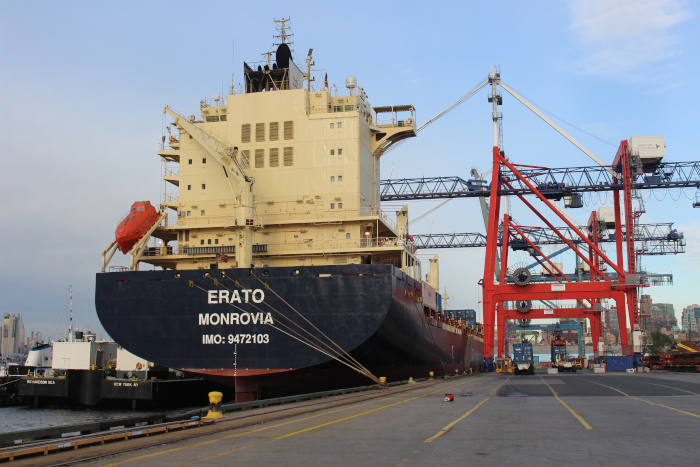 The new International Longshoremen's Association (ILA) contract in the Port of New York and New Jersey reduces the amount that longshoremen are paid if they are scheduled on a Monday shift but the vessel's delay means they can't work. Photo credit: Hugh R. Morley.

The Port of New York and New Jersey is implementing a new policy to make more efficient use of longshoremen to load and unload vessels at the weekend, in a move required at most East and Gulf coast ports by the union master contract signed last year.

The policy, negotiated in the contract between the New York Shipping Association (NYSA) and the International Longshoremen’s Association (ILA), allows longshoremen to be hired for Sunday and Monday shifts on a Saturday, instead of a Friday, as happens at present. A future policy will allow hiring on Sunday for vessels arriving Monday.

Employers pushed for the change to make better use of weekend labor and cut the cost of paying longshoremen for standing idle when vessels don’t arrive on schedule. Terminals hire the labor, but the costs are generally passed on to ocean carriers. One terminal source close to the master contract negotiations said those payments cost some ocean carriers millions of dollars a year.

The productivity push comes as New York-New Jersey, like ports across North America, is facing increased competition and growing stress on resources, as cargo volumes rise and vessels sizes increase. The acceptance of the new policy by the ILA appears to reflect the union’s effort to head off automation in the port by showing that union members can work as efficiently as machines.

Loaded cargo volumes through New York-New Jersey increased 6.5 percent in 2018, outpacing the 5 percent overall growth rate on the East Coast, but lagging behind the 8.1 percent rise in the Gulf Coast, according to PIERS, a JOC.com sister product within IHS Markit.

The revamped weekend hiring policy is designed to prevent the not-uncommon situation of a marine terminal hiring longshoremen on Friday to work a vessel on Sunday or Monday, but having no work for them because the vessel’s arrival is delayed. In that scenario, the union contract in the past required that a longshoreman hired to work at a particular start time must be paid for four hours at regular pay whether the ship arrives or not. The current contract, which took effect Oct. 1, requires the longshoremen be paid four hours if that situation occurs on a weekend day, but just two hours for Mondays. Both are regular pay, which ranges from $20 an hour to $35 an hour depending on the employee’s length of tenure.

By shifting to hiring on a Saturday for work on Sunday or Monday, the policy “moves the hiring closer to the activity,” said John Nardi, president of the NYSA. “So you have more confidence and accuracy in your labor hiring that the ships will show up when you have hired labor for them.”

The issue is particularly sensitive in the current era of poor schedule reliability. A recent study by SeaIntelligence Maritime Analysis, for example, found that 36.4 percent of vessels from Asia to the East Coast arrived on time in March, a 5 percent improvement on the month before.

In New York-New Jersey, employers and the union are still putting the final touches on the policy and expect to decide this week whether to implement it over the summer, or wait to do so in autumn, Nardi said. Once Saturday hiring is implemented, the contract requires that the two sides work on a second policy allowing longshoremen to be hired Sunday for a vessel arriving Monday.

Almost all East and Gulf coast ports will make — or have made — some kind of change to better handle labor in situations where vessels don’t arrive on schedule, due to guidelines in the master contract struck by the United States Maritime Alliance (USMX) and ILA, said David F. Adam, CEO and chairman of USMX. The six-year pact was agreed to in June 2018 and backed by the ILA membership on Sept. 6.

The master contract gives a general framework for the weekend hiring changes, which seek “flexibility for vessel non-arrival.” The guidelines allow employers to change the time that longshoremen will start to adjust for late arrival of vessels, but the guidelines also require them to give the longshoremen at least two hours notice for such changes. The impact of the guidelines, however, will vary from port to port, depending on the flexibility and design of their existing policy, Adams said.

“Nobody wants labor sitting idle,” Adam said of the employers’ desire to change weekend hiring policies. “In the end, it’s a cost savings, and it’s a productivity enhancer that results in less standby costs to carriers.” Depending on the size of a ship and the gangs hired, a delayed vessel could leave as many as 100 longshoremen getting paid but with no work to do, Adam said.

In Houston, Chelsea Egmon, vice president for labor relations at the West Gulf Maritime Association, said the port had not changed its weekend hiring process because it already hired on Saturday for Sunday and Monday shifts. However, in response to the master contract, the port instituted a new policy that allowed it to change the time longshoremen start work under certain circumstances.

In the past, a shift for longshoremen hired for a 10 p.m. start would have to be canceled by 6 p.m. if the vessel was not going to arrive on time, she said. A cancellation after 6 p.m. would require the employer to pay workers six hours at overtime pay rates of one-and-a-half times the regular rate and two hours at double-time pay rates, Egmon said.

Under the new contract, the 10 p.m. shift can be canceled up to 8 p.m., or the start time moved to midnight, she said. If it’s canceled after 8 p.m. the employer has to pay the longshoremen three hours at overtime pay and one hour at double-time, she sad.

“It definitely does give some benefits to stevedores,” she said. “They need to be able to have at least some flexibility.”

The New York-New Jersey policy is the second key element in the six-year NYSA-ILA contract signed last autumn, which aims to improve labor efficiency as the port continues to host increasingly large vessels that put more pressure on port resources.

Employers are also in the process of setting up a new, more rigorous gang system in which each gang — especially the foreman — is responsible for increasing their productivity each year by about one move an hour. Teams that don’t meet their moves-per-hour goals will face closer scrutiny as to why, and will get help to improve. In extreme cases, workers or entire gangs that are perceived to be not contributing to the effort to reach the goals could be removed from the rotation and the amount of hours they work reduced.

For the union, the efficiency measures are part of its effort to demonstrate that with productivity improvement union members can be as efficient as automated terminals. The ILA-USMX master contract included concessions that prohibited ports from implementing fully automated terminals, those in which the vast majority of dock-to-yard and yard operations are carried out by unmanned equipment.

ILA president Harold J. Daggett in February pledged that the membership would strive to hit 30 container moves an hour, saying his members would have a production rate “far better than any robot or equipment would have.”