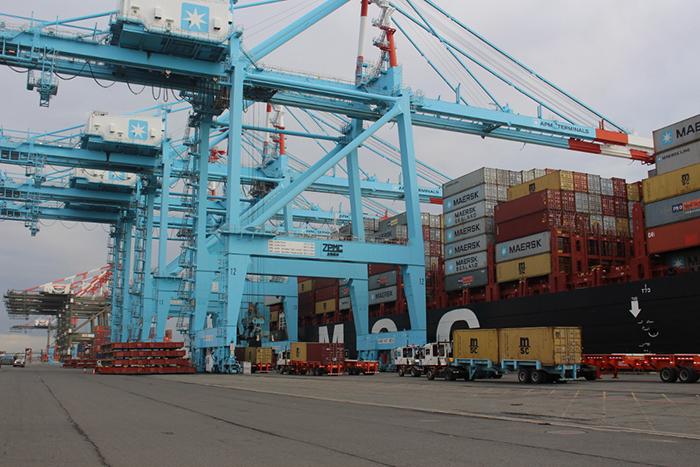 The APM Terminals facility in Elizabeth, New Jersey, is advancing in its recovery from the cyber attack on the Maersk Group.

The APM Terminals facility at Port of New York and New Jersey — challenged by long truck lines after a June 27 cyber attack on parent company Maersk Group damaged the terminal’s phone, email and computer systems — said it hopes to be fully operational by Wednesday.

Even when operations return to normal, however, shippers may still have to wait for their cargo as the terminal works through a backlog of containers accrued during the three days that the terminal was closed to trucks immediately after the attack but vessels continued to arrive and discharge boxes.

Truckers said service at the Elizabeth, New Jersey, terminal Monday was improved from last week, when the line outside stretched for a mile, with hundreds of trucks in line — some of which waited for six hours before getting inside the gate.

“It’s getting back to normal,” said Tom Adamski, agent for First Coast Logistics and representative of the New Jersey Motor Truck Association's intermodal council, who said the line of trucks outside the terminal was about half the 800 or so he saw outside the terminal late last week. “The line is still somewhat long. But once you get inside they are turning the boxes.”

The terminal shut down for three days on June 27 after the attack paralyzed Maersk Group’s computers and left customers of the world’s largest shipping line anxious for answers and wondering how long the disruption will last. The attack crippled the Maersk Line, Damco, and APM Terminals units, but the carrier said Monday that it was “servicing both import and export customers close to normally.”

Richard Carthas, senior director of operations for the Elizabeth terminal, said its rail and vessel operations were operating at full capacity Monday, and the truck gates operated at about 70 percent of capacity.

The terminal’s main gate, with 22 lanes, handled container arrivals and departures with full computer capability, he said. But a second gate, whose eight lanes are mainly used to accept empty containers, was closed, due to continuing computer connectivity issues, Carthas said.

“Right now, we are working on getting our empties gate opened up,” he said, in the first comments by an executive of the Elizabeth terminal since the attack. “That is one element that is outstanding. We are looking to get that up and running by Wednesday. At that point, we believe our gates in operation in effect would be almost back to 100 percent. That’s the target right now.”

The terminal’s shutdown and recovery gave the operator, and the array of truckers, shippers and other port stakeholders that rely on its smooth operation, a sudden grim lesson on the chaos and swift supply chain disruption that can be wreaked without warning by a cyber attack, and the difficult task of maintaining the chain and returning cargo handling operations to normality.

When the Elizabeth terminal reopened, employees had to document the arrival and departure of containers manually, writing box numbers and their positions in the yard on paper, Carthas said. The attack severely impaired customer communications because the email didn’t work, nor did the terminal phone system, a voice-over internet protocol system that relied upon the internet to function. Employees had to use personal emails and cell phones to maintain communication links, he said.

Meanwhile, truckers were increasingly frustrated at the long waits to get in the terminal gates. They were unable to find out whether a particular container they needed to pick up was available because the company website was down. In some cases, drivers waited in line for hours, arriving at the front of the line only to find that the box wasn’t available.

Carthas said the terminal, rather than shut down entirely until all its systems were restored to full operation, opted to open its doors sooner.

“We had this impact,” he said. “But we wanted to service the community. And even though we had to do it manually, although it was a little slower than it normally was, the alternative was not opening at all. And we didn’t find that that was fair to the customer base and our ocean carrier customers, particularly truckers.”

Carthas said he first learned of the attack just after 7 a.m. June 27, as he was going through emails at the terminal, when Maersk issued an alert demanding all company computers shut down immediately, saying that “there is a potential of a cyber attack underway.”

“Five or ten minutes after that, our gate computers literally shut down,” Carthas said.

Within an hour, it was clear that the attack would have a “significant impact” on the terminal’s computer system, he said. And after another two hours, the terminal realized that it would have to shut down.

Part of the problem was that the virus, now thought to be of a strain known as “Not Petya,” rendered much of the computer system inoperable, he said. In addition, Maersk’s IT team feared that if company computers were restarted in a widespread fashion, the virus would spread through the system, he said.

Even with the terminal gates closed, however, vessels continued to arrive, and deposit cargo — forcing stevedores and terminal staff to return to an era in which there were no computers, or centralized Navis terminal control system, Carthas said.

“There was a little bit of a return to the olden days, of paper and pencil in regards to keeping inventories and also processing people in and out of the gate,” he said. “Fortunately, we had some inventory records” of containers already in the terminal, he added. “Otherwise, anything arriving after that time, meaning ship arrivals, truck arrivals and departures, were all done manually. People had to keep paper logs.” That information was then transferred to “a basic Excel spreadsheet  maintained to track the updates,” he said.

Meanwhile, the terminal’s management and stevedores worked long hours to keep the system going, with some working 12 to 18 hours a day, he said.

Since reopening, the terminal has extended its closing time from 3.30 p.m. to 7 p.m., and opened Saturday, to help customers get cargo, Carthas said. On Friday, the terminal handled 1,800 import containers and 400 exports, slightly more than a typical day, and on Saturday it handled 400 empties and 760 import loads, he said.

The terminal’s ability to continue operating relied on all of the parties involved doing their part, he said.

“We view this as an attack, not only on our organization, but really on the port community,” he said. “Because if you look at the people that have been impacted by it — the truckers have been impacted, the BCOs (beneficial cargo owners). The port authority has had to help us  … It really has impacted the entire community. And I am glad to see we are all working together to get the best results out of a difficult situation.”