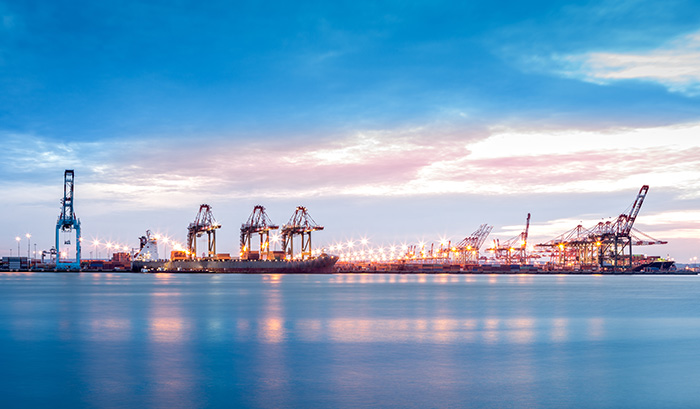 The International Longshoremen’s Association has pledged to bring terminal productivity up to at least 30 crane moves per hour. Photo credit: Shutterstock.com.

Squeezed by rising vessel and cargo volumes and facing a slowdown in productivity growth, the Port of New York and New Jersey is adopting a new, more rigorous longshore gang system to kick-start a drive to reach a portwide productivity of at least 30 crane moves an hour.

Under the new system, part of a contract signed Sept. 25 between the International Longshoremen’s Association (ILA) and the New York Shipping Association (NYSA), each gang — especially the foreman — is responsible for increasing their productivity each year by about one move an hour. Teams that don’t meet their moves-per-hour goals will face closer scrutiny as to why and will get help to improve. In extreme cases, workers or entire gangs that are perceived to be not contributing to the effort to reach the goals could be removed from the rotation and the amount of hours they work reduced.

Employers say the program, which is in the early stages of implementation, is by far the most structured effort undertaken in the port to improve longshore productivity and is aimed in part at addressing the stress on resources from growing cargo volumes and ship sizes.

Loaded cargo through New York-New Jersey increased by 6.5 percent in 2018 and surged by 14 percent in the last quarter over the same period in 2017, according to data from PIERS, a sister product to JOC.com within IHS Markit. The increase particularly affected APM Terminals, which has suffered elevated turn times and rail dock dwell times since October, after cargo through the terminal increased in the final quarter by 26 percent of the previous quarter.

The program echoes a pledge made last month by ILA president Harold J. Daggett, who signed the New York-New Jersey agreement, to improve productivity and reach a production rate that is “far better than any robot or equipment would” generate.

He told the annual dinner of the New York/New Jersey Foreign Freight Forwarders & Brokers association in New York that since signing the six-year master contract on Sept. 6, he had “repeatedly told [ILA] members that we have to make good on our pledge to increase container moves to over 30 moves an hour, and maybe even more in some ports.”

Employers say the union is keenly aware of the advances of automation and believes that the best way to head it off is to show that longshoremen are as productive as technology. The average speed of work gangs in New York-New Jersey at present is 28 crane moves per hour, but the productivity of individual terminals varies from 25 to 32 moves an hour, according to port officials.

Past ILA contracts stated that improving productivity was a goal, but there was no mechanism for reaching that goal, John Nardi, president of the NYSA, told JOC.com. “There were words that said we were going to commit to do 30 moves an hour,” he said, but there were “no defined corrective actions against it, no teeth.”

Since the NYSA and employers signed the last contract in 2013, productivity in the port had improved every year, he said. But in 2018, productivity had “leveled out and even slipped in some cases,” prompting terminal operator employers to seek out a strategy to reverse that trend and meet the changing demands of the industry, Nardi said.

“Now we’re faced with larger ships and higher move counts, so it is essential to turn these vessels as fast as possible, so they can maintain their schedule [and] continue calling” at New York-New Jersey, he said. “The productivity improvement process is a structured way to achieve the improvement.”

Employers wanted to create a process in which the gang, and the foreman in particular, not only are responsible for their team’s productivity, but have the space, resources, and incentive to come up with solutions, Nardi said.

“We put the onus on the foreman to say, ‘Okay, what is the problem? Is it the crane operator? Is it the people in the gang that not doing what they're supposed to do? Is it the drivers not supporting the gang? Or is it an absentee problem?’” Nardi said. In addition, the process also looks at potential issues in training and the employer’s equipment or systems, which would then also need to be addressed.

The program, which in the contract is referred to as a “productivity improvement process,” focuses on the activities of work gangs whose responsibilities stretch from removing containers from vessels to placing them on the stack. Gangs typically contain about 18 workers, including checkers, truck drivers, and sometimes lashers.

A key element of the process is the “cohesiveness of the gang unit,” the contract states. To compensate the foremen for the added responsibility, the contract awards them additional salary, $1 per hour more than the highest paid person under their supervision.

Goals for each gang are set each year by the marine terminal operator and the union based on the gang’s performance in the previous 12 months. Both the gangs and the terminal operator are responsible for maintaining records of their productivity on each vessel “including specific details about problems encountered,” according to the contract.

Teams that don’t reach the goal face a series of performance ratings, each of which brings closer scrutiny. However, the process takes into account factors beyond the gang’s control that could affect productivity, such as severe weather and power outages.

Gangs that meet their goal face no review, but those that don’t meet it for 90 days are required to meet with ILA and terminal operators to discuss productivity. The “hatch boss,” or gang foreman, will meet with the gang weekly and is expected to take steps to improve the gang’s performance.

Permalink Submitted by engineer_326@ya... on Mar 7, 2019 4:24PM EST
At this point it's a "I'll believe it when I see it" sort of situation. This does sound most promising of recent discussion on this topic, though. Maybe lost business is finally getting to the ILA.

We aren't losing any business