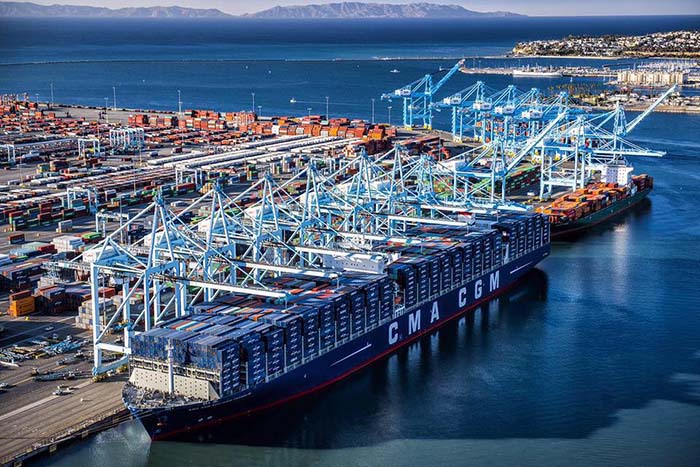 Mega-ships such as the CMA CGM Benjamin Franklin, pictured at the Port of Los Angeles, will become a more regular feature at US ports, which must cope with the unique operational challenges such ships present.

HUNTINGTON BEACH, California — The more than decade-long comprehensive effort mounted by terminal operators in Los Angeles-Long Beach to efficiently work the largest mega-ships shows other US ports have their work cut out for them, a Los Angeles port terminal operator said Monday.

There is no single strategy that can produce the level of efficiency demanded by beneficial cargo owners as volumes approach 50,000 laden import containers a week, according to Alan McCorkle, vice president of Yusen Terminals in Los Angeles.

“It has to be an all-of-the-above strategy,” McCorkle told the Footwear Trade Distribution and Customs conference Monday, in Huntington Beach, California.

Los Angeles-Long Beach terminals extended their gate hours, consolidated import loads into special stacks for free-flow operations and welcomed new technology that gives truckers visibility into delays at the gates and in the yards. They also rolled out trucker appointment systems and joined supply-chain optimization teams formed by the port authorities.

Freight forwarders, customs brokers and non-vessel-operating common carriers meeting in Coronado, California, over the weekend heard a similar story from other West Coast port representatives. Each segment of the marine terminal — vessel, yard and gate — presents unique challenges in delivering productivity, with the receipt and delivery of laden import containers being the major driver of congestion at most terminals. It is the responsibility of the ports, as neutral facilitators, to form working groups focused on finding operational efficiencies in which all stakeholders can describe their particular problems and share in the development of portwide solutions.

“Efficiency is doable, but difficult to achieve because we need consensus,” Marcel van Dijk, marketing manager at the Port of Los Angeles, told the annual Wesccon meeting in Coronado.

If all segments of the port supply chain are to work more efficiently, the ports need information from each sector, including vessel manifests, containers to be loaded at on-dock intermodal rail yards, gate productivity status and so forth, in a way that can be shared with other stakeholders, he said.

As the largest US port complex, the Southern California ports have served as a laboratory for creative measures to cope with volumes that have risen to more than 15 million 20-foot-equivalent units. Some of these ideas have spread to other ports and could eventually be needed at all major gateways.

Extending gate hours is the quickest and most effective way to increase capacity in a port complex. Los Angeles-Long Beach through PierPass Inc., which terminal operators established in 2005, increased terminal capacity by about 40 percent on the existing footprint simply by adding four weeknight shifts and one weekend shift each week. Most port users agree the complex's terminals could not handle the 30,000 to 40,000 daily truck visits to the harbor in just one shift a day, five days each week.

However, it wasn’t as simple as turning on a light switch. While PierPass immediately relieved daytime gate pressure by shifting about 50 percent of all truck traffic to nights and weekends, and that percentage has held constant for the past 10 years, the program continues to attract criticism.

BCOs, truckers and freight intermediaries contend the traffic mitigation fee on peak-daytime traffic, which is used to reimburse terminals for their off-peak night and weekend operations, lacks transparency.

Detractors question if the fee, which is now $140.98 per 40-foot container, is exactly what is needed to cover the labor, equipment and management costs of running the extended gates, or if it has become a profit center for the terminals. “It needs to be transparent,” said Robert Loya, director at transporter California Multimodal.

A number of US ports are experiencing congestion during their normal 8 a.m. to 5 p.m., Monday through Friday gates, but few have developed formal programs of extended gates because of the costs involved.

Oakland this summer became the second US port with a formal extended-gate program when Oakland International Container Terminal launched Monday-through-Thursday gates, with a $30 fee on all container moves, no matter what time of day the container is moved.

Truckers say that a full menu of extended gates may not be needed until Seattle-Tacoma volumes reach a critical mass. For example, if marine terminals would work through the lunch hour, efficiency would improve, said Matt Hodson, vice president of operations at Summit NW. Considering the time taken to shut the gates, reopen them and get back to full operations, one and one-half to two hours of productive time is lost when a terminal shuts down for lunch, he said.

Another portwide program in Los Angeles-Long Beach that is improving cargo fluidity is the neutral chassis pool that the three largest pool operators — Direct ChassisLink, TRAC Intermodal and Flexi-Van Leasing — worked with the ports to unveil on March 1, 2015. “The pool of pools has been a good thing for our industry,” McCorkle said. In most instances, the neutral-chassis arrangement has eliminated split moves in which the trucker used to deliver the container to one location and then had to return the chassis to another.

Like PierPass, the pool of pools has experienced operational issues, such as a spate of bad-order chassis and equipment dislocations, which have been aggravated by the Hanjin bankruptcy, but it appears to be a fixture now in Southern California, and the only question is how it can be improved.

Other ports are considering the formation of neutral chassis pools as well. New York-New Jersey has actually been working on its version for more than a year, but it has been hung up on a longshore jurisdictional dispute involving maintenance and repair. Oakland and the Northwest Seaport Alliance are also looking into the possibility of forming neutral chassis pools. The key in all cases is to have interoperable chassis in order to avoid split moves.

“Appointments will be needed, but in order to be effective, it has to be the right system,” said McCorkle, who is working with the Harbor Trucking Association to roll out an appointment system at Yusen Terminals. An appointment system must be developed with truckers to address their needs, rather than being imposed on truckers to meet only the needs of the terminal operator, he said.

Ron Brown, maritime marketing and commodities representative at the Port of Oakland, said OICT, which handles about 70 percent of the port’s container volume, has an appointment system. Some terminal operators at various ports have floated the idea of appointment systems to add predictability to their daily traffic flows, but have run into opposition from truckers, who usually complain that the windows for keeping appointments are too narrow given the vagaries of urban traffic.

Terminals in Southern California in recent years implemented measures that have attracted support from BCOs and truckers and now have a proven track record of fostering productivity. SSA Marine, which operates three terminals in Long Beach, for the past decade has maintained dray-off operations in which laden import containers are trucked to off-dock yards as soon as they are discharged from the vessel. Kirk Wargo, Pier A yard manager, said that in a port complex where the average truck visit time is more than an hour, SSA is regularly achieving turn times of about 15 minutes. Other terminals that intend to engage in these dray-offs must gain access to off-dock yards in a port complex where land is scarce and the cost of real estate is high.

Some terminals offer a version of this service by free-flowing cargo, also known as peel-off.

Those terminals work with truckers who agree to have their containers placed into a special pile. The terminal may also offer a special gate for the truckers. Drivers enter the facility and proceed directly to the designated container stack, and the equipment operator then peels off the top container and delivers it to the trucker, who is followed immediately by another driver and the process repeats. The only caveat in free-flowing containers is that the driver can’t choose a particular container but must accept the next available box, Wargo said. Stoker said the Northwest Seaport Alliance is beginning to offer peel-offs.

Terminals that close down a section of the facility because of congestion or heightened activity, such as when a vessel is being unloaded and laden import containers are being delivered to that location, elicit disapproval from BCOs. These shutdowns can last an entire shift and could mean the difference between receiving a container during the allowable free time and paying late charges, known as demurrage, Jeff Solomon, director of operations at SG Companies, told the footwear distributors conference.

McCorkle said Yusen will never shut down a section of its terminal for two consecutive shifts for the discharge of laden imports, and if the one-shift shutdown results in a demurrage issue, the company should tell the terminal operator. “We will make it good,” he said.

The latest measures that have been introduced at the ports of Los Angeles, Long Beach and Oakland, and will soon be implemented at the Northwest Seaport Alliance and maybe other ports, is the use of technology to give truckers real-time visibility to gate queues and delays throughout the terminals. The technologies, which differ somewhat, include the use of GPS tracking, smart phones or bluetooth. In addition to providing real-time visibility, the technologies provide truckers and terminals with data accumulated week by week and month by month that can be used to uncover systemic problems they can then address.

West Coast ports regularly handle vessels with capacities up to 14,000 TEUs, and after testing the 18,000-TEU CMA CGM Benjamin Franklin earlier this year on pilot runs, the ports anticipate they will begin receiving these mega-ships on a regular basis in another year or two. With the opening of the third set of locks at the Panama Canal in June, East Coast ports are already receiving vessels up to 10,000 TEUs and their size is likely to grow, as vessels of 14,000 TEUs can transit the expanded canal.

Truckers and BCOs say the creative programs that have been underway in Los Angeles-Long Beach are gradually being adopted by other ports and helping to relieve congestion, but some of these programs will have to be expanded or new measures will be necessary. Nevertheless, they are confident that terminal operators will do what is necessary. “Despite all of this, we move cargo,” Loya said.