Impacts of mega-ships on US ports spread unevenly

Impacts of mega-ships on US ports spread unevenly 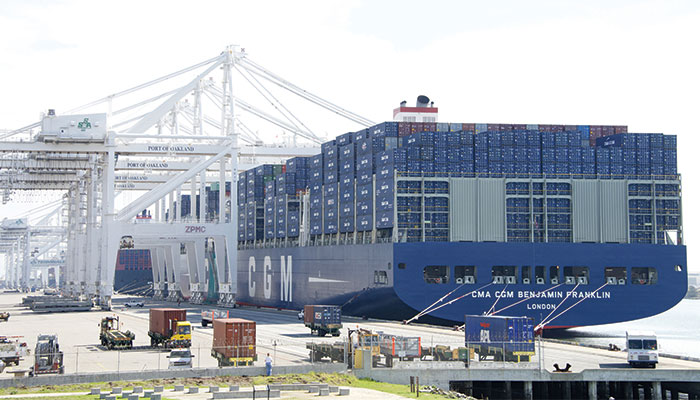 Mega-ships are challenging nearly every aspect of port operations, from labor and equipment availability to the layout of the ports themselves.

Multiple calls by large vessels on certain days of the week, known as vessel bunching, are straining the equipment and labor resources at US ports and presenting a growing threat to productivity at container terminals, according to a JOC.com study.

Although mega-ships in and of themselves have an impact on terminal resources and productivity, “the bunching will be causing more significant challenges” in stressing the ability of ship-to-shore cranes, labor and container yard equipment to handle the cargo surges, according to Andy Lane, a partner with CTI Consultancy, who produced the study.

Los Angeles-Long Beach has felt the impact of mega-ship bunching for several years because calls by multiple vessels capable of carrying 8,000 to 14,000 twenty-foot-equivalent units in the same week are a fact of life. June’s completion of the third set of locks at the Panama Canal, however, is allowing larger mega-ships to call at New York-New Jersey and other East Coast ports.

Larger ports handle dozens of vessel services each week. At some ports, vessel calls peak on two or three days of the week due to the rotation of port calls from Asia, Europe, and Latin America. This is especially true when a port complex such as Los Angeles-Long Beach or New York-New Jersey is the first inbound call for these services because of their large local populations.

Vessel bunching is straining the ability of the ports and their terminal operators to muster sufficient labor and equipment on peak days, Lane said. The bunching effect can last for two or three days because of the increasing size of the cargo surges. “In both Los Angeles-Long Beach and New York-New Jersey, we witness huge productivity losses during and immediately after the highest peaks of demand,” he said. It should be noted that productivity is measured against the vessel, in the yard, and at the gates, so the impact of vessel bunching is felt throughout the marine terminal.

The ever-increasing size of the vessels and their cargo surges compounds the impact of multiple vessel calls on a single day. This is a particular problem for first calls in Southern California and New York-New Jersey, where a larger percentage of the vessel contents is worked than at subsequent ports on the rotations.

Lane refers to these cargo surges as “large batches” of containers, and they occur mostly in the Asia-US trades where the mega-ships are deployed. “For Los Angeles, 86 percent of total demand is in batches of 3,000 (container) moves per call or more, which is extreme by global as well as US standards,” he said.

Over the past couple of years in Los Angeles-Long Beach, container moves per vessel call on some routes have been consistently above 5,000. “For the other major US ports, the majority of total demand is delivered in batches of between 1,000 and 3,000 moves per call,” he said.

The challenges of measuring port productivity

Measuring the impact of big-vessel calls on big ports is complicated by the fact that the cargo surges are spread out over the several days that each vessel is in port. Ports that are second and third in rotation on a weekly service experience a diminishing cargo surge, and often can complete work on the vessel in a single shift using two cranes.

By contrast, a 14,000-TEU vessel calling in Los Angeles-Long Beach and discharging and reloading 80 percent or more of the containers will be at berth three to five days, and will be worked on two eight-hour shifts each day using five or more cranes.

The difference in the types of ports — first call vs. second or third call — makes it difficult to compare vessel berth productivity across all major US ports. The size of the vessels, the percentage of each vessel normally worked, and the willingness of each shipping line to pay for overtime work in order to expedite loading must be factored into the numbers, and the numbers can vary from call to call.

For example, if a vessel arrives at berth in the middle of a night shift, the carrier may not want work to begin until 8 a.m. the next day, said Ed DeNike, chief operating officer of SSA Marine, which operates three container terminals in Long Beach. Longshoremen called to work half a shift are, by contract, paid for the entire shift.

Big ships, with containers stowed 10 rows or more high on deck, add a complicating factor when measuring vessel-at-berth productivity, and these mega-ships are creating huge demands on certain types of labor. When work begins on a big ship with containers stacked 10 rows high on deck, DeNike said, crane productivity starts with a bang because the initial moves are the easiest for the crane operator to perform — lifting a container from the top of the row and lowering it to a waiting yard tractor.

When all of the containers have been loaded onto the ship below deck and operations shift to completion of the loading process on the deck, the complexity is even greater, especially on a mega-vessel, so the time required to perform those final moves increases.

The big ships with containers stacked high on deck present another challenge, and cost, for the terminal operator. That function involves lashing the containers with heavy bars to secure the containers for the voyage. The lashing of containers adds time to the loading process and, with today’s big ships, calls for the use of many more lashers. DeNike said the largest ships may require 40 to 50 lashers, compared with a half-dozen when ships were much smaller.

Lashing has become such an important skill that in Asia, where most of the mega-ships begin their voyages to the United States and Europe, some ports have lashing companies. The stevedoring company will subcontract this work to companies that perform only lashing work. They have experienced workers trained in that skill, DeNike said.

Although big ships challenge productivity, they also contribute to improved productivity in certain areas. When aggregating berth productivity numbers across a port, those that regularly have the highest percentage of their calls by large vessels normally score highest in berth productivity. That’s because a big ship will be worked consistently over two or more shifts with four or more cranes, so the total number of containers discharged from and loaded onto the vessel each hour will be large.

By contrast, a port with smaller container exchanges from smaller vessels will work only one or two cranes against the ship. “Larger call sizes generate more productivity because they demand the use of more cranes,” said Larry Nye, head of port planning at infrastructure and port engineering consultant Moffatt & Nichol. Because the vessel will be in port for three days or more, and will be worked on two shifts each day, the terminal operator can prepare by reserving sufficient labor and equipment to handle these weekly calls.

However, in a port complex such as Los Angeles-Long Beach, which has 13 container terminals and dozens of ship-to-shore cranes as well as dozens of yard cranes, the demands on labor, especially skilled labor, can be crippling. Operating ship-to-shore cranes and yard cranes requires the use of experienced, skilled workers, so vessel bunching on certain days of the week places extra demands on the supply of skilled labor, DeNike explained.

This complex environment becomes even more complex when the number of terminals in a port is considered. In ports such as Los Angeles-Long Beach and New York-New Jersey, which have multiple container terminals operated by different stevedoring companies, some of which have a corporate affiliation with the shipping line that calls at the facility, physical resources can go unused or underutilized on some days, compared with a general-user facility where a number of lines call and the terminal is in constant operation.

The implication is that terminal consolidation may be necessary at some US ports, but this may not be physically or commercially possible, given the existing layout and location of the terminals, Nye said. In some instances, such as Oakland, three former 100-acre adjacent terminals operated by three companies were combined into one, more efficient, 300-acre facility. It worked because the terminals were adjacent, and the interests involved in two of the facilities agreed to sell their operations to SSA.

Los Angeles-Long Beach has been undergoing terminal consolidation for the past 20 years, and is now down to 13 container terminals, but given the spread-out geography of the two ports and corporate affiliations of some terminal operators and shipping lines, further consolidation will be difficult, Nye said.

Given all of the variables involving bigger ships operated by larger vessel-sharing alliances generating huge cargo surges with growing vessel bunching each week, it’s safe to conclude that the complexity of terminal operations will increase further in the coming years, and the impact of these developments could spread beyond Los Angeles-Long Beach and New York-New Jersey.