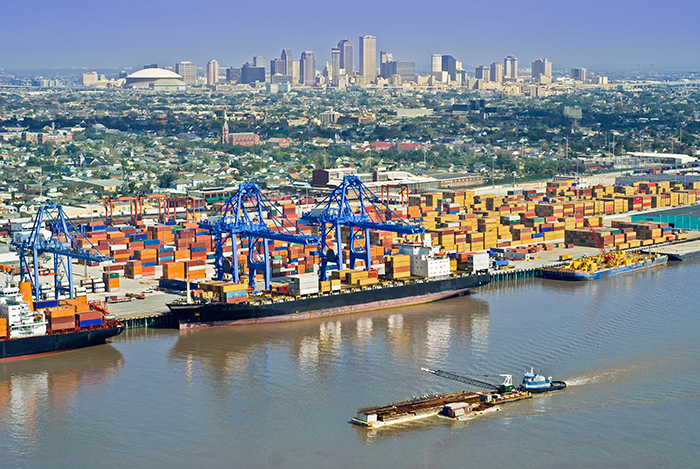 With the Port of New Orleans riding a double-digit increase in imports, terminal operator Ports America will invest $66.5 million to improve its handling of larger vessels and is on deck to develop a potential separate $300 million terminal that would double the port’s capacity.

Upgrades required in the 50-year lease with Ports America — which operates the port’s main container terminal Napoleon Avenue and a break bulk terminal that also handles containers, Nashville Avenue Terminal — would in the short term improve cargo efficiency and maintain the current maximum ship size of 10,000 TEU, the port said. In the longer term, a possible new terminal — and a planned dredging project to 50 feet — could enable calls from 12,000-TEU or larger ships and double the port’s container capacity.

The deal requires Ports America to invest in infrastructure and equipment, including up to four 100-foot gauge container cranes at the Napoleon Avenue container terminal. The port expects improvements to the terminal — which has a capacity of 840,000 TEU and space to increase to 1.5 million TEU — to be completed in 24 to 30 months.

The terminal operator could also increase container capacity at other New Orleans locations, including the development of a new terminal, if the port and Ports America “determine an expansion project is feasible at a new location,” the port’s release said. The port hopes the new terminal, with a capacity of 1.5 million TEU, will “target” vessels of 12,000 TEU or larger, with the first new berth up and running in five to seven years. The deal also gives Ports America the right to develop a container yard, chassis depot, and intermodal container transfer facility.

The figures helped push the Port of New Orleans’ share of loaded imports cargo on the Gulf Coast from 7.2 percent in 2017 to 7.6 percent in 2018. But the port’s share of the coastal loaded cargo market fell from 13.6 percent to 12.6 percent, the figures show.

Napoleon Avenue terminal, with capacity of 840,000 TEU, has two berths totaling 2,000 feet and a depth of 45 feet, according to the port's website. Nashville Avenue, with a single container berth, handles primarily project cargo. The port in 2017 handled 406,420 loaded TEU, according to PIERS, and the port’s resin exports are expected to grow exponentially over the next few years as the industry around it does.

The port in January hired a consultant to study the development of a second container terminal that would be 15 miles downstream from the Napoleon Avenue container terminal to accommodate the port's 4.5 percent compound annual growth rate over the last decade by handling larger ships and providing more expansion space.

New Orleans officials have long been interested in a container terminal downriver from the city, which is 100 miles up from the river’s delta. The Napoleon terminal, on former breakbulk wharves and rail yards, has undergone several expansions but is hemmed in by city neighborhoods. It also lies upstream from a pair of bridges that restrict ships’ vertical clearance to as little as 153 feet during periods of extreme high water each spring. The air-draft restrictions sometimes force carriers to switch to lower-clearance vessels.

The port also is undergoing a series of upgrades. The US Army Corp of Engineers has signed a project to deepen the ship channel to 50 feet. And the port is working with New Orleans Public Belt Railroad to increase its intermodal volume — at present only 11 percent of the port’s containerized cargo goes by rail — through the use of the public belt rail and six Class 1 railroads that connect to the port.

US Offshore Wind: Where Is the Market Heading?
Learn how IFP Corp uses technology to improve operational efficiency and improve margins
END_OF_DOCUMENT_TOKEN_TO_BE_REPLACED

The US-China Trade War: Where Do We Go From Here?
END_OF_DOCUMENT_TOKEN_TO_BE_REPLACED