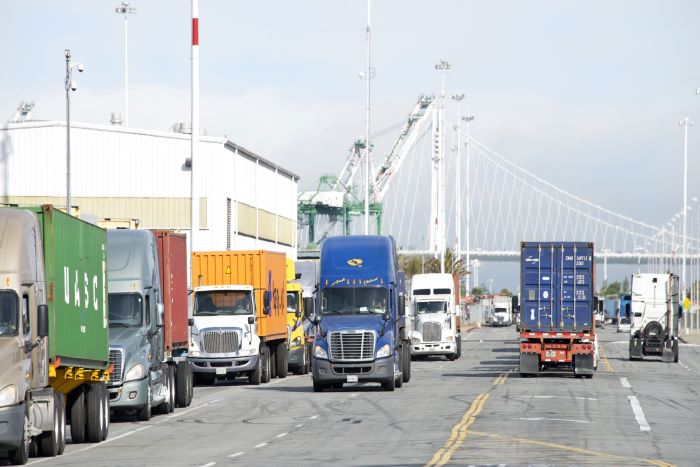 SSA Marine said truckers who participate in free flow drayage in West Coast ports such as Oakland (above) consistently achieve turn times of 15 to 20 minutes, compared with an hour or longer in conventional operations. Photo credit: Shutterstock.com.

SSA Marine is attempting to entice truckers and beneficial cargo owners (BCOs) to make greater use of its “free flow” container services in Long Beach, Oakland, and Seattle that boast turn times of 20 minutes or less, but operational inconsistencies are impeding its efforts.

In a free flow arrangement — also called a peel-off operation — a core group of BCOs and their truckers agree to pool their containers for each vessel call. When their containers are discharged from the vessel, they are segregated into a separate pile. Each pre-vetted trucker enters the terminal, proceeds directly to the pile, and takes delivery of the next container to come from the stack without regard to consignee or destination.

Sal Ferrigno, vice president of SSA Marine, said truckers who participate in free flow consistently achieve turn times of 15 to 20 minutes, compared with an hour or longer in conventional operations. “Free flow is by far the most efficient way of moving cargo,” he told JOC.com.

Most truckers are dispatched to a marine terminal with paperwork allowing them to take delivery of a specific container for a specific BCO. Normally, the BCO has a contractual relationship with the trucking company that includes proof of insurance, pre-vetted drivers, and drayage charges based on the distance of the trip.

Because each driver is assigned a specific container, the driver must often proceed deep into the terminal and wait while the longshore worker operating the rubber-tire gantry crane (RTG) moves containers around in a large stack to deliver a specific container to the driver, a process that can easily take an hour or longer.

In Los Angeles-Long Beach, the average truck turn time at the 12 container terminals in December was 67 minutes, which was actually close to a six-year low, according  to the Harbor Trucking Association.

SSA’s free flow operations each week handle about 1,000 containers at the Long Beach Pier A terminal, 500 containers at Pier J in Long Beach, 1,200 at its Oakland International Container Terminal, and 1,400 to 1,500 containers at T-18 in Seattle. Despite the proven benefits of participating in free flow, SSA cannot push the numbers higher.

“We’ve gotten to the point where it’s difficult to get more customers to do this,” Ferrigno said.

Three trucking representatives and two BCOs who spoke to JOC.com said that on paper, the free flow concept is great, and in those instances where it works, it delivers on the rapid turn times that are promised. However, the complexities involved in handling mega-ships of up to 14,000 TEU capacity that are operated by alliances with containers contributed by multiple shipping lines make it difficult to get more BCOs to sign on.

“We’re a big supporter of free flow,” said Weston LaBar, CEO of the Harbor Trucking Association. However, in order to make free flow work, vessel stowage is key. The containers of the free flow participants must be stowed in the same bay, which is difficult to arrange considering that vessels make several stops at Asian ports before heading to the West Coast.

At the terminal level in the United States, there must be a minimum quantity of about 50 containers to make it practical to assign a longshore worker to the free flow stack. Due to alliance arrangements, containers belonging to the BCO participants, even large retailers, are often spread over several vessels calling at different terminals each week.

“With the bigger ships and the alliances, it’s getting harder to meet the terminals’ requirements,” LaBar said.

A tire importer who uses free flow when possible said he may have 100 containers on a vessel, but due to multiple port calls in Asia, they may be scattered all over the vessel. Mega-ships that produce container exchanges of 10,000 or more in a single call can take three days or longer to work the entire vessel in Los Angeles-Long Beach, so it is often difficult to achieve the critical mass the terminal requires to form a free flow pile, the source said.

Most of the terminal operators in Los Angeles-Long Beach do some form of free flow, but they all struggle to increase participation in the program because of the difficulties they encounter in aggregating enough containers to achieve the critical mass needed to make it profitable, LaBar said.

However, that spawns other challenges. Four different BCOs may each have business relationships with two or more truckers based on the location of their warehouses, the distances from the ports, special needs such as ability to serve bonded warehouses, and relationships that call for the use of chassis provided by a specific equipment provider.

BCOs with specialized needs contract with trucking companies that have agreed to satisfy those needs, often at a premium rate, which is what drayage is all about, LaBar said. “We are a service, not a commodity,” he said.

An industry consultant who formerly served as head of logistics for a national retailer said free flow is a good program, and not all problems that are encountered have to be game breakers, but putting a deal together takes a lot of work and patience by all parties.

LaBar said the trucking association continues to support free flow at West Coast ports and has offered suggestions to terminal operators and BCOs to incrementally expand the service for the benefit of the BCOs, truckers, and terminals. “It can be a win-win-win for all of us,” he said.