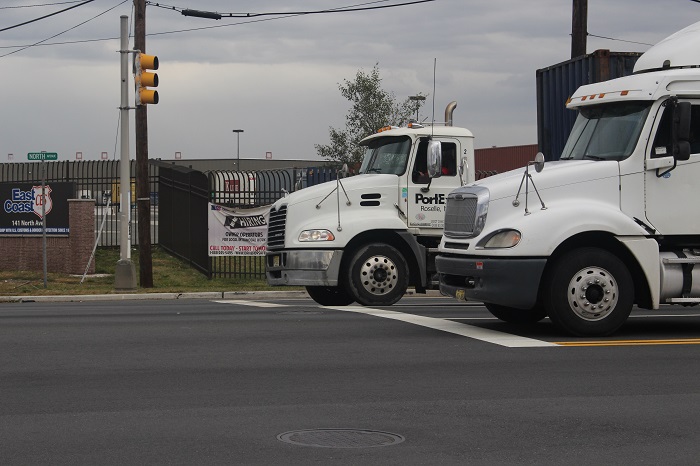 APM Terminals said conditions will get better, thanks to added labor and equipment and as components of a $200 million terminal upgrade come online. (Above: Trucks at the Port of New York and New Jersey.) Photo credit: Hugh R. Morley.

APM Terminals says congestion at its Port of New York and New Jersey facility will ease soon, following complaints from truckers and shippers that it’s taken weeks to get containerized imports.

APM Terminals, after more than three months of persistent problems, says conditions will get better thanks to added labor and equipment and as components of a $200 million terminal upgrade — including a new appointment system — come online. To hasten improvement, the terminal also has asked one ocean carrier to divert vessels to another terminal “for a few weeks to allow us to catch up,” APM Terminals said.

The terminal says it is suffering from the combined effects of rising cargo, equipment problems, vessel bunching, and the ongoing terminal upgrade, as well as the more recent pressure of two three-day weeks due to the holiday. The terminal, which extended gate hours since November to help with the problem, also reduced gate hours after the holiday period, apparently because it reached a cap on the number of hours the Customs and Border Protection (CBP) agency could cover.

Yet frustration is rising among beneficial cargo owners (BCOs) and truckers, who say progress is slow and turn times are far longer than at other terminals, with sporadic cases of truckers waiting for 10 hours or more to get a container. The Association of Bi-State Motor Carriers, the largest drayage group in the port, which represents about 75 percent of drivers, said that although it has seen “some improvement” in APM Terminal's situation, the extended periods spent by drivers at the terminal is limiting drayage capacity and exacerbating the existing driver shortage in the port. Some drivers now refuse to go there, the association said.

David Gledhill, managing director of APM Terminals Elizabeth, LLC, said that “certainly since the uptick in volume we have experienced in the last quarter we have seen a deterioration on our truck turn times.” Loaded cargo through the port increased by 6.5 percent, to 3.77 million loaded TEU, in the first nine months of 2018 compared with the same period in 2017, according to figures from PIERS, a sister product of JOC.

“We understand the frustration of our landside customers,” he said. “Over the holiday period we have continued to handle vessels but were closed for roadside collections. This has obviously increased the number of imports in our yard.”

APM Terminals says that after suffering a shortage of labor last year, it has had enough workers since the start of 2019. Four rubber-tire gantry (RTG) cranes, out of eight ordered, are now in service at the terminal, and it expects another two to be available by the end of the week. The terminal said it also expects to receive two top loaders this week.

“We are therefore confident that we will continue to see improved service levels in the short term and over the course of the coming months,” Gledhill said.

Yet the persistent problems at APM Terminals roiled drivers at the monthly meeting of the Association of Bi-State Motor Carriers on Tuesday. The association, which tracks turn times at the port’s five main terminals but does not release them publicly, said members report that “the number of extended turn times at APM Terminals — those in excess of two hours — are close to double what we see at other terminals, so that's an area where we're lobbying for improvement."

“We’re not seeing any indications of overall improvement and would guess we’re still several weeks away from it,” the shipper said, adding that it’s taken 14 days to get other containers out. “It sounds like they’ve well over exceeded capacity and are completely buried.  We’ve experienced containers getting put in closed areas because there’s no other available real estate.” The terminal at present periodically closes areas of its yard so that it can focus on clearing other parts.

The terminals’ problems come as the port is facing the effects of a rise in cargo volume and a surge in the frequency of mega-vessel arrivals in the wake of the raising of the Bayonne Bridge, which for the first time enabled ships of greater than 9,500 TEU to reach three of the port’s main terminals — among them APM Terminals. That has sparked more than double the amount of mega-vessels calling at the port each month, although the average amount of cargo loaded and unloaded from each is not much larger than from smaller vessels in the past.

APM Terminals has continued to operate as it undergoes a major upgrade that includes new cranes, a revamped berth, and a new 24-lane gate system. APM Terminals in June began a nine-month, $10 million upgrade of its RTG crane fleet, and the new appointment system is expected to go online in March.

Several drivers at the association’s monthly meeting expressed frustration at APM Terminal’s inability to improve conditions. One 35-year veteran of providing drayage to the port, noting that one chassis provider had run out of chassis at one of its depots in the last week, said the combined effect of such incidents would hurt the port’s reputation.

“I don’t see how we can continue growth with the performance that’s going on right now,” the trucker said. “I think we are going to lose market share as a community unless we fix some of these problems that are currently happening. The customer doesn’t want to hear why they didn’t get their freight [or] the fact that they are closing areas at APM Terminals right now. Customers have deadlines. Once the vessel arrives, they are expecting to pick up that container on the first free date, not be told ‘It’s in a closed area and you can’t have it.’”

Another trucker at the meeting said he had drivers that waited 10 hours at APM and still did not get their boxes. He questioned why the terminal only opened until 10 a.m. Saturday after the recent holiday period.

APM Terminals has since November extended terminal gate hours in an effort to reduce the congestion, opening until 7 p.m. on weekdays, instead of closing at 5:30 p.m., and also opening the gates on Saturday. But the terminal reduced those hours over the holiday period, closing its gates at 5 p.m. during the week and opening on Saturday only until 10 a.m. The hour cutbacks occurred as Port Newark Container Terminals and Maher Terminals extended their gate hours to cope with increased demand from truckers after the Christmas and New Year holidays created two three-day weeks.

Some port stakeholders said they believed that APM Terminals had exceeded its extra hours allotted for extended gate situations by the CBP. The agency, which is stretched as part of the federal government shutdown, operates a gate that contains a passive radiation detection device that scrutinizes all containers for potential bombs as they leave. Another terminal said it has not had any problem getting CBP to cover extended gates but believes the future is uncertain if the shutdown continues.

“Although we have had to make some reductions in our operating hours, we are grateful for the continued support we have from CBP during the evenings and on Saturdays,” Gledhill said.

A statement by CBP said it “has accommodated all additional requests by marine terminals in the Port of New York/Newark without a reduction in service.”

Some shippers are still waiting to get their boxes. One shipper said this week that an import box unloaded on Dec. 20, ready to be transported by rail, remains in the APM Terminals yard, and the only explanation that it has received from the ocean carrier is “congestion” and “terminal error.”

Another BCO said it has not yet been able to pick up five containers that arrived on Dec. 28. But others that arrived on Jan. 2 were available the next day, the BCO said. Still, with trucker turn times above two hours, “We are going to switch ocean carriers temporarily in that lane to avoid APM,” the shipper said.

funniest thing i ever read